If you programmed in versions of VB prior to .NET, you might know that VB supported multiple threads within a COM container, such as MTS or COM+. Well, although multiple threads were supported by VB5/6, the threading model they supported was Single Threaded Apartments (STA). If you come from Visual C++ then you'd have options to build both MTA (Multi Threaded Apartments) and STA applications. However, the .NET Framework does not retain the concept of Apartments and it manages all of the threads within AppDomains. By default, all .NET applications are multithreaded and any code can access any object at any time. Thus, we have to be very careful with static resources in the managed code.

If you have ever programmed multithreaded programs using the Win32 APIs, you may remember that Win32 supported user-interface threads and worker threads. As you learned in Chapter 1, the threading names have now changed into Apartment Model Threading and Free Threading respectively. The .NET Framework supports two basic threading models, which are Apartment Model Threaded or Single Threaded Apartment (STA) components, and Free Threaded or Multi Threaded Apartment (MTA) components. When we create a thread in .NET, by default it is an MTA thread.

You should only use the STA threading model when you're going to access STA-based COM components such as VB6 COM components. Otherwise, you shouldn't mark the current thread as STA, since it involves a significant performance hit to the application.

To reiterate what you learned earlier, an apartment is the logical container within the AppDomain for sharing threads in the same context. Objects reside inside an AppDomain and the context is created when an object is created during the activation process. 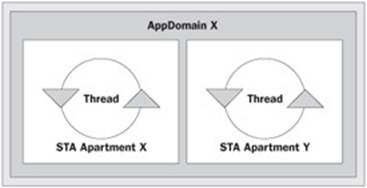 In STA threading, all the calls to a thread will be placed in a queue and the calls will be processed one by one. Therefore, the STA thread will never execute multiple methods simultaneously. STA threads have their own private data and they don't share data between threads. This makes the threading model safe and avoids any data corruption and synchronization problems. However, this does restrict the options available to the developer, and performance suffers, as data has to be copied with every thread created.

As you can see from the diagram, AppDomain X has two STA threads, X and Y, running inside, and each of the STA Apartments has only one thread. The term Thread Affinity is used when defining the relationship between the thread and the code that creates the thread. When a call is made to an STA apartment thread, then calls between the caller and the thread are handled by the contexts in the AppDomain, and the contexts maintain the thread affinity.

If you want to specify that you are using the Apartment Threading model, then apply the STAThreadAttribute attribute on the method.


This attribute should only be used if we're trying to access legacy STA components from the managed code. Otherwise, mark the method as MTAThreadAttribute:

The same principal applies for ASP.NET applications. If your ASP.NET page is accessing an STA COM component, then you have to use the ASPCompat directive at the top of the ASP.NET page:

When you mark the ASP.NET page to run under the STA threading model, the performance of the application may suffer.

The biggest difference between an STA and an MTA threaded apartment is that an MTA apartment can have more than one thread running simultaneously in the same apartment using all the shared data available in the apartment. This is illustrated in Figure 2. 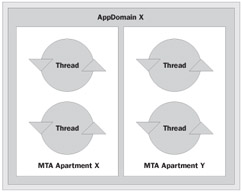 Since the MTA model supports simultaneous multiple thread execution, it becomes the caller's responsibility to synchronize the global data between multiple threads. Many of these issues were covered in the previous chapter.

As we've already learned, you should only mark the thread as STA thread if you are going to access an STA-threaded legacy COM component. Otherwise, your threading model is in the default MTA threading model.

In this section, we'll talk about real threading considerations and issues. Before you start developing applications, you should ask yourself these questions:

Is it possible to subdivide the application to run on different threads?

If it is possible to subdivide, how do I subdivide and what are the criteria for subdividing?

What would be the relationship between the main thread and the worker threads? This defines how the tasks in the application will relate to each other.

You can determine the answer to the first question by inspecting the application. For example, does your application require heavy I/O operations, such as reading an XML file or querying a database, or perform a lot of CPU-intensive processing, such as encrypting and decrypting data, or hashing? If so, these operations could block your application's main thread.

If you've identified that parts of your application are potential candidates for separate threads, then you should ask yourself the following questions:

Does each of the tasks identified use separate global resources?

For example, if you've identified two potential threads for your application and they are both going to use the same global resource, such as a global variable or a DataSet object, then if both threads try to access the global resource at the same time, you could get inconsistent or corrupt data, as shown in the previous chapter. The only way to prevent this kind of problem is by using locks on the global resources, which could leave the other thread waiting. If both of the tasks are going to use the same global resource then it is not a good idea to break the task into two. For some resources, you could use the Monitor class to prevent the threads from locking up. Again, this was shown in Chapter 3.

Over how long a period may the thread need to be blocked?

In this case, the second task needs to wait for a long time before it can access the DataSet object, which happens only when the first task finishes its execution and releases the lock. This is a potential problem and it will likely remove the concurrency of your application. There is a better way to address this problem:

3. Fill the local DataSet with 50,000 rows from the database

In this way, we're not locking the global DataSet object until we need to update it and so we're reducing the time the lock on the global object is held.

Does the execution of one task depend on the other task?

We will detail each of these models, including some code so that you can see how they might be implemented in your applications.