Most traditional geodetic observations (e.g. height difference, directions, angles, distances) do not describe the absolute position of points, rather the relative geometrical relation among different points within the network. Necessary initial data are the minimum number of reference data needed to define the absolute position of the network with the respect to some specified reference system.

In surveying or geodetic problems, the unknown parameters in adjustment by elements are often chosen as the coordinates of network points. Networks, which lack sufficient initial datum parameters, are called free networks. A completely free network may freely translate, rotate and change.

The general model for a completely free network

where L denotes the reduced observations, ε is residual of each measurement,

are the unknown parameters (corrections to the unknown coordinates of network points) and A denotes the design matrix of the observation equations and will be singular, because

The rank defect of A:

is actually the same as the datum defect of the free network.

Under the least squares principle:

the coefficient matrix of the normal equation (

) will be singular for any positive matrix of weight matrix P. Consequently, the solution (

) of normal system equation is not be unique [Fan, 2003] and that why furthermore we should apply for these solutions the minimum-norm condition

where Q is a given symmetrical positive definite matrix. This unique solution

which satisfies both eq. (4) and (5) is called the minimum-norm least-squares solution. For Q = I,

From the defining equations (7), one can see that matrix D must be dependent on the structure of the design matrix A (the configuration of the network). This gives us the possibility to find out the elements of D for different types of free networks, where the coordinates of all unknown points are treated as unknown parameters in the observation equations.

The four initial data in a second dimensional free network correspond to a 2D planar transformation. Based on this, let (

is the number of the unknown points. The minimum norm condition when Q=I becomes:

), small rotation angle (a) and a small scale change (s):

from where the correction equations becomes:

In this condition eq. (9) becomes a function of four variables (

). The minimum of this function can be achieved when the derivatives of F with respect to each of the four parameters are zero in the same time:

and rewriting all equations in matrix notations will lead finally to:

Similarly one can analyse the observation equations of the other types of free networks:

Free network has insufficient reference datum. Therefore the uniquely defined minimum-norm least-squares solution given in eq 6) implies that a reference datum has somehow been establish mathematically. By looking at the form of matrix D from eq 17), one may find out the geodetic implications of

) before the adjustment and adjusted coordinates (

) after the adjustment process which are linked each other by eq 10).

(before the adjustment) and

and the corresponding azimuth of the two radial vectors 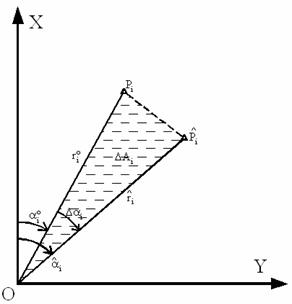 Let now to insert the corrections from eq 10) in the first two relations of eq.(14):

and then dividing by k (number of points), we will obtain that the arithmetic mean of the coordinates after adjustment and before adjustment remains constant:

The last equation expresses nothing else that the geometrical center of the triangulation network remains fixed in free networks adjustment, in this way the absolute location of the network is implicitly established.

Now let start from eq. (19) where the adjusted coordinates are replaced using the same eq 10):

and making an extension in series around the approximate coordinates (

Make a summation for all network points, the total area A becomes:

which reveals that the whole geodetic network has zero rotation during free network adjustment, although each individual radial vector from the origin to each point of the network may have undertaken a small rotation.

For the last relation given in eq 10), we consider the squared radial distances [see eq.(18)]:

which implies that the sum of all squared radial distances remains fixed in free network adjustment and the scale of the network is then defined.

From mathematical point of view, free network adjustment solution is perfectly demonstrated, using the minimum-norm least-squares inverse. Even in the networks with lacks sufficient reference datum the minimum-norm least-squares solution solves this problem somehow, but from geodetic point of view this is questionable because all four parameters (the origin of coordinate system, the orientation and the scale) are created artificially.

Free networks as trilateration networks or triangulation networks with some distance measurements do not lack scale datum, so the problem is reduced to establish the position and the orientation based on the first two upper conclusions.

The three dimensional free network can be viewed as the general case which includes even the 1D leveling networks as well as the 2D triangulation or/and trilateration networks. Photogrammetric bundle adjustment with relative orientation and without absolute orientation is one example where completely free 3D networks are involved [Papo, 1982].

[2] Bjerhammar A., Theory of errors and Generalized Matrix Inverses. 1973, Elsevier, .