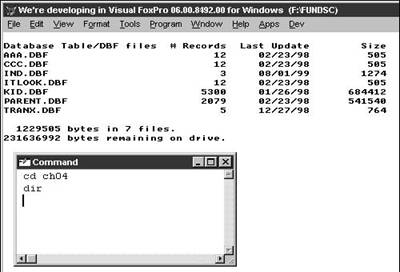 Another example is issuing a command to run a program. For example, typing help and pressing Enter will bring forward the Visual Studio MSDN Library help window. See Figure 2.2. In this particular case, its actually a separate application (you can see a new icon in the taskbar and the task-switching window). 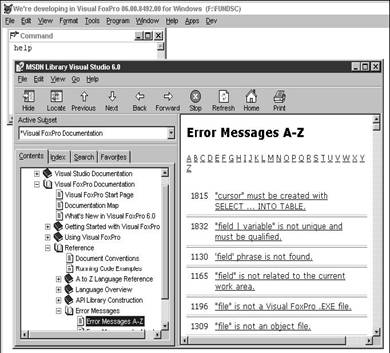 Both DIR and HELP are commandsthey tell VFP to do something. However, you can work with functions and expressions in the Command window as well. The ? command, in concert with an expression, echoes the result of that expression to the VFP desktop. For example, entering the command:

into the Command window and pressing Enter will display the result of the UPPER() function being applied to the text string a lower case string. See Figure 2.3. (In between each of these screen shots, I used the CLEAR command to clear the VFP desktop of the results of the commands Ive executed.)

If youve been following along and entering these commands yourself, youll see that all of the commands youve entered will be visible in the Command window. By default, the Command window retains all of the previously entered commands, which is incredibly handy. To execute a command again, all you have to do is move your cursor to a previous command and press Enter. Furthermore, you can edit that command and execute the modified version just by pressing Enter. I remember the old days when you had to type a long command in by hand each timequite a nuisance when the only difference between the two commands was the name of a field or a missing comma.

The Fundamentals of Visual FoxPro 6.0 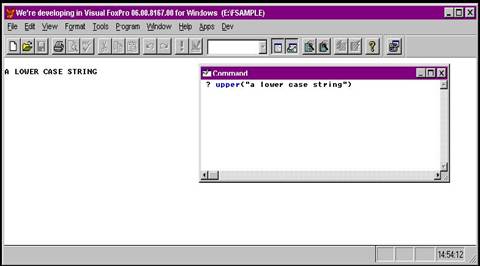 If you examine the other menu options in the Command window context menu, youll see the standard Cut, Copy, and Paste functions, just as you would expect in any type of text or editing window. Click the Build Expression menu option to open a dialog that allows you to build VFP expressions by picking and choosing from lists of functions and operators.

The Expression Builder dialog box opened from the Command window

The Execute Selection menu option allows you to highlight a block of text in the Command window and execute it, all in one step. This is handy for executing several commands at once; before this functionality was available, youd have to (1) open up an empty program file window, (2) copy the series of commands into that window, (3) save that file, and (4) run it. This was about three steps too many for most people. Furthermore, you ended up with a ton of files in the current directory with names like XXX.PRG, DELETEME.PRG, and JUNK.PRG.

is used for program file and text file windows as well, and the options dont apply to the
Command window.

The drag-and-drop editing feature is one that Ive overlooked until recently. When this feature is enabled, you can highlight a block of text, right-click in the middle of the highlighted block, and then drag a copy of that block to another locationeither in the Command window or to another window altogether. My Ctrl+C and Ctrl+V key combinations see considerably less wear these days.

You arent limited to dragging within Visual FoxPro anymore. As I was writing

this chapter, I didnt cut and paste (or, <gasp>, retype!) any code. Instead, I dragged code snippets from VFP into Word. This capability is called OLE Drag and Drop, and is new to VFP 6.