group A ñ was treated with IECA + diuretics +/- digoxin +/- nitrate;

Numerous clinical trials have shown that IECA confer considerable sustained survival benefits in patients with cardiac heart failure (CHF) and are asociated with reductions in all cause mortality, disease progresion and hospitalizations in most CHF patient populations.

This study is following the IECA efficiency at hypertensive patients with CHF.

We included in the study 159 hypertensive patients with different grades of heart failure found in the health care of the general practioniers. The patients were: 57(36%) men and 102(64%) women. 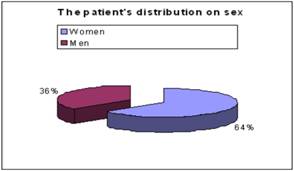 The distribution on ages of patients was the following: 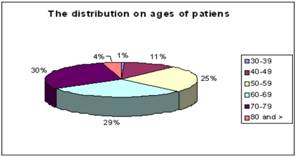 The patients were divided in two groups:

In group A there have been administered the following IECA: 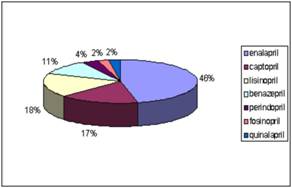 Both groups have been followed for 8 months.

In this period of time in both groups was followed the next parameters:

the number of their own presentations at the practionier due to subjective simptoms;

After eight months from the begining of the treatment, the results between group A and group B were different. The number and percent of patients NYHA-classes was as followed:

Group A ñ initially had a number of: 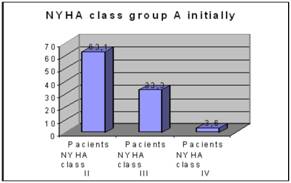 At the end of the eight months, the distribution on NYHA classes was: 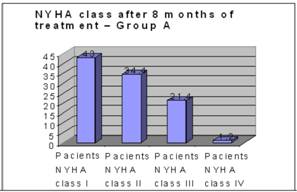 Group B ñ initially had a number of: 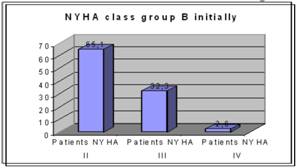 After the treatment, the distribution of NYHA classes has been the next: 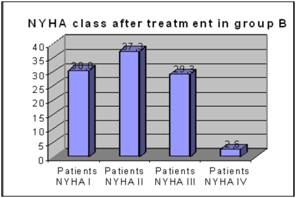 The number of presentations of their own initiative at the general practioner, due of the appearance of an obvious symptomatology was of 26 (30,9%) in group A and of 41(54,6%) in group B. 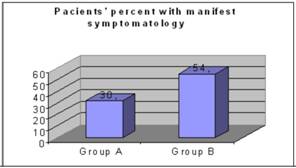 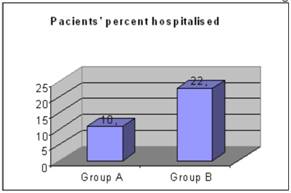 The average number of hospitalisation days in group A has been 7 days, and in group B has been 11 days. 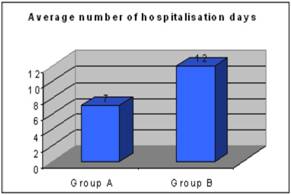 A total number of hospitalization days in group A has been 63 days while in group B has been 187 days. 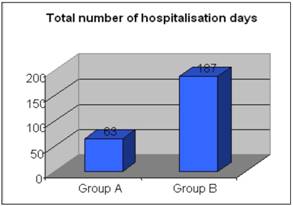 In group A have been registered majore cardiovascular events (acute myocardial infarction, unstable pectoris angina, stroke) at 3 pacients while in group B at 4 pacients. 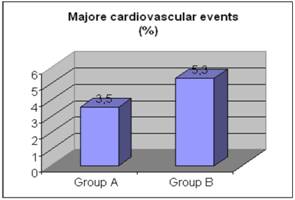 It is noticed a significant improvement of NYHA class in group A which received IECA as treatment compared with group B. This improvement has an obvious correspondent in patients symptomatology, near the dyspnea reducing the others subjective accusations (chest pain, palpitations, physical astenia, fatique).

Tensional values have reduced moderately during the evolution without appearence simptomatic hipotencion. This is due to the applicatated therapeutical strategy too initially administrating reduced doses of IECA that we progressively rised.

Number of presentation of their own at the practionier because of manifest simptomatology was of 26 (30,9%) in group A compared with group B of 41 (54,6%).

The percent of the major cardiovascular events registered in group A was of 3,58% compared of 5,34% in group B. IECA reduce efficiently the blood pressure, have a very good effect upon the parameters of atheroscleroses.

It hasnít been noticed the development of tolerance at the treatment with IECA after 8 months, at none of the patients in group A. Among the adverse effects of the treatment with IECA most frequently seen was dry cough, phenomen due to the excess of bradichinine ñ produced by these. The dry cough has been seen at 7 patients ñ 8,34% (4 women and 3 men), hasnít needed interruption of the treatment but only the doses modify or the change of the administrated IECA type.

Analysing the obtained datas with the ones in the literature, it can be said that considering the investigated parametres, they are similar or superior to the reported datas in other studies. The interpretation must be done obviously considering the reduce relative number of studied cases compared with the investigated cases in great trials that proved the efficacity IECA in the treatment of the hypertensive patients and of those with heart failure.

The administration of IECA at the hypertensive patients with cardiac failure has a benefic effect determed:

the improvement of NYHA class ;

the reducing with time of the dose and the frequency of the diuretics administration ;

the reducing of the major cardiovascular rate events;

incipient stages of cardiac failure, the early treatment with IECA reduce its progretion;

the improvement of the symptomatology and the quality of the life.

In the ambulatory following of the patients the most important role has the general practitioner. A constant care of the general practitioner will be represented by the sanitary education of the patient, the accurate information regarding his disease, the risk factors and the recovering methods, trying this way to gain their trust in the proposed therapeutical programme. The accurate supervising of the patient in ambulatory is one of the main methods of remove of the cardiovascular complications of HTA, so to reduce the mortality at this group of patients.