Fourier representation of a periodic pulse-train

In Chapter 3, the Fourier representation (analysis) of a periodic signal was developed. The basis functions were defined to be the complex exponential basis functions

which form an orthogonal set. The synthesis formula (Eq. 3.27) is given by:

where the analysis formula satisfies:

which defines the amplitude of the kth harmonic which is physically at frequency fk = k f0, where f0= 1/T0 with T0 being the fundamental period. Using Euler’s equation, that states that

the Fourier series can, if desired, be expressed in terms of cosines and series.

In Section 3.6.1, the Fourier series of a periodic pulse was derived. Specifically, for a continuous-time signal x(t) having the waveform (called 50% duty cycle):

The Fourier coefficients are computed as follows for k¹0:

The magnitude spectrum is given in Figure 3-16 and interpreted below, assuming T0=1/25.

Figure 2: Magnitude spectrum of the signal shown in Figure 1.

What if T0 ¥. What is the resulting Fourier series and magnitude spectrum. Does it make sense?

Consider another modified version of x(t) shown below. Predict the resulting spectral representation and validate with formal computation?

The analysis requested in Question 3 relates to the analysis equation. How could you demonstrate that the answer makes sense in the context of the synthesis equation?

Q. What if T0 ¥. What is the resulting Fourier series and magnitude spectrum. Does it make sense?

Q. Consider another modified version of x(t) shown below. Predict the resulting spectral representation and validate with formal computation?

A.      The modified signal is equal to the original x(t) shift in time by T0/4 seconds. The Fourier coefficients can be computed as shown below. For k¹0:

which also introduces the classic sin(x)/x or sinc(x) function. The DC term is computed to be:

as before. The coefficients ak can then be computed to be ak = with all the even coefficients (except a0) having a value of zero.

The synthesis equation, therefore, is given by

The magnitude response is sketched below (based on the exponential form):

which is identical to that shown in Figure 2. The signals associated with these two graphs therefore identical. Well, no. While agreeing in magnitude response, the phase responses are 90 apart. The 90 difference is due to the T0/4 temporal delay between the two signals.

Q. The analysis requested in Question 3 relates to the analysis equation. How could you demonstrate that the answer makes sense in the context of the synthesis equation?

A. Using a general purpose computer, the signal x(t) described by the synthesis equation can be generated and displayed. The following MatLab program was created and executed. The results are shown below. 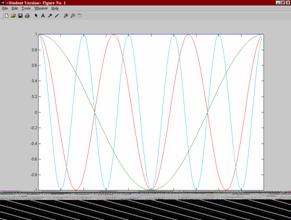 Motivation: The production of frequency-domain representation of periodic continuous-time signals has been presented and exemplified. However, because the Fourier coefficient production rules are based on calculus (integration), the analysis technique does not easily lend itself to analysis by a general-purpose digital computer. Discrete-time signals, however, do admit digital computer analysis. The theory upon which the discrete-time signals are created, called the Sampling Theorem, is the logically the next topic of study.