from shock and hemorrhage. In each case, there is a profound imbalance between myocardial oxygen supply and demand. 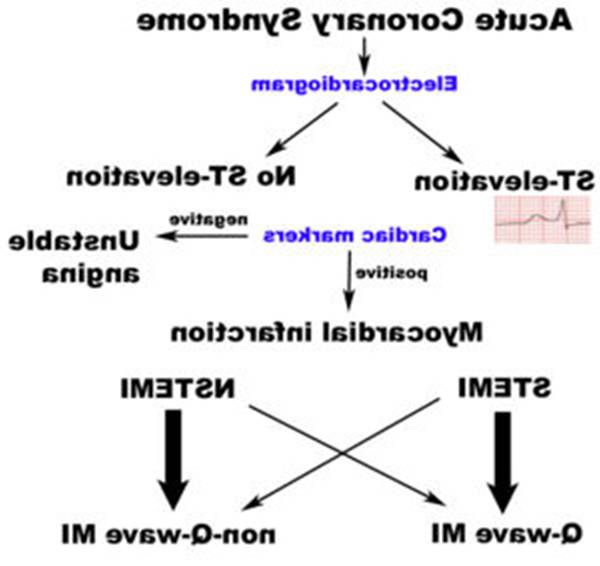 Depending on the location of the obstruction in the coronary circulation, different zones of the heart can become injured. Using the anatomical terms of location, one can

describe anterior, inferior, lateral, apical and septal infarctions (and combinations, such as anteroinferior, anterolateral, and so on). For example, an occlusion of the left anterior descending coronary artery will result in an anterior wall myocardial infarct.

The phrase 'massive attack' is not a recognized medical term.

The patient with myocardial infarction is usually male, over 40, and has atherosclerosis of the coronary vessels, often with arterial hypertension. Attacks also occur in women and in younger men in their early 30s or even 20s. Women who take oral contraceptives and also smoke are at very high risk. Overall, however, the rate of myocardial infarction is greater in men than in women at all ages.

Continuous chest pain, characterized by a sudden onset, usually over the lower sternal region and the upper abdomen, is the primary presenting symptom. The pain may increase steadily in severity until it becomes almost unbearable. It is a heavy, viselike pain, which may radiate to the shoulders and down the arms, usually the left arm. Unlike the pain of true angina, it begins spontaneously (not after effort, emotional upset, and the like), persists for hours or days, and is relieved neither by rest nor by nitroglycerin. In some cases the pain may radiate to the jaw and neck. The pain is often accompanied by shortness of breath; pallor; cold, clammy diaphoresis; dizziness or light-headedness; and nausea and vomiting.

The patient with diabetes mellitus may not experience severe pain with myocardial infarction. The neuropathy that accompanies diabetes can interfere with neuroreceptors, thus dulling the pain experience.

The elderly patient may not experience the typical viselike pain associated with myocardial infarction because of the diminished responses of neurotransmitters that occur in the aging process. Often the pain is atypical, such as jaw pain, or fainting may be experienced.

The arteriosclerosis that accompanies aging may compromise tissue perfusion because of increased peripheral vascular resistance. Because elderly patients may have

a well  established collateral circulation of the myocardium, they often are spared the lethal complications associated with myocardial infarction.

Diagnosis of myocardial infarction is generally based on history of  the present illness, electrocardigram, and serial serum enzymes. Prognosis depends on the severity of coronary artery obstruction and hence the extent of myocardial damage. Physical examination is always conducted but alone is insufficient to confirm diagnosis.

the history of the present illness

the history of previous illnesses and family health history, particularly related to the incidence of heart disease in the family

Previous history often can provide valuable information about the patient s risk factors or coronary heart disease. The history of the present illness is in many cases conclusive for the diagnosis of myocardial infarction.

The patient s history provides subjective data. The careful practitioner follows the history with interpretation of objective data offered by the ECG and serial enzyme studies.

The Electrocardiogram. The ECG provides information about the electrophysiology of the heart. Through the use of serial readings, the physician is able to monitor the evolution and resolution of an MI. The location and relative size of the infarction also may be determined by ECG.

The primary purpose of the electrocardiogram is to detect ischemia or acute coronary injury in broad, symptomatic emergency department populations. However, the standard 12 lead ECG has several limitations. An ECG represents a brief sample in time. Because unstable ischemic syndromes have rapidly changing supply versus demand characteristics, a single ECG may not accurately represent the entire picture. It

is therefore desirable to obtain serial 12 lead ECGs, particularly if the first ECG is obtained during a pain-free episode. Alternatively, many emergency departments and chest pain centers use computers capable of continuous ST segment monitoring.It should also be appreciated that the standard 12 lead ECG does not directly examine the right ventricle, and does a relatively poor job of examining the posterior basal and lateral walls of the left ventricle. In particular, acute myocardial infarction in the distribution of the circumflex artery is likely to produce a nondiagnostic ECG.The use of non-standard ECG leads like right-sided lead V4R and posterior leads V7, V8, and V9 may improve sensitivity for right ventricular and posterior myocardial infarction. In

spite of these limitations, the 12 lead ECG stands at the center of risk stratification for the patient with suspected acute myocardial infarction. Mistakes in interpretation are relatively common, and the failure to identify high risk features has a negative effect on the quality of patient care.The 12 lead ECG is used to classify patients into one of three groups:

1. those with ST segment elevation or new bundle branch block (suspicious for acute injury and a possible candidate for acute reperfusion therapy with thrombolytics or primary PCI),

2. those with ST segment depression or T wave inversion (suspicious for ischemia), and

3. those with a so-called non-diagnostic or normal ECG.

common cause of ST segment elevation in chest pain patients.In addition, over 90% of healthy men have at least 1 mm (0.1 mV) of ST segment elevation in at least one precordial lead. The clinician must therefore be well versed in recognizing the so-called ECG mimics of acute myocardial infarction, which include left ventricular hypertrophy, left bundle branch block, paced rhythm, benign early repolarization, pericarditis, hyperkalemia, and ventricular aneurysm.

Serum Enzymes and Isoenzymes Serial enzyme studies include the following

Creatine Kinase - Total: The total CK is a simple and inexpensive test that is readily available using many laboratory instruments. However, an elevation in total CK

is not specific for myocardial injury, because most CK is located in skeletal muscle, and elevations are possible from a variety of non-cardiac conditions.

Creatine Kinase - MB Fraction Creatine kinase can be further subdivided into three isoenzymes: MM, MB, and BB. The MM fraction is present in both cardiac and skeletal muscle, but the MB fraction is much more specific for cardiac muscle: about 15 to 40% of CK in cardiac muscle is MB, while less than 2% in skeletal muscle is MB. The BB fraction (found in brain, bowel, and bladder) is not routinely measured. Thus, CK-MB is a very good marker for acute myocardial injury, because of its excellent specificity, and it rises in serum within 2 to 8 hours of onset of acute myocardial infarction. Serial measurements every 2 to 4 hours for a period of 9 to 12 hours after the patient is first seen will provide a pattern to determine whether the CK-MB is rising, indicative of myocardial injury. The CK-MB is also useful for diagnosis of reinfarction or extensive of an MI because it begins to fall after a day, dissipating in 1 to 3 days, so subsequent elevations are indicative of another event.

A 'cardiac index' can provide a useful indicator for early MI. This is calculated as a ratio of total CK to CK-MB, and is a sensitive indicator of myocardial injury when the CK-MB is elevated.

CK-MB Isoforms The CK-MB fraction exists in two isoforms called 1 and 2 identified by electrophoretic methodology. The ratio of isoform 2 to 1 can provide information about myocardial injury.

An isoform ratio of 1.5 or greater is an excellent indicator for early acute myocardial infarction. CK-MB isoform 2 demonstrates elevation even before CK-MB by laboratory testing. However, the disadvantage of this method is that it is skilled labor intensive because electrophoresis is required, and large numbers of samples cannot be run simultaneously nor continuously. False positive results with congestive heart failure and other conditions can occur.

Troponins: Troponin I and T are structural components of cardiac muscle. They are released into the bloodstream with myocardial injury. They are highly specific for myocardial injury--more so than CK-MB--and help to exclude elevations of CK with skeletal muscle trauma. Troponins will begin to increase following MI within 3 to 12 hours, about the same time frame as CK-MB. However, the rate of rise for early infarction may not be as dramatic as for CK-MB.

Troponins will remain elevated longer than CK--up to 5 to 9 days for troponin I and up to 2 weeks for troponin T. This makes troponins a superior marker for diagnosing myocardial infarction in the recent past--better than lactate dehydrogenase (LDH). However, this continued elevation has the disadvantage of making it more difficult to diagnose reinfarction or extension of infarction in a patient who has already suffered an initial MI. Troponin T lacks some specificity because elevations can appear with skeletal myopathies and with renal failure.

Myoglobin: Myoglobin is a protein found in skeletal and cardiac muscle which binds oxygen. It is a very sensitive indicator of muscle injury. The rise in myoglobin can help to determine the size of an infarction. A negative myoglobin can help to rule out myocardial infarction.. It is elevated even before CK-MB. However, it is not specific for cardiac muscle, and can be elevated with any form of injury to skeletal muscle.

Lactate dehydrogenase The LDH has been supplanted by other tests. It begins to rise in 12 to 24 hours following MI, and peaks in 2 to 3 days, gradually dissipating in 5 to 14 days. Measurement of LDH isoenzymes is necessary for greater specificity for cardiac injury. There are 5 isoenzymes (1 through 5). Ordinarily, isoenzyme 2 is greater than 1, but with myocardial injury, this pattern is 'flipped' and 1 is higher than 2. LDH-5 from liver may be increased with centrilobular necrosis from passive congestion with congestive heart failure following ischemic myocardial injury.

The next table shows the time courses of cardiac enzymes.

The goal medical management is to minimize myocardial damage. Minimizing myocardial damage is accomplished by relieving pain, providing rest, and preventing complications such as lethal dysrhythmias and cardiogenic shock.

The most critical period for the patient with an MI is the first 2 to 3 days after the attack. The area of infarction can increase in size for several hours or days after the onset of the attack. Cardiogenic shock and ventricular fibrillation are common causes of sudden death during this period.

patient is eligible based on exclusion criteria, and primary PCI is not immediately available. The effectiveness of thrombolytic therapy is highest in the first 2 hours. After 12 hours, the risk associated with thrombolytic therapy outweighs any benefit.Because irreversible injury occurs within 2–4 hours of the infarction, there is a limited window of time available for reperfusion to work.

Although no perfect thrombolytic agent exists, an ideal thrombolytic drug would lead to rapid reperfusion, have a high sustained patency rate, be specific for recent thrombi, be easily and rapidly administered, create a low risk for intra-cerebral and systemic bleeding, have no antigenicity, adverse hemodynamic effects, or clinically significant drug interactions, and be cost effective. Currently available thrombolytic agents include streptokinase, urokinase, and anistreplase (recombinant tissue plasminogen activator, t-PA). More recently, thrombolytic agents similar in structure to t-PA such as reteplase and tenecteplase have been used. These newer agents boast efficacy at least as good as rtPA with significantly easier administration. The thrombolytic agent used in a particular individual is based on institution preference and the age of the patient.

Depending on the thrombolytic agent being used, adjuvant anticoagulation with heparin or low molecular weight heparin may be of benefit. With t-PA and related agents (reteplase and tenecteplase), heparin is needed to maintain coronary artery patency. Because of the anticoagulant effect of fibrinogen depletion with streptokinase and urokinase treatment, it is less necessary there.

Intracranial bleeding (ICB) and subsequent cerebrovascular accident (CVA) is a serious side effect of thrombolytic use. The risk of ICB is dependent on a number of factors, including a previous episode of intracranial bleed, age of the individual, and the

thrombolytic regimen that is being used. In general, the risk of ICB due to thrombolytic use for the treatment of an acute myocardial infarction is between 0.5 and 1 percent.