ECOTOURISM IN ROMANIA AND THE DANUBE DELTA

ECOTOURISM IN AND THE DELTA 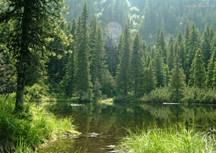 
More than 30% of the European population of brown bear, wolf and lynx live in !

More than 300 species of birds can be found in ’s Danube Delta!

There are estimated to be more than 12,000 caves in of which only half have been fully explored!

Ecotourism is a form of tourism in which the main motivation for the tourist is the observation and appreciation of nature and local tradition in natural areas. Ecotourism respects nature and rural culture, minimises the negative impact of these and contributes to nature conservation and protection. It supports local people, communities and businesses. It also has an educational component that creates awareness about nature and conservation, both for tourist and local communities.

What does the Association of Ecotourism in actually do?

The association of Ecotourism in Romania (AER) is committed to developing and promoting REAL ecotourism in . Its members participate at international travel trade exhibitions around Europe, promoting ecotourism as an activity and as an ecotourism destination. AER runs training sessions and holds seminars for ecotourism providers and other interested people, aimed at keeping standards at the highest level. In conjuction with the Romanian Environmental Partnership Foundation, small grants are available to help providers meet the higher standards.

The Danube Delta (Delta Dunarii in Romanian), split between Tulcea County of Romania and Odessa Oblast of Ukraine, is the largest and best preserved of European deltas, with an area of 3446 km˛, after the Volga Delta. The delta is located around the area where the Danube River flows into the Black Sea. 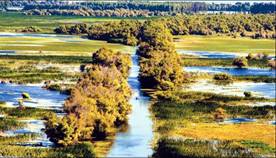 In 1991, the Romanian part of the Danube Delta became part of the the UNESCO list of World Heritage Sites. Around 2,733 km˛ of the delta are strictly protected areas.In 1998, under UNESCO Programme on Man and the Biosphere, the 626,403 hectares of Danube Delta were established as Biosphere Reserve shared by Romania and Ukraine.Historically, in Romania, part of Danube Delta was marked as a reserve back in 1938.In Ukraine, the Danube branch of Black Sea State Reserve was established in 1973. In 1981 it was reorganized into Natural Reserve 'Danube Fluxes', and in 1998 it was extended into Danube Biosphere Reserve.

Every year, the alluvium deposited by the Danube increases the width of the Delta by around 40 meters, making it extremely dynamic. Near Tulcea, the Danube is divided in three river branches before it flows into the Sea: Chilia, Sulina and Sfantu Gheorghe (Saint George), but many other channels split the Delta into areas with reed, marshes, islands and forests, some of which are flooded during the spring and autumn. 2,500 years ago Herodotus said that at that time the had seven branches flowing into the sea instead of the three that it has today. 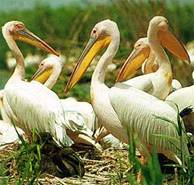 Currently there are two man-made navigation channels across the Danube Delta. Both of them are in the Romanian part of the delta. In , inaugurated work on the Bistroe Channel that would have provided an additional navigable link from the to the Ukrainian section of the Danube Delta. However, the European Union advised to shut it down, because the works may have done extensive damage to the fragile ecosystem of the Delta. The Romanian side said it may sue at the International Court of Justice. Under the presidency of Kuchma was responding that is just afraid of competition that the new channel will bring, and was working on the channel construction. Under the presidency of Yuschenko, who visited in 2005, both sides agree that professionals should decide the fate of the channel. In the long-run, plan to build a navigation channel, if not through Bistroe Channel then through another channel.

It hosts over 1,200 varieties of plants, 300 species of birds as well as 45 freshwater fish species in its numerous lakes and marshes. This is the place where millions of birds from different places of Earth (European, Asian, African, Mediteraneean) come to rest and eat during the migration seasons. Many others hatch here.

Around 15,000 people live in the Delta, most of them are living off fishing with their traditional wooden kayaks. It includes a community of Lippovans which are descendants of the Old Rite Followers who left Russia in to avoid religious persecutions. The main center of Lippovan community in the Ukrainian part of Danube Delta is Vilkovo.

Starting with the 15th century, the Danube Delta was part of the Ottoman Empire. In , following the Russo-Turkish War the borders of Ottoman and Russian Empires were set by Kilia and Old Stambul Channels of Danube, and in 1829 by Georgievsky Channel. The Treaty of Paris of which ended the Crimean War, Danube Delta together with two districts of Southern Bessarabia was included in the Principality of Moldavia and was established an international commission which made a series of works to help navigation. In 1859, it became part of the United Principalities of Wallachia and Moldavia. In , following the defeat of Ottoman Empire from

and , the border between those two was set again by Kilia and Old Stambul Channels.