THE DECLINE: An art movement in history seems like a wave that rises to a height, then breaks, falls, and parts of it are caught up from beneath to help form the strength of a new advance. In Italy Christianity was the propelling force of the wave. In the Early Renaissance, the antique, and the study of nature came in as additions. At Venice in the High Renaissance the art-for-art's-sake motive made the crest of light and color. The highest point was reached then, and there was nothing that could follow but the breaking and the scattering of the wave. This took place in Central Italy after 1540, in Venice after 1590.


Art had typified in form, thought, and expression everything of which the Italian race was capable. It had perfected all the graces and elegancies of line and color, and adorned them with a superlative splendor. There was nothing more to do. The idea was completed, the motive power had served its purpose, and that store of race-impulse which seems necessary to the making of every great art was exhausted. For the men that came after Michael Angelo and[123] Tintoretto there was nothing. All that they could do was to repeat what others had said, or to recombine the old thoughts and forms. This led inevitably to imitation, over-refinement of style, and conscious study of beauty, resulting in mannerism and affectation. Such qualities marked the art of those painters who came in the latter part of the sixteenth century and the first of the seventeenth. They were unfortunate men in the time of their birth. No painter could have been great in the seventeenth century of Italy. Art lay prone upon its face under Jesuit rule, and the late men were left upon the barren sands by the receding wave of the Renaissance. 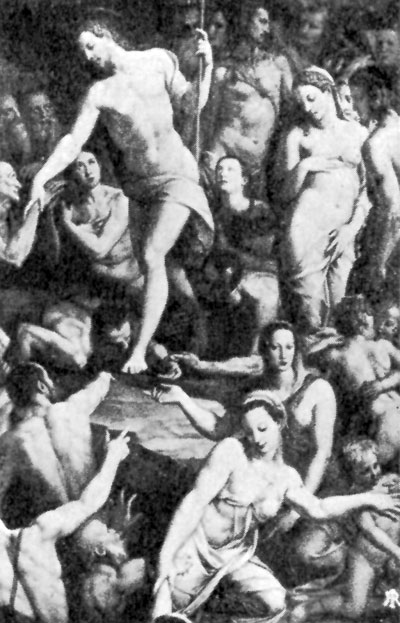 ART MOTIVES AND SUBJECTS: As before, the chief subject of the art of the Decadence was religion, with many heads and busts of the Madonna, though nature and the classic still played their parts. After the Reformation at the North the Church in Italy started the Counter-Reformation. One of the chief means employed by this Catholic reaction was the embellishment of church worship, and painting on a large scale, on panel rather than in fresco, was demanded for decorative purposes. But the religious motive had passed out, though its subject was retained, and[124] the pictorial motive had reached its climax at Venice. The faith of the one and the taste and skill of the other were not attainable by the late men, and, while consciously striving to achieve them, they fell into exaggerated sentiment and technical weakness. It seems perfectly apparent in their works that they had nothing of their own to say, and that they were trying to say over again what Michael Angelo, Correggio, and Titian had said before them much better. There were earnest men and good painters among them, but they could produce only the empty form of art. The spirit had fled.

THE MANNERISTS: Immediately after the High Renaissance leaders of Florence and Rome came the imitators and exaggerators of their styles. They produced large, crowded compositions, with a hasty facility of the brush and striking effects of light. Seeking the grand they overshot the temperate. Their elegance was affected, their sentiment forced, their brilliancy superficial glitter. When they thought to be ideal they lost themselves in incomprehensible allegories; when they thought to be real they grew prosaic in detail. These men are known in art history as the Mannerists, and the men whose works they imitated were chiefly Raphael, Michael Angelo, and Correggio. There were many of them, and some of them have already been spoken of as the followers of Michael Angelo.

Agnolo Bronzino (1502?-1572) was a pupil of Pontormo, and an imitator of Michael Angelo, painting in rather heavy colors with a thin brush. His characters were large, but never quite free from weakness, except in portraiture, where he appeared at his best. Vasari (1511-1574)Śthe same Vasari who wrote the lives of the paintersŚhad versatility and facility, but his superficial imitations of Michael Angelo were too grandiose in conception and too palpably false in modelling. Salviati (1510-1563) was a friend of Vasari, a painter of about the same cast of mind and[125] hand as Vasari, and Federigo Zucchero (1543-1609) belongs with him in producing things muscularly big but intellectually small. Baroccio (1528-1612), though classed among the Mannerists as an imitator of Correggio and Raphael, was really one of the strong men of the late times. There was affectation and sentimentality about his work, a prettiness of face, rosy flesh tints, and a general lightness of color, but he was a superior brushman, a good colorist, and, at times, a man of earnestness and power. 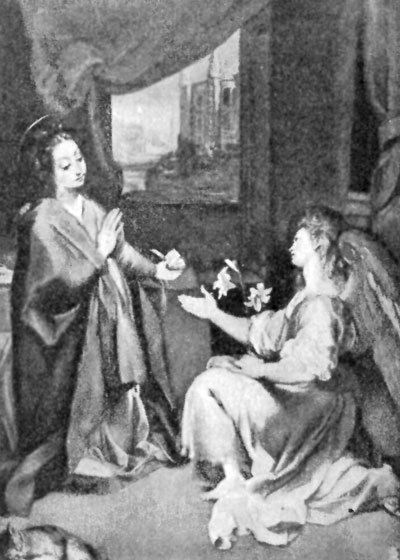 THE ECLECTICS: After the Mannerists came the Eclectics of Bologna, led by the Caracci, who, about 1585, sought to 'revive' art. They started out to correct the faults of the Mannerists, and yet their own art was based more on the art of their great predecessors than on nature. They thought to make a union of Renaissance excellences by combining Michael Angelo's line, Titian's color, Correggio's light-and-shade and Raphael's symmetry and grace. The attempt was praiseworthy for the time, but hardly successful. They caught the lines and lights and colors of the great men, but they overlooked the fact that the excellence of the imitated lay largely in[126] their inimitable individualities, which could not be combined. The Eclectic work was done with intelligence, but their system was against them and their baroque age was against them. Midway in their career the Caracci themselves modified their eclecticism and placed more reliance upon nature. But their pupils paid little heed to the modification.

There were five of the Caracci, but three of themŚLudovico (1555-1619), Agostino (1557-1602), and Annibale (1560-1609)Śled the school, and of these Annibale was the most distinguished. They had many pupils, and their influence was widely spread over Italy. In Sir Joshua Reynolds's day they were ranked with Raphael, but at the present time criticism places them where they belongŚpainters of the Decadence with little originality or spontaneity in their art, though much technical skill. Domenichino (1581-1641) was the strongest of the pupils. His St. Jerome was rated by Poussin as one of the three great paintings of the world, but it never deserved such rank. It is powerfully composed, but poor in coloring and handling. The painter had great repute in his time, and was one of the best of the seventeenth century men. Guido Reni (1575-1642) was a painter of many gifts and accomplishments, combined with many weaknesses. His works are well composed and painted, but excessive in sentiment and overdone in pathos. Albani (1578-1660) ran to elegance and a porcelain-like prettiness. Guercino (1591-1666) was originally of the Eclectic School at Bologna, but later took up with the methods of the Naturalists at Naples. He was a painter of far more than the average ability. Sassoferrato (1605-1685) and Carlo Dolci (1616-1686) were so super-saturated with sentimentality that often their skill as painters is overlooked or forgotten. In spirit they were about the weakest of the century. There were other eclectic schools started throughout ItalyŚat Milan, Cremona,[127] FerraraŚbut they produced little worth recording. At Rome certain painters like Cristofano Allori (1577-1621), an exceptionally strong man for the time, Berrettini (1596-1669), and Maratta (1625-1713), manufactured a facile kind of painting from what was attractive in the various schools, but it was never other than meretricious work. 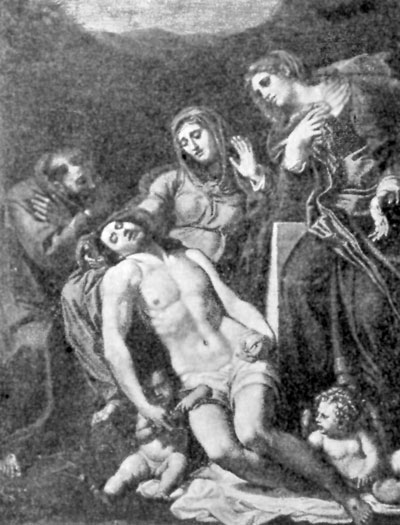 THE NATURALISTS: Contemporary with the Eclectics sprang up the Neapolitan school of the Naturalists, led by Caravaggio (1569-1609) and his pupils. These schools opposed each other, and yet influenced each other. Especially was this true with the later men, who took what was best in both schools. The Naturalists were, perhaps, more firmly based upon nature than the Bolognese Eclectics.[128] Their aim was to take nature as they found it, and yet, in conformity with the extravagance of the age, they depicted extravagant nature. Caravaggio thought to represent sacred scenes more truthfully by taking his models from the harsh street life about him and giving types of saints and apostles from Neapolitan brawlers and bandits. It was a brutal, coarse representation, rather fierce in mood and impetuous in action, yet not without a good deal of tragic power. His subjects were rather dismal or morose, but there was knowledge in the drawing of them, some good color and brush-work and a peculiar darkness of shadow masses (originally gained from Giorgione), that stood as an ear-mark of his whole school. From the continuous use of black shadows the school got the name of the 'Darklings,' by which they are still known. Giordano (1632-1705), a painter of prodigious facility and invention, Salvator Rosa (1615-1673), best known as one of the early painters of landscape, and Ribera, a Spanish painter, were the principal pupils.

THE LATE VENETIANS: The Decadence at Venice, like the Renaissance, came later than at Florence, but after the death of Tintoretto mannerisms and the imitation of the great men did away with originality. There was still much color left, and fine ceiling decorations were done, but the nobility and calm splendor of Titian's days had passed. Palma il Giovine (1544-1628) with a hasty brush produced imitations of Tintoretto with some grace and force, and in remarkable quantity. He and Tintoretto were the most rapid and productive painters of the century; but Palma's was not good in spirit, though quite dashing in technic. Padovanino (1590-1650) was more of a Titian follower, but, like all the other painters of the time, he was proficient with the brush and lacking in the stronger mental elements. The last great Italian painter was Tiepolo (1696-1770), and he was really great[129] beyond his age. With an art founded on Paolo Veronese, he produced decorative ceilings and panels of high quality, with wonderful invention, a limpid brush, and a light flaky color peculiarly appropriate to the walls of churches and palaces. He was, especially in easel pictures, a brilliant, vivacious brushman, full of dash and spirit, tempered by a large knowledge of what was true and pictorial. Some of his best pictures are still in Venice, and modern painters are unstinted in their praise of them. He left a son, Domenico Tiepolo (1726-1795), who followed his methods. In the late days of Venetian painting, Canaletto (1697-1768) and Guardi (1712-1793) achieved reputation by painting Venetian canals and architecture with much color effect. 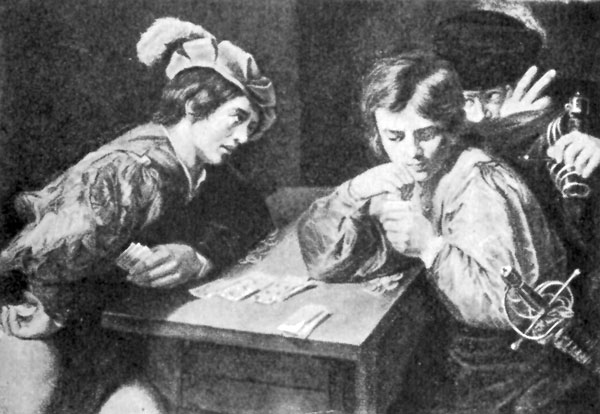 NINETEENTH-CENTURY PAINTING IN ITALY: There is little in the art of Italy during the present century that shows a positive national spirit. It has been leaning on the rest of Europe for many years, and the best that the living[130] painters show is largely an echo of Dusseldorf, Munich, or Paris. The revived classicism of David in France affected nineteenth-century painting in Italy somewhat. Then it was swayed by Cornelius and Overbeck from Germany. Morelli (1826-[2]) shows this latter influence, though one of the most important of the living men.[3] In the 1860's Mariano Fortuny, a Spaniard at Rome, led the younger element in the glittering and the sparkling, and this style mingled with much that is more strikingly Parisian than Italian, may be found in the works of painters like Michetti, De Nittis (1846-1884), Favretto, Tito, Nono, Simonetti, and others.

Of recent days the impressionistic view of light and color has had its influence; but the Italian work at its best is below that of France. Segantini[4] was one of the most promising of the younger men in subjects that have an archaic air about them. Boldini, though Italian born and originally following Fortuny's example, is really more Parisian than anything else. He is an artist of much power and technical strength in genre subjects and portraits. The newer men are Fragiocomo, Fattori, Mancini, Marchetti.

Only works in public places are given. Those in private hands change too often for record here. For detailed list of works see Champlin and Perkins, Cyclopedia of Painters and Paintings.