The 1960s began modestly, with only the vaguest hints of what was to come. Young people everywhere stopped thinking about themselves, and began to think about how to change the world, often in shocking and unexpected ways. By turning fashion inside out, they found an unexpected way to stir up society. Dissent was growing, but many were still happy to buy into the Camelot facade of the Kennedy era. Jackie Kennedy was a huge celebrity, famed for her gentility and classic Chanel suits. But, bubbling beneath the surface, the Civil Rights movement was brewing and revolution was hip. Music, literature, and art became hugely experimental. The Beatles, Bob Dylan, Motown, Andy Warhol-all struck a chord within a society looking for change.

From the complacent culture of the in the 1950’s with its images of the man in the grey flannel suit, suburban living, Cold War politics, and Eisenhower conservatism, arose a new feeling under the idealistic leadership of John F. Kennedy. Suddenly, there was a new feeling of commitment to human concerns. This was reflected in the founding of the Peace Corps, the opening of the civil rights movement, and the commitment of the nation to the defence of freedom in the world.

After the shock of the assassination of President Kennedy and the escalation of the war in , there was a more violent and militant support of the new ways of thinking. By the summer of 1967 the hippies fled to gathering places like and the . The climax of these gatherings took place in , in 1969. For the first time in history, the work ethic, competitive capitalism, and the values of materialism were ignored. An entire generation had thought that they had successfully turned against the establishment.

People thirsted for social freedom and self-expression. Just a few years into the 1960s, the pill-boxed silhouette of the Kennedy era was discarded for experimental fashion, pioneered by designers such as Mary Quant. Best known for introducing the mini-skirt, Quant also promoted the use of wild geometric prints on waif-like models such as Twiggy. And as interest grew in our quest for the moon, so did the number of space-influenced designs. But as many looked forward, some designers also looked to the past or to other cultures. Later in the decade as the Hippie movement caught on, flower children everywhere demanded more organic fashions.


The 1960's, and boot wearing become an established part of fashion for the next twenty years. Go-go boots were popularized by Nancy Sinatra's song, 'These Boots Were Made For Walking,' and soon became a symbol of the 1960s. A white, flat-heeled version of the boot was first created by designer Andres Courreges. Other designers followed suit with boots in a variety of colors, materials, and styles. Shoes became chunkier with thicker, lower heels and rounded or squared toes. Small platform soles were beginning to appear on some styles. Buckle shoes in patent became very fashionable and some styles were made with silver or gold colored heels to match the buckles.

Like the men of this period, women’s shoes are hard to classify into a distinct look. The conservative woman clung to the thin-heeled stiletto, though in a shorter version than in the fifties. In 1965, trousers became acceptable wear for women in both formal and casual wear. Slip-on shoes with clunky heels followed. 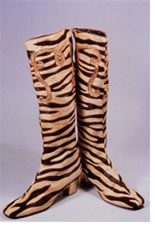 Boots hit the fashion world in mid-decade when Andre Courreges introduced flat, shiny white thigh boots with square toes, made from injection-moulded plastic. These boots set a new example, and were soon produced for Yves Saint Laurent in crocodile.

With the appearance of the mini-skirt, knee length boots appeared. As the sixties progressed, loose boots with a front seam gave way to boots that clung more tightly to the leg. Treated leathers and textiles began to take over from plain leather and plastic for these creations.

Go-go boots are one of the most remembered fashion trends of the 1960s. They came in a variety of heights from including ankle, thigh-high, and space age. They were a “must” in a young woman’s wardrobe.

In 1967, an ethnic look came in (brought on, no doubt, by hippie trend setting). Strappy African and oriental sandals were worn with flowing robes, afghan coats, and cheesecloth skirts and blouses. Pumps were abandoned in favour of more solid shoes, with broad square heels. By the end of the decade, soles had thickened, paving the way for the platform sole. In 1968, the new wave platforms reached ’s trend setting boutiques, and quickly became the height of fashion.

The shoes of this period vary greatly depending on which social group one focuses on. The hippies had their own version of fashion, which can best be described as anti-fashion. As fast as designers copied the styles, they had already changed. The fashion designers were not totally outflanked. With the more conservative groups haute couture was still appealing. The most copied shoe of the time was Roger Vivier’s pilgrim pump with silver buckles.

Men’s shoes offered an enormous variety of colours and styles during this decade. Though the conservative set stuck to oxfords, brogues and loafers, even the most conservative dress could include a pair of coloured suede shoes in a more conservative cut. The toe of the time was more rounded than in the fifties. In 1960, an interwoven leather upper was popular for the summer and casual slip- on shoes were worn. Late in the sixties, moccasins became popular, and they were most likely designer versions of the hippies’ style.

The younger generation wore the boot in the early sixties, popularised by the Beatles. This boot had a triangular elastic insert in both sides. Later, a boot with a side zipper and Cuban heel became popular. The cowboy boot also became popular, again following the trend the Beatles had set.

The footwear of the hippies who have come to characterise the entire decade cannot be defined in simple terms. They went barefoot, wore simple sandals and moccasins and shopped at underground vintage clothing stores. A hippie could be seen wearing anything, as long as it did not conform to the fashion trends of the day.

The History of Shoes: Superstition

Miners and fishermen are two occupations known to be very superstitious. Because they were at the mercy of the elements much store was placed on foreboding omens. fishermen have been known not to go to sea if the person brining their boots does so with them over their shoulders. Boots were always carried under the arm. Fishermen were aslo spooked if they saw a a flat foot print in the sand. miners would also avoid going to the pit if they woke up to find one boot had fallen over during the night.