The corrosion of steels is one of the major difficulties associated with the use of steel-framed structures. Corrosion occurs when steels react with nonmetallic elements of their environment. The chemical compounds formed, called corrosion products, are either oxides or salts, the nature of which has a considerable influence on the course of reaction, thus determining whether or not supplementary protection is required.

Most metals, if exposed to natural environment without protection, will form corrosion products typical of the ones from which they originally were extracted.

Metallic corrosion represents a tremendous annual loss. This loss includes the cost of preventive measures, such as the material and labor costs of painting, the additional cost of corrosion-resistant materials, as well as the cost of replacement of the corroded pieces.

The long term economy of a project demands that provisions be made to maintain the structure such that it can continue to serve its intended purpose.

Corrosion of steel is an electrochemical process, Figure 1. The mechanism is basically the same as in a simple battery: two metals, called the anode and the cathode, when immersed in a conductive solution (the electrolyte) will react so that the anode is dissolved and an electric current is generated.

Atmospheric corrosion of steel occurs when moisture acts as an electrolyte.

Anodes and cathodes are formed on a steel surface by slight changes in steel composition or variations in temperature or in environment.

Electrons are released from the anode and move through the metallic structure to the adjacent sites on the surface.

At the cathode the released electrons combine with oxygen and water to from hydroxyl ions.

The hydroxyl negative ions react with ferrous positive ions from the anode to produce ferrous hydroxide.

The ferrous hydroxide itself is further oxidized in air to form hydrated ferric oxide (rust).

The sum of these reactions can be described by the following equation: 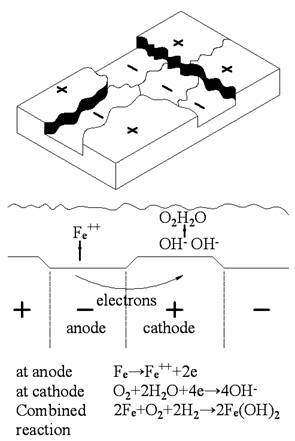 For steel to corrode it is necessary to have the simultaneous presence of water and oxygen;

Over long periods the loss of metal is reasonably uniform over the surface and this case is usually described as general corrosion.

Other forms of corrosion

In addition to general corrosion different types of localized corrosion can occur.

Pitting corrosion occurs when the attack on the original anodic area is not stifled and continues deep into the metal, forming a corrosion pit. Pitting occurs more frequently with mild steel immersed in water or buried in soil.

Crevice corrosion can develop when design details and weldings are present. The entrance to the crevice becomes cathodic and the tip of the welding becomes a localized anode while high corrosion rates occur at this point.

The rate of corrosion is mainly determined by the following principal factors:

Time of wetness, which is the proportion o total time during which the surface is wet due to rainfall, condensation, etc.

Sulphates, that originate from sulphur dioxide gas. This oxide reacts with water or moisture in the atmosphere to form sulphuric acid. Industrial environments are a prime source of sulphur dioxide.

Chlorides are mainly present in marine environments, with the highest concentrations in coastal regions.

Within a given local environment, corrosion rates can vary due to effects of prevailing winds or sheltering. Therefore the microclimate surrounding the structure (in the close proximity) which determines corrosion rates for practical purposes. Corrosion rates are usually expressed as μm/year.

Industrial atmospheric – inland, polluted environments; corrosion rates between 40 and 80 μm/year, depending on the level o sulphur dioxide (SO2)

Marine atmospheric – about 2 km strip around the coast, corrosion rates are between 50 and 100 μm/year depending largely on the proximity of sea.

Soils – the corrosion process is very complex and various methods are used to evaluate the corrosivity of soils. 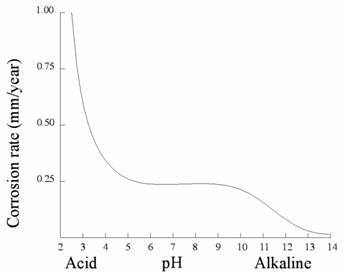 Long buried steel structures are most susceptible to corrosion. Steel piles driven into undisturbed soils are much less susceptible due to low availability of oxygen.

The structural engineer or architect has little opportunity to modify the environment by eliminating pollutants or oxygen from the atmosphere. The practical attack on corrosion is confined to reducing the time of wetness or stopping water from reaching the steel surface.

The prevention of corrosion should be taken into account during the design stage of a project. The main points that must be considered are:

Entrapment of moisture and dirt

provide adequate depth of cover and quality of concrete;

separate steel and timber by the use of coatings or sheet plastics;

provide vent-holes and drain-holes for items to be hot-dip galvanized;

provide lifting lugs and brackets where possible to reduce damage during handling and erection.

Corrosion control is normally achieved in one of two ways:

through painting of the structure in the shop and the field;

through the use of corrosion-resistant weathering steels.

Painting of structural steel is normally done in several stages, from the initial coats of primer that are applied in the fabricating shop, to the final application that is done in the field.

The cost of these operations can be substantial and it is therefore important to specify the proper types of paint and surface preparation methods.

It is reasonable to require corrosion protection for structural members that will be exposed to environmental conditions that have such effects.

For elements that are to be fully covered and kept within the protected atmosphere, of an office building, for example, corrosion protection in the form of paint or similar treatment should be waived.

Structural steels can be chemically modified so that it forms a protective surface layer which not only eliminates the need for  and cost of applied coatings, but which is also self-sealing if it is damaged. Normal rust layers are porous and allow water to pass through to continue to attack the underlaying steel surface.

The addition of small quantities (up to 3%) of certain elements (commonly Cu, Ni, and Cr) to steel modifies the structure of the rust layer that is formed. The alloying elements stimulate a denser rust film and also react chemically with sulphur in the atmosphere to form insoluble basic sulphate salts which block the pores in the rust films formed on these low-alloy steels. These mechanisms produce thin, tightly adherent and self-sealing rust films of such low permeability that the corrosion rate is reduced almost to zero (Fig.2). The high strength low-alloy steels have added cooper and nickel and achieve an atmospheric corrosion resistance 4 to 6 times that of carbon steel. The high initial cost of such metals can be more than compensated for by the increased service life and resulting lower annual replacement costs. More recently, highly corrosion-resistant steels without any protective coating have been manufactured. These are called weathering steels or self-painting steels. 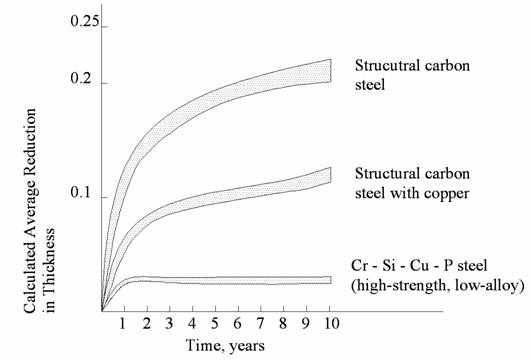 Figure 3. Comparative corrosion of steels in an industrial atmosphere 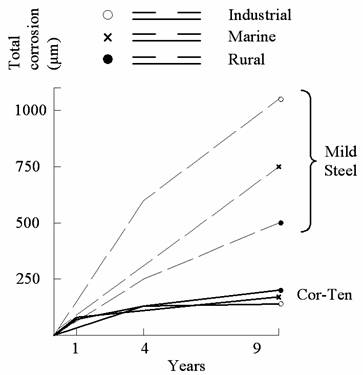