The F92 underground train for BVE4

The F92 underground train for BVE4

Having worked for a long time in silence, this underground train is my first sign of life again to bring some 'fresh air' into the BVE scene again.

So this train is indeed some kind of revolution:

As far as I know, this is the first train for BVE that makes such consequent use of the possibilities the OS_ATS plugin offers

More that 2500 lines of source code lead to the most realistic train simulation ever in BVE.

All 16 usable ATS-functions BVE offers have been used to make driving the train as accurate as possible. Furthermore, there are many other, non-usable functions for train systems and effects.

All this will be operated from the new hi-res panel with more than 80 different bitmaps, accompanied by the self-scripted sound system with more than 85 sounds, which recreates nearly every sound of the original train.

To have a go at all these new functions immediately, I have updated the Bentschen U1 line by Patrick Popiol to support the new features of my F92.

You'll find the route in the folder 'Bentschen', it's called

And now: Hop on and get going! But first you should print out the tutorial!

The functions of the F92

The F92 is equipped with the following functions:

An updated version of the Bentschen U1 by Patrick Popiol is included in the package.

The panel of the F92 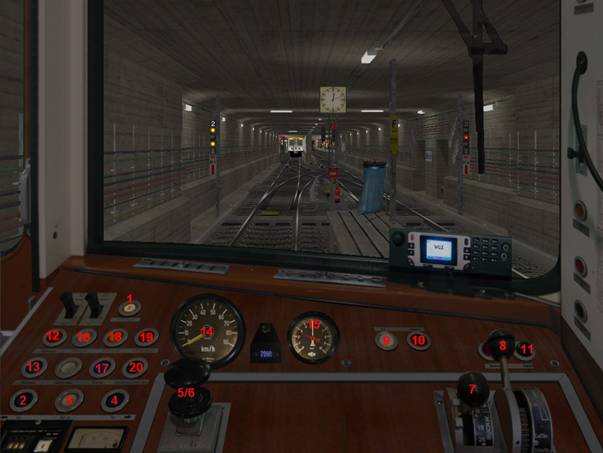 Description of the numbered parts (these have been transferred into BVE)

The pilot lamp lights up when the tripcock is turned on and goes out when the train passes a red signal or is caught by a speed-checker (GÜ).

This also happens, if you move the speed-selector into neutral above 7 km/h.

Below 7 km/h, you can turn on the tripcock again by pressing the button. Furthermore, you can pass a red or not working signal while holding down the button and not exceeding 7 km/h.

With this button, you can release the doors on the left side. When the doors are opened, the lamp is light green. If you press the button while driving, the doors will be preselected and the lamp is dark green. Below 7 km/h the doors can be opened by the passengers.

Attention: If you come to a stop outside a station having the doors preselected already, you'll have to press the door-closing button before the train stops.

Otherwise, the doors could be opened in the tunnel.

By pressing this button, the doors will be closed. The pilot lamp lights up as soon as all doors are closed.

Attention: The pilot lamp if off when the speed-selector is in neutral.

As long as you press this button, the train accelerates.

Attention: The train won't accelerate unless the doors are closed and the brake handle is in notch 'Fahren' (drive).

The SIFA (Sicherheitsfahrschalter / deadman handle) applies the brakes if the driver becomes unconscious for example.

This is why the SIFA has to be pressed all the time. It can only be released while standing in brake notch 'E4' and air brakes applied or when the speed selector is in neutral.

With the speed-selector, you can select the desired speed.

On 3-phase-units (like the F92) this speed is maintained automatically while the throttle button is pressed.

Notch 15 is a shunting notch and may only be used for a short time.

The brake handle has the following notches:

Fahren / drive slow release of air brake, train can only accerelare in this notch

Normally, the train is slowed down with the electric brake until it nearly comes to a stop. The electric brake cannot stop the train completely, so you have to apply the stopping brake by pressing the button on top of the brake handle in notch 'E4'.

The stopping brake releases 0.5 bar from the brake pipe so the train comes to a stop.

It can be applied at all speeds, but you should normally only use it below 10 km/h.

If you're using the air brake to slow down the train, please note the following:

This lamp lights up when the highest e-brake notch E4 is reached. Then you can apply the stopping brake

This lamp shows that the air brake is applied (below 4.5 bar brake pipe pressure). As long as this lamp lights up, the train cannot accelerate.

This button engaged the horn.

When this lamp lights up, the automat (driving motor safety device) is turned turned off in at least one unit of the train. (In BVE, you cannot switch it on again).

You can only use the air brake, furthermore, the train cannot accerelare that fast any longer.

This lamp shows if the automat of your unit is turned off.

Shows the speed in km/h

When the brake pipe pressure reaches 5 bar, the air brakes are released, maximum brake pressure is applied at 3 bar.

The needle of the filling pipe should always be at 5 bar.

This lamp is only of importance, when there is at least one DC-unit coupled in your train. It lights up on all driving notches where there are resistors in the circuit and goes out when the speed is above 25 km/h. When you release the throttle button, it also lights up for a few seconds.

This lamp lights up when the fans are not running although the speed selector is set to a km/h-notch.

This happens when you turn on the panel or drive through a long gap in the 3rd rail.

This lamp lights up when the spring loaded brake is applied in a unit of the trein.

With this button, the spring loaded brake can be applied.

This brake works by spring power on two axles of each car and is released by air pressure. It is used in first place to prevent a shut down train from rolling away, but it can also be used in critical situations to support the e-brake ('E5'). But this should be an exception.

When the spring loaded brake of your unit is applied, the red lamp lights up.

Further functions not shown in the picture:

When standing in a station, two messages can be broadcasted:

'Zug nach [Fahrtziel]Einsteigen bitte!' / Train to [destination]Please get on board

The station announcements between stations are played automatically.

If the maximum speed of the train (70 km/h) is exceeded, a bell rings. At the same time, the train is slowed down by the air brake. Below 70 km/h, the brakes can be released again.

At the lower screen border, there are three counters:

The tripcock counter 1 shows the number of unwanted emergency brakes.

The odometer shows the number of kilometers run ever since.

The train is delivered with all three counters set to zero.

Updating of existing routes for the F92

To be able to use all of the new functions, you'll need to make some additional entries in the route file.

The following beacons are used by the F92:

The beacon 23 has to be set before the station as well as at the exact stopping position.

Behind the station, a reset beacon must be placed, so that nobody wants to enter in the tunnel.

On startup, this beacon defines the doors on the given side to be already open.

With this beacon, you'll be able to take over the train with open doors. It has to be placed at the beginning of the route and to be reset behind the first stopping position by setting the last value to zero.

defines the number of passengers, who want to get on/off at the next station.

With .Beacon 25;0;0;21, there will be 21 passengers waiting for you at the next station. This beacon,too, must be reset behind the station.

With .Beacon 26;0;0;0, a speed-dependent rail joint sound will be played at this position.

defines the destination for the ELA broadcast 'Zug nach [destination]Einsteigen bitte'. With .Beacon 27;0;0;30, for example, you can set the sound to index 30 of the [ATS] sounds defined in the file sound.cfg. This file can be found in the train folder. The beacon has to be placed at the beginning of the route.

Attention: This sound can only be heard above 50 km/h.

Attention: This sound can only be heard above 25 km/h.

With .Beacon 30;0;0;0, the scratching sound of a 3rd rail beginning will be played at this place.

With .Beacon 30;0;0;0, a switch sound will be played. The last value defines the position of the switch: 0 for straight, 1 for diverging.

defines a signal magnet which has to be put behind the corresponding signal.

On signals without GÜ, the last value is to be set to zero.

The program, its parts and files included in the package (bitmaps, text files and most of the sounds) are © 2006 Rüdiger Hülsmann.

For decompiling and/or modifying of files as well as publishing them, my prior permission is required and/or the permission of the respective author.