Discus are sold under a confusing variety of names. What are the different types of discus and how do we tell them apart?

All colors and types of discus will interbreed and produce fertile fry. Some types like Pigeon Blood and Blue Diamonds are easily recognized.  In this article I want to show you how discus can be placed in different categories and illustrate the types of discus available to hobbyists today.


How are discus different from each other and how are they alike?  Discus are either classed as wilds, which means they were born in the Amazon region of , or as tank-bred domestics.  Next we look at the physical characteristics.  Underneath the color, underneath the pattern discus will either have or not have vertical bars. In a spawn of discus the vertical stress bars are the very first trait you are able to distinguish.  Several weeks latter pattern will begin to develop and finally the color will fill in.

Let’s start with wilds All wilds have vertical bars overlaid with varying amount of pattern or striations. Wilds are traditionally broken down into four classes. 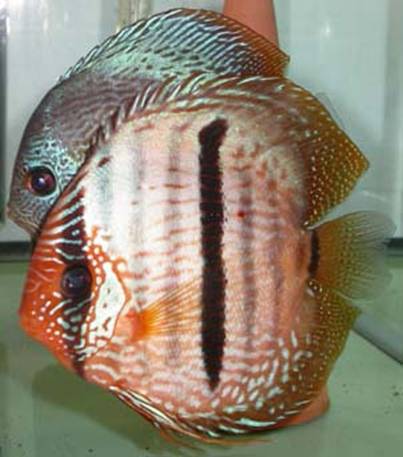 Heckles are different from other Discus in that three of the nine vertical bars are more prominent - the one through the eye, the fifth or middle bar and the caudal or tail bar. 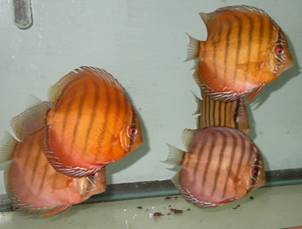 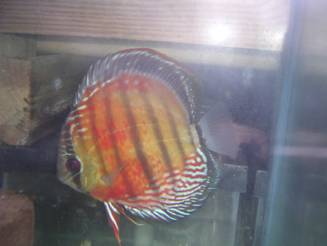 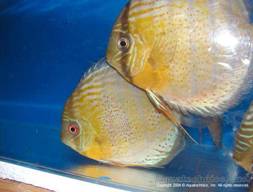 Wild Red Spotted Greens have a greenish-tan base color.  The red spots are highly prized. Collectors look for discus with spotting over a large percentage of the body.

Wild Red Spotted Green discus have been selectively bred with domestic strains to produce spotted fish like this one. 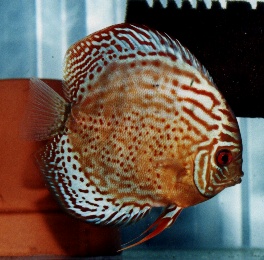 Domestic discus are classified by physical appearance such as color and markings. 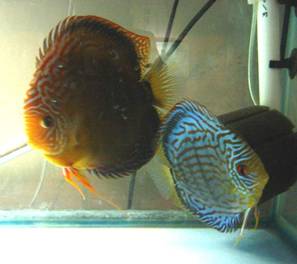 The first domestic discus were similar in appearance to wild discus. They had vertical stress bars with an

Striations can be classed as thick line or thin line. Turquoise Discus are one of many discus varieties with straight, thick striations. 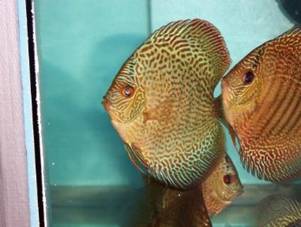 This class would include Discus with complicated striations such as this Ring Leopard.  Checkerboard and pearl are other common discus patterns 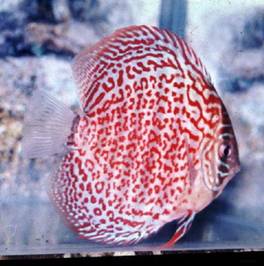 Discus with spots such as Red Leopards, domestic Red Spotted Greens and leopard spotted snakeskin would fit in this category. 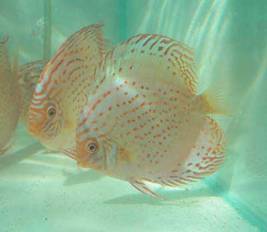 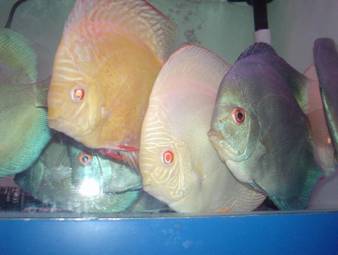 Another way to divide domestic discus is by color.  Discus are commonly divided into color classes at shows. 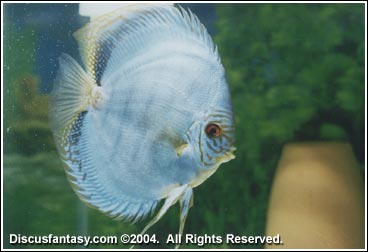 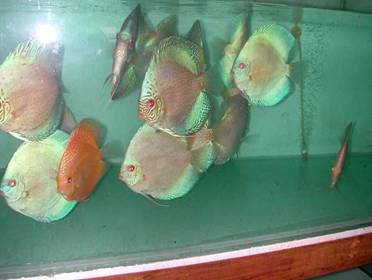 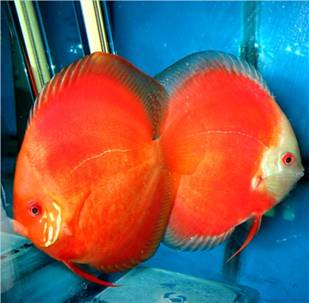 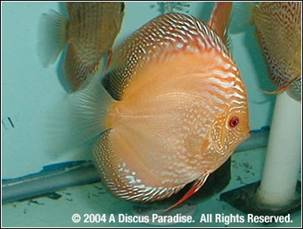 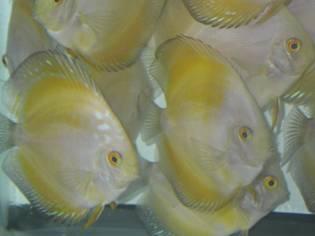 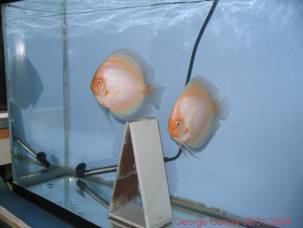 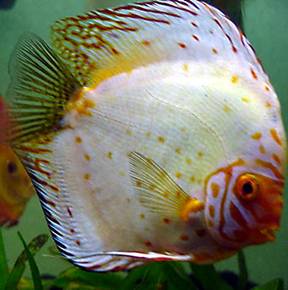 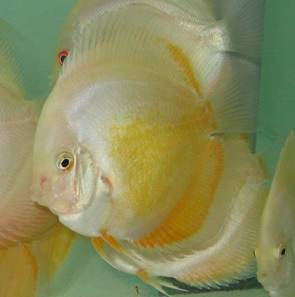 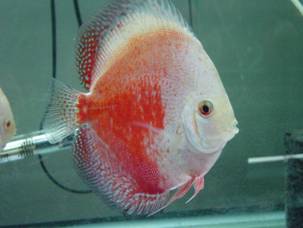 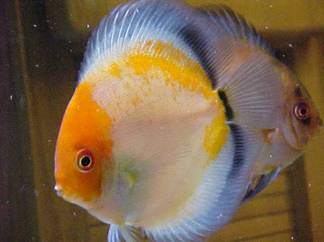 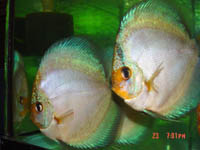 Since any discus can and will breed with any other discus it is sometimes hard to determine which class the resultant progeny belongs in.  At discus shows it is up to the owner to decide the class best suited for his entry.

The discus pictured below are easy to distinguish and are popular in the hobby. 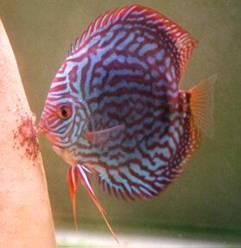 Turquoise Discus have vertical stress bars and a pattern of thick striations. The striations may be red or blue on a tan background. This is one of the oldest strains of domestic discus and can be found most anywhere discus are sold. 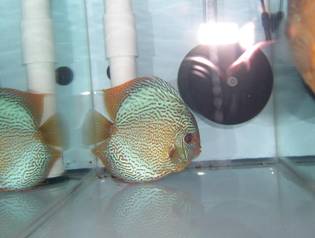 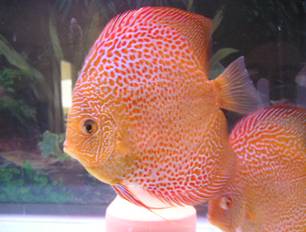 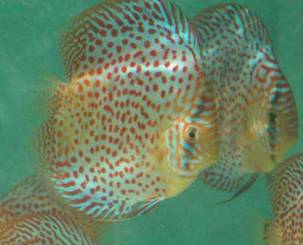 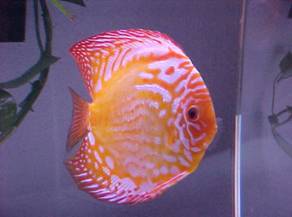 Pigeon bloods lack vertical stress bars and range in color from nearly solid white through yellow, orange, to a deep orangey red.  They can be almost solid in color, striated with thick lines, thin lines, pearled or anything in between.  Many are being bred with an overlay of red spots on the body.  Pepper is a characteristic shared by all pigeon based discus.  These small, black specks of pigment usually appear on the nose and face and are more prominent when the discus is stressed or ill.  The newer strains of pigeons are being bred with less pepper. The pigeon blood gene is dominant.  A Pure pigeon bred to any other discus will produce all pigeon fry. If the breeding is to a discus with vertical stress bars the fry may be heavily peppered.  Pigeon based discus are sold under many names such as Marlboro, Melon, Tangerine, White Butterfly, Blue Panda and Golden.

Blue Diamonds lack vertical stress bars and are solid blue in color.  There should be no striations on the face or fins. Red eyes are desirable. The Blue Diamond gene is recessive. Two blue diamonds bred together will produce all blue diamond fry. 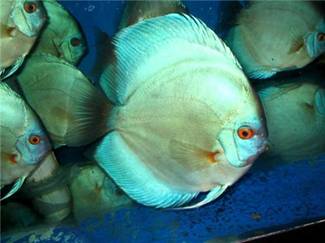 White Discus such as Snow Whites lack vertical stress bars and are solid white in color. The face may be more yellowish-white and the fins may show iridescent blue. There should be no striations on the face or fins. They have distinctive white eyes. 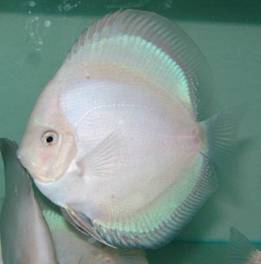 There are no hard and fast rules on classification. Many of the newer colors have been around less than 10 years and are not fixed.  The buying public is fickle, tiring of the colors they already have and always on the look out for something new.  Breeders are still experimenting with all manner of crosses in hopes of creating the next new color or pattern.  Look at all that’s been accomplished in the last few years.

1993---14 bar snakeskin discovered in Penang is thought to have inherited the characteristic from wild discus.

The above timeline is from an article by Joe Szelesi posted on the Brooklyn Aquarium Society website.  Here is a link to the full article. https://www.brooklynaquariumsociety.org/Articles/2002-sept-pg%2029.htm 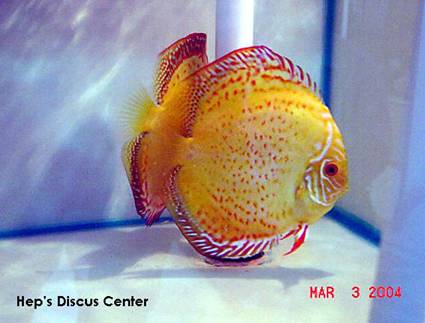 Discus Names can be confusing. It’s not always easy to guess the genetic make-up of a particular discus by it’s name or by looking at it.  Briefly here are common characteristics that can help you determine the background of your discus.

Snake Skins are one of the most popular crosses right now.  Look for thin lines (striations) with a distinctive pattern of fine lines and dots on the gill plates. Many will have 14 vertical stress bars. Eyes are red or amber.

Ghosts do not have vertical stress bars on the body, but may have partial bars on the eye and tail, will have predominately white eyes (may have some red pigment) with black pupils.

White based discus have no vertical stress bars, will have dominant white eyes (may have some red pigment) with black pupils.

Albino Discus lack pigment, so they will not exhibit vertical stress bars and will have pink eyes.

Pigeon Bloods do not have solid vertical stress bars, can be just about any pattern or color (usually orange) and have fine black speckles called pepper on the face and elsewhere. Eyes will be amber or red. They are dominant and first generation crosses will all look like pigeons.

Blue Diamonds do not have vertical stress bars and no pattern on the fins or face. Eyes will be amber or red. Two Blue Diamonds will produce all Blue Diamond fry. 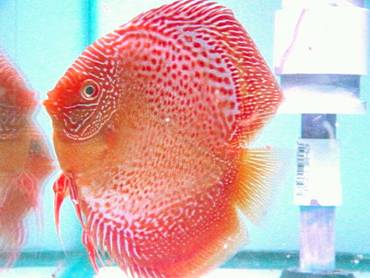