From Wikipedia, the free encyclopedia

Mary-Kate Olsen and Ashley Fuller Olsen (born June 13, 1986) are American actresses, best known for playing the role of Michelle Tanner on the sitcom Full House. Both have appeared in television and films since infancy. Since then, they have continued their celebrity through numerous television programs, films, interviews, as well as commercial endorsements. 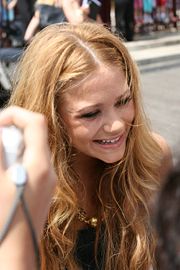 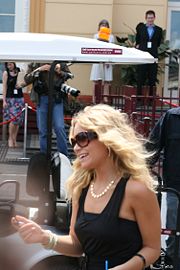 The girls were born in Sherman Oaks, to David Olsen (b. 1953) and Jarnette (Jarnie) Fuller (b. 1954) in 1986. Mary-Kate and Ashley Fuller Olsen started their acting careers on the television series Full House in 1987. They were hired at the age of six months and filming began when they were nine months old. The show was widely popular during the late 1980s and early 1990s. Both sisters played the same character, Michelle Tanner, taking turns during the tapings to do so, in order to comply with strict child labor laws regarding child actors. For the first year, Ashley would cry when she was brought on set to do a scene, so Mary-Kate had more screen time in the first season.

Because the producers did not want viewers to know that Michelle was played by twins, the sisters were originally credited as 'Mary Kate Ashley Olsen', but in the last season and most of season one, they were credited as separate people. During the eight year run, Mary-Kate and Ashley made several straight-to-video movies, in addition to Full House, such as To Grandmother's House We Go (1992).

Shortly after the end of Full House, they began heavily merchandising their image. They established a company called Dualstar in 1993 and their brand has been sold in more than 3,000 stores in and over 5,300 stores worldwide 1] Because of this, they have been on the Forbes' 'The Celebrity 100 list' since 2002, and in 2007, Forbes ranked them, collectively, as the eleventh-richest women in entertainment, with an estimated net worth of $100 million.[2]

Mary-Kate and Ashley were popular figures in the preteen market during the late '90s and early 2000s. Their names became a cottage industry, with their likeness seen in clothes, books, fragrances, magazines, movies and posters. There were even Mary-Kate and Ashley fashion dolls made by Mattel from 2000 – 2005.

They starred in the video series The Adventures of Mary-Kate & Ashley and You're Invited To Mary-Kate and Ashley's, the ABC show Two of a Kind, and ABC Family's So Little Time. However, So Little Time was panned by critics and disappointed fans. Despite this, they were ranked number three on the VH1 program 100 Greatest Child Stars

Their most recent theatrical venture was in the light-hearted romantic comedy, New York Minute, also starring Eugene Levy. The film was expected to launch the girls into more serious adult roles, but was a box office flop.

Mary-Kate's first acting appearance without Ashley was in the movie Factory Girl, released in December 2006. Mary-Kate was originally in several scenes, but only appeared in the background in the finished film. Mary-Kate has also a recurring guest role in the third season of the Showtime series Weeds 3], and she is also in the 2008 independent film The Wackness starring Ben Kingsley, with whom she shares a passionate kiss.[4]

As the sisters have matured, there has been greater interest in their fashion choices, with the New York Times declaring Mary-Kate a fashion icon for pioneering her signature (and now popular among celebrities and fans alike) 'homeless' look 5] The style, sometimes referred to as 'ashcan' or 'Boho-chic' or bohemian-bourgeois,[6], is similar to that of Bohemian chic popularised in Britain by Kate Moss and Sienna Miller. The look consists of oversized sunglasses, boots, loose sweaters, and flowing skirts all with an aesthetic of mixing high end pieces with low end.[6] Their fashion choices, however, haven't been without controversy. Ashley Olsen was included on PETA's 2006 Worst Dressed list for wearing fur.

Mary-Kate and Ashley have a clothing line in Wal-Mart stores across for girls ages 4 – 14 as well as a beauty line called 'Mary-Kate and Ashley: Real fashion for real girls'. In 2004 they made news by signing a pledge to allow all the workers that sew their line of clothing in full maternity leave. The National Labor Committee, which organized the pledge, later praised the twins for their commitment to worker rights. The director of the organization, Charles Kernaghan, is quoted as saying, 'The Olsen twins have done the right thing. Now it is up to Wal-Mart to either support Mary-Kate and Ashley’s commitment to women’s rights, or tragically to shut them down.'[7]

They were tapped as the faces of upscale fashion line Badgley Mischka in 2006, in an attempt to gain credibility in the fashion industry after their association with Wal-Mart 8] They have also launched their own new couture fashion label 'The Row' named after the famous Savile Row of . The pair have also started a new line for The Row, entitled 'Elizabeth & James', named after their siblings 9]

Mary-Kate and Ashley have been criticized by animal rights group PETA for their use of fur in their fashion line, The Row. PETA's youth group, PETA2, set up a website[1] in December 2007 in which they refer to them as the Trollson Twins, Hairy-Kate and Trashley.

Mary-Kate and Ashley have an older brother, Trent, and younger sister, Elizabeth, as well as two half-siblings, Taylor (b. 1996), and Jake (b. 1997). The twins' parents divorced in 1995. Taylor and Jake are the children from their father's second marriage, to Martha Mackenzie-Olsen.

Mary-Kate and Ashley announced in 2004 that they would be attending college at after graduating high school. Most child and teenage actors usually choose to pursue acting full time after graduating from high school, with few, such as Brooke Shields, Jodie Foster, Julia Stiles, and Natalie Portman, choosing to further their education. In 2005, Mary-Kate moved back to . She decided to stay on the West Coast and pursue more individualized work with their company, Dualstar. Ashley, still in , remains in close contact with her sister.

In 2004, Mary-Kate checked into rehab in for six weeks because she was suffering from the eating disorder anorexia nervosa. It was rumored that there was also a drug problem, but the Olsens' publicist said, 'Mary-Kate was not admitted for drugs. Period.'[10] Mary-Kate put on about five to seven pounds immediately after her stint in rehab and pictures had shown that she may have gained more weight. However, Star magazine has, as of January 2007, released a cover story article on Mary Kate's, once again, very low weight. They claim she is at 80 pounds. She has been seen wearing baggy clothes and carrying vast purses. Her spokesperson has denied the weight loss claiming 'Mary-Kate has not lost weight. She is taking good care of herself.'[11]

In 2005, Mary-Kate ended her romance with Greek shipping heir Stavros Niarchos III. Niarchos then began dating hotel heiress and socialite Paris Hilton. Mary-Kate said that the breakup was one of the main factors in her leave of absence from . 'I miss him and I love him,' Mary-Kate said, 'It's a hurtful and a painful subject.' When asked if there was a specific reason for her leaving NYU, she replied, 'I think we can all guess.'[12] The breakup and Niarchos's pairing with Paris Hilton led to a rift between Hilton and Mary-Kate. '[Paris and I] always only had nice things to say about each other,' Olsen said. 'Now I guess you can tell we're not talking.'[12]

In 2006, Ashley filed a $40 million lawsuit against tabloid magazine National Enquirer for printing a headline reading 'Ashley Olsen Caught In Drug Scandal,' with a story accompanied by an unflattering photo of Ashley with her eyes half-closed. The lawsuit stated that the photo was clearly used to create a misrepresentation of Olsen under the influence of drugs. Ashley completely denies the accusations and said that she has not and does not use or sell illegal drugs. The suit consisted of $20 million in libel damages and $20 million in false light invasion of privacy damages. Per her suit, Ashley Olsen and her lawyers believe that 'freedom of the press is a valuable right, but it is not a license for gossipy tabloids to tar and feather innocent celebrities and destroy their reputations and businesses for the rag's profits.'[13]

In 2008, Mary-Kate Olsen was caught up in the media-hype surrounding the death of Heath Ledger after Masseuse Diane Lee Wolozin, who had gone to the flat to give Ledger a 3pm massage and found his naked body in his bed, rang the 21-year-old Olsen twice before calling the 911 emergency service. There is also speculation that Olsen was having a relationship with Ledger at the time of his death 14] Olsen released a statement though her publicist stating 'Heath was a friend. His death is a tragic loss. My thoughts are with his family.'[15]

This section lists the filmography of the twins as a duo. See Mary-Kate Olsen and Ashley Olsen for other productions in which each has appeared.