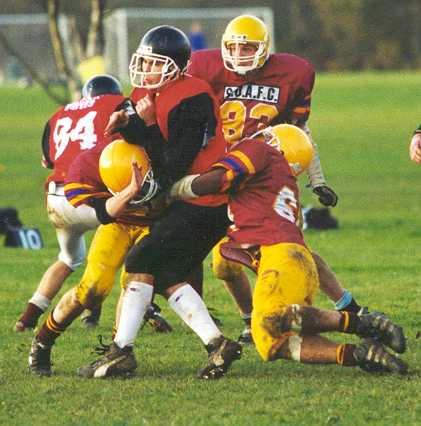 Football, American, distinct type of football that developed in the United States in the 19th century from soccer (association football) and rugby football. Played by professionals and amateurs (generally male college or high school teams), football is one of the most popular American sports, attracting thousands of participants and millions of spectators annually. The forerunner of American football may have been a game played by the ancient Greeks, called harpaston. In this game there was no limit to the number of players. The object was to move a ball across a goal line by kicking, throwing, or running with it. Classical literature contains detailed accounts of the game, including its rougher elements, such as ferocious tackling. Most modern versions of football, however, originated in England, where a form of the game was known in the 12th century. In subsequent centuries football became so popular that various English monarchs, including Edward II and Henry VI, forbade the game because it took interest away from the military sport of archery. By the middle of the 19th century football had split into two distinct entities. Still popular today, these two sports included the football association game, or soccer, and rugby, in which players ran with the ball and tackled. Modern football evolved out of these two sports.


The football playing field is rectangular in shape, measuring 100 yd (91.4 m) long and 53.5 yd (48.9 m) wide. At both ends of the 100-yard dimension, white lines called goal lines mark off the entrances to the end zones. Each team defends one end zone. A team must carry, pass, or kick the ball into the 10-yd (9-m) end zone on the opponents' half of the field to score. Lines parallel to the end zones cross the field at 5-yd (4.5-m) intervals. These lines give the field a resemblance to a large gridiron. Another set of lines, known as the sidelines, runs along both sides of the field. In addition, two rows of lines, called hash marks, run parallel to the sidelines. The hash marks are 53 ft 4 in (16.3 m) from each sideline in college and high school football, and 70 ft 9 in (21.6 m) from each sideline in the National Football League(NFL). A game of football is divided into four periods, known as quarters, each consisting of 15 minutes of playing time. The first two periods constitute the first half; the second two comprise the second half. Between the halves, a rest period, usually lasting about 15 minutes, is permitted the players, who may leave the field. The teams change halves of the field at the end of each quarter. The clocks stop at the end of each quarter and at certain other times, when particular events occur or when designated by the officials. 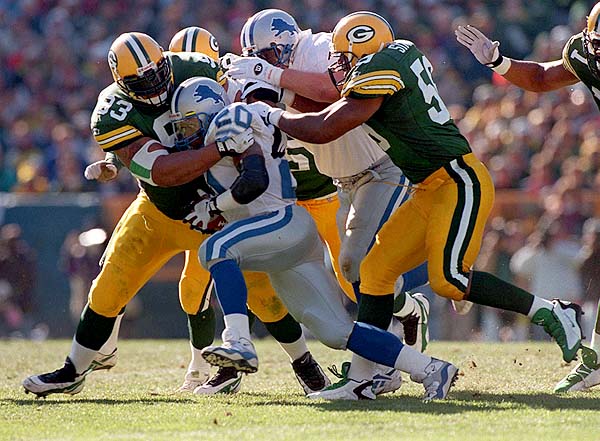 Football is played by two opposing teams, each fielding 11 players. Each team tries to move the ball down the field to score in the end zone defended by its opponents. During a football game the teams are designated as the offensive team (the team in possession of the ball) and the defensive team (the team defending a goal line against the offensive team). Players involved in kicking situations are known as the special teams. The 11 players of the offensive team are divided into two groups. To protect themselves from the often violent bodily contact that characterizes football, players wear elaborate equipment, including lightweight plasticized padding covering the thighs, hips, shoulders, knees, and often the forearms and hands. Players also wear plastic helmets with guards that cover most of the face.

American football was made popular by teams representing colleges and universities. These teams dominated the game for most of the first 100 years of football in the United States The Super Bowl is the final contest of the professional season and determines the league's annual champion. Currently the Super Bowl routinely finishes among the all-time top 50 programs in television ratings, and the 1994 game reached an estimated 750 million viewers around the world. Now probably the most important single-day sporting event in the United States, the Super Bowl had more modest beginnings. In 1967 the champions of the American Football League and the NFL met in what was called the AFL-NFL World Championship Game. The name was later shortened to Super Bowl, named after a child's toy, the Super Ball. In this first game, the Green Bay Packers beat the Kansas City Chiefs, 35-10. The Los Angeles Coliseum, site of the game, fell far short of a sellout, although tickets were only $10 each. In comparison, the highest ticket price at the 1994 Super Bowl reached $250, with scalpers illegally charging more than twice that much.