Commonly known as Dracula 's Castle, the was originally a stronghold built by the Knights of Teutonic Order in 1212. The first documentary attestation of the is the act issued on November 19, 1377, giving the Saxons of Kronstadt () the privilage to build the Citadel. The building started in 1378 as a defense against Turks and later became a customs post on the pass between Transylvania and . From 1920 the castle became a royal residence until the expulsion of the royal family in 1948. Today it functions as a very attractive museum of medieval arts.


Situated only 28km southwest of , the is one of the most popular tourist site in . The castle is perched atop a 60m peak in the centre of Bran village. The Bran mountain pass was the main route into Wallachia from .

is famous for its association with the Dracula legend. The 15th-century Wallachian prince upon whom the novelist Bram Stroker is (incorrectly) supposed to have  his blood thirsty vampire connected to the .  In truth, Dracula may have attacked and briefly captured the castle in 1460, during one of his raids on the . 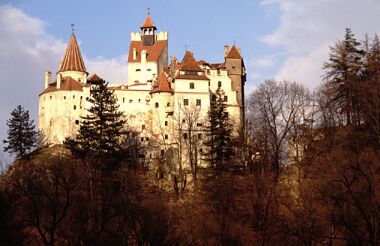