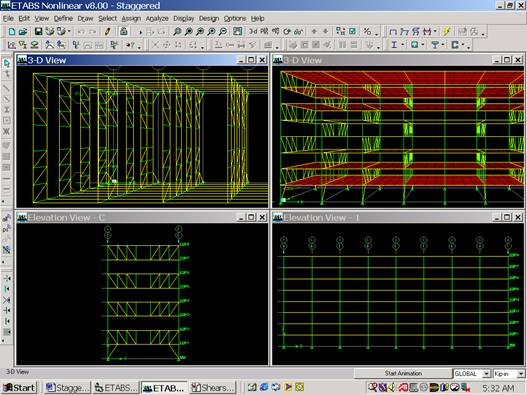 There are various ways in which you, the design engineer, can use ETABS to model staggered truss systems. The options allow you the latitude to apply your own ways of creativity and engineering. The numerical power and options that ETABS offers makes it possible to model important aspects of the Staggered Truss System in one consistent three-dimensional model. New innovations allow you to create complex models and capture all the important aspects of the structural behavior of the system very efficiently. 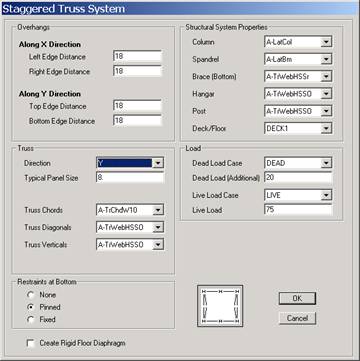 You can model the structure as a simple two-dimensional frame or a complete three-dimensional system. The two-dimensional system will consist of a typical multistory Staggered Truss and can be drawn very easily in a 2-D Elevation using the drafting tools provided in ETABS. A three-dimensional staggered truss system can be created instantaneously using the special template that is provided for such systems in the ETABS template library. You can then, using the template model as a base, incorporate any special conditions or complexities associated with your particular building. ETABS is equipped with very powerful editing options and drawing controls. The editing options allow onscreen operations including object modification, replication, mirroring, trimming, aligning, extending among others. The drawing controls allow precise creation and positioning of structural elements.

You can also replicate your 2-D model into the third dimension and connect the frames together with spandrels to create a 3-D model very efficiently.

While using ETABS you can use any set of units and the units can be dynamically changed at any stage of any session. It should be noted however that design codes are usually based on one specific set of units

Special auto-section properties for staggered truss systems have been built into ETABS for the chord and web members based upon the AISC Section Data Base.

The ETABS model is based on a physical member concept. For instance, the top chord of a staggered truss is created as one contiguous member without any concern about breaking up the member into segments to create elements to allow connectivity to the diagonal and vertical members at the panel points. You are creating the physical structural members not the analytical element model. The analytical model is created at analysis time using the points of intersections defined by the geometry of the physical model. At output time the information from the analysis elements is reassembled to produce force and moment diagrams and design information for the original physical member.

Similarly, in the modeling of the flexibility of a floor plate, you will typically create only one large floor object that represents a floor plank or the whole floor deck. The finite element model is automatically created at analysis time, based upon the physical geometry of the floor framing members and some user-defined properties associated with the floor object.

ETABS offers you a wide variety of options for modeling various types of floor systems. With ETABS you can model floor diaphragms as rigid or flexible (semi-rigid).

In the case of rigid floor diaphragms model each floor plate is assumed to translate in plan and rotate about a vertical axis as a rigid body, the basic assumption being that there are no in-plane deformations in the floor plate. The disadvantage of such an assumption is that the solution will not produce any information on the diaphragm shear stresses or recover any axial forces in horizontal members that lie in the plane of the floors.

The concept of rigid floor diaphragms for building type structures was introduced nearly 40 years ago as a means to lend efficiency to the solution process. See Reference [2]. And proved to be very effective, especially for methods associated with structural dynamics. However, as mentioned above it had serious limitations with braced frame structures and buildings with diaphragm flexibility issues. With the recent advances in numerical methods and personal computer technology the reasons that justified the use of rigid floor diaphragm models may no longer be valid.

The floor system supported by the staggered truss is usually made of pre-cast concrete hollow-core planks connected with shear connectors and then grouted, with or without a concrete topping. Other options include concrete supported on metal deck with steel beams or joists.

Under the influence of lateral loads the staggered truss geometry causes transfer of lateral shears that can generate significant shear stresses through the floor system. These stresses need to be evaluated. Therefore, it is important that the staggered truss floor system be modeled as a flexible (semi-rigid) diaphragm so that the diaphragm deformations get included in the analysis. These deformations are important not only for the evaluation of the diaphragm shear stresses but also for the recovery of the axial forces in the chords of the trusses and inclusion of the effects these deformations have on the forces of the web members.

The Physical Member Concept allows the automatic modeling of flexible floor diaphragms, each floor plank essentially being a floor object. Opening objects can be placed over floor objects to punch holes in the floor system. The meshing of the floor and opening objects for the creation of the finite element model is automatic. For diaphragm deformation effects to be accurately captured the mesh need not be too refined. 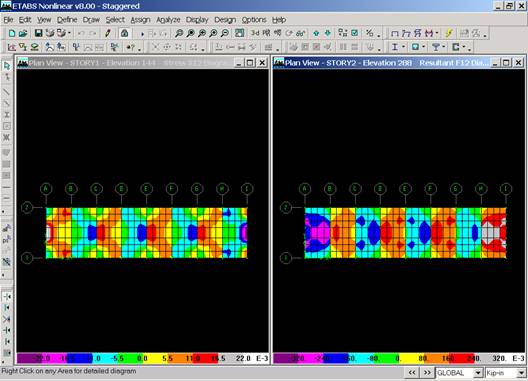 Current numerical techniques allow you to specify modification factors to stiffness components of the finite elements that are created that will limit the way in which the elements behave. Firstly the elements can be forced to act only in shear so that all in plane bending in the concrete due to lateral loading is resisted by a C and T couple causing axial forces in the longitudinal spandrel beams, with no action being taken by the concrete. Secondly, the in-plane behavior of the concrete will not contribute any strength or stiffness in the vertical direction of the trusses.

The Vertical loads are applied as uniformly distributed loads to the floor plates. These loads can be separated as dead load, live load or superimposed dead load. The self-weight of the deck and members can be automatically included in the dead load. The floor objects for the floor planks or the steel decking are given a spanning direction for automatic load transfer to supporting elements. Live Load Reduction Factors are calculated for each member based upon the tributary area that is being carried by the corresponding member. Various code dependent formulations are available for these calculations, however the values can always be overridden with user specified values.

The Lateral loads can be in the form of wind loads or seismic loads. The loads are automatically calculated from the dimensions and properties of the structure based upon built-in options for a wide variety of building codes.

The seismic loads are calculated from the story mass distribution over the structure using code dependent coefficients and fundamental periods of vibration. For flexible floor systems, where there are numerous mass points, ETABS has a special load dependent Ritz vector algorithm for fast automatic calculation of the predominant time-periods. The seismic loads are applied at the locations where the inertia forces are generated and do not have to be only at story levels. Additionally, for flexible floor systems the inertia loads are spatially distributed across the horizontal extent of the floor in proportion to the mass distribution, thereby accurately capturing the shear forces generated across the floor diaphragms.

ETABS also has a very wide variety of Dynamic Analysis options, varying from basic Response Spectrum Analysis to Large Deformation Nonlinear Time History Analysis. Code dependent response spectrum curves are built into the system and transitioning to a dynamic analysis is literally a few mouse clicks away once the basic model is created.

You can generate displays of energy diagrams that demonstrate the distribution of energy per unit volume across the structure. These displays help in identifying the members that contribute the largest to drift resistance under the influence of lateral loads. For drift control, increasing the sizes of these members will produce the most efficient use of the added material.

Along the same lines, you can activate an automatic member size optimization process for lateral drift control based upon lateral drift targets that you specify for any series of points at various floors. The drift optimization is based upon the abovementioned energy method, whereby extra material for drift control is distributed to members in proportion to their energy per unit volume for the particular lateral load case. 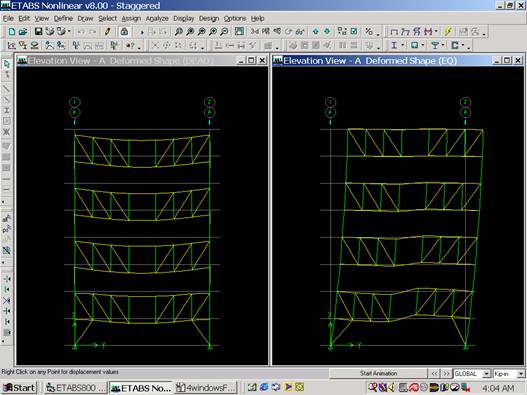 In many cases the analytical results of the final structure can be significantly affected by the construction sequence of the structure and the manner in which the structure is built and activated and the incremental dead load gets applied and pre-stresses the partially built structure.

Situations that are sensitive to the effects of the construction sequence include, among others, buildings with differential axial deformations, transfer girders involving temporary shoring and trussed structures where segments of the truss are built and loaded while other segments are still being installed. Staggered truss systems may be susceptible to these effects.

ETABS has an option whereby you can activate an automatic incremental story-by-story construction sequence loading of the building for a particular load case. This procedure will load the structure as it is built. Typically you would to this for the dead load case and use the analytical results from the sequence loading to be combined with the other load cases for the design and stress check of the building.

Dating back over 30 years, with the original development of TABS, the predecessor of ETABS, it was clearly recognized that buildings constituted a very special class of structures. See Reference [2]. It has been demonstrated that recognition of the special characteristics of numerical problems associated with building type structures can produce numerical procedures that are very efficient and stable. Also, information received and produced by such special purpose software will be in a form that targets the special requirements of the Structural Engineer involved in the design of buildings.

Today ETABS, continuing in the same tradition, has evolved into a completely Integrated System for the Analysis and Design of Buildings Structures. Embedded beneath the simple, intuitive user interface are very powerful numerical methods, design procedures and international design codes that allow you to be versatile and productive, whether you are designing a simple 2-dimensional frame or performing a dynamic analysis of a complex high-rise that is applying non-linear dampers for inter-story drift control.

ETABS works off of an integrated database. The basic concept is that you create only one model consisting of the floor systems and the vertical and lateral framing systems to analyze and design the whole building. Everything you need is integrated into one versatile analysis and design system with one user interface. No external modules to maintain and no worries of data transfer between modules. The effects on one part of the structure due to changes in another part are instantaneous and automatic.

Vertical Dynamic Analysis options allow you to include the effects of vertical ground motion components in your earthquake analysis. It also allows you to perform detailed evaluations of vertical floor vibration problems in addition to the traditional empirical methods that are also built into the software.

Special problems associated with building type structures, such as, Calculation of Centers of Rigidity, Global and Local P-Delta Effects, Inclusion of Joint Panel Zone Deformations, Effects of Joint Rigid Zone Ends and Member End Offsets due to Cardinal Points of a section have been addressed with customized numerical techniques that allow you to include these effects into your analysis effortlessly.

A wide variety of export options allow you to transfer information from the ETABS database for use with other software packages. Some uses of these export options, among others, are framing plans and elevations using AutoCAD, foundation and slab analysis using SAFE and information for detailing packages using CIS/2.

Structural Analysis of Multistory Buildings, Journal of the Structural Division, ASCE, Vol. 89, No. 8, 1963.