If you're serious about your car's handling performance, you will first be looking at lowering the suspension. In most cases, unless you're a complete petrolhead, this will be more than adequate. However, if you are a keen driver, you will be able to get far better handling out of your car by fitting a couple of other accessories to it. The first thing you should look at is a strut brace. When you corner, the whole car's chassis is twisting slightly. In the front (and perhaps at the back, but not so often) the suspension pillars will be moving relative to each other because there's no physical link between them. A strut brace bolts across the top of the engine to the tops of the two suspension posts and makes that physical contact. The result is that the whole front suspension setup becomes a lot more rigid and there will be virtually no movement relative to each side. In effect, you're adding the fourth side to the open box created by the subframe and the two suspension pillars.

No, these aren't the things that are bolted inside the car in case you turn it over - those are rollover cages. Anti-roll bars do precisely what their name implies - they combat the roll of a car on it's suspension as it corners. They're also known as sway-bars or anti-sway-bars. Almost all cars have them fitted as standard, and if you're a boy-racer, all have scope for improvement. From the factory they are biased towards ride comfort. Stiffer aftermarket items will increase the roadholding but you'll get reduced comfort because of it. Fiddling with your roll stiffness distribution can make a car uncomfortable to ride in and extremely hard to handle if you get it wrong. The anti-roll bar is usually connected to the front, lower edge of the bottom suspension joint. It passes through two pivot points under the chassis, usually on the subframe and is attached to the same point on the opposite suspension setup. Effectively, it joins the bottom of the suspension parts together. When you head into a corner, the car begins to roll out of the corner. For example, if you're cornering to the left, the car body rolls to the right. In doing this, it's compressing the suspension on the right hand side. With a good anti-roll bar, as the lower part of the suspension moves upward relative to the car chassis, it transfers some of that movement to the same component on the other side. In effect, it tries to lift the left suspension component by the same amount. Because this isn't physically possible, the left suspension effectively becomes a fixed point and the anti-roll bar twists along its length because the other end is effectively anchored in place. It's this twisting that provides the resistance to the suspension movement suspension movement. 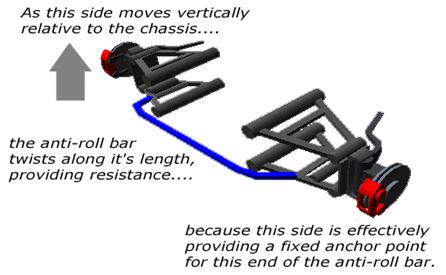 If you're loaded, you can buy cars with active anti-roll technology now. These sense the roll of the car into a corner and deflate the relevant suspension leg accordingly by pumping fluid in and out of the shock absorber. It's a high-tech, super expensive version of the good old mechanical anti-roll bar. You can buy anti-roll bars as an aftermarket addon. They're relatively easy to fit because most cars have anti-roll bars already. Take the old one off and fit the new one. In the case of rear suspension, the fittings will probably already be there even if the anti-roll bar isn't.

Typical anti-roll bar (swaybar) kits include the uprated bar, a set of new mounting clamps with polyurethane bushes, rose joints for the ends which connect to the suspension components, and all the bolts etc that will be needed.

These are the rubber grommets which separate most of the parts of your suspension from each other. They're used at the link of an A-Arm with the subframe. They're used on anti-roll bar links and mountings. They're used all over the place, and from the factory, I can almost guarantee they're made of rubber. Rubber doesn't last. It perishes in the cold and splits in the heat. Perished, split rubber was what brought the Challenger space shuttle down. This is one of those little parts which hardly anyone pays any attention to, but it's vitally important for your car's handling, as well as your own safety, that these little things are in good condition. My advice? Replace them with polyurethane or polygraphite bushes - they are hard-wearing and last a heck of a lot longer. And, if you're into presenting your car at shows, they look better than the naff little black rubber jobs. Like all suspension-related items though, bushes are a tradeoff between performance and comfort. The harder the bush compound, the less comfort in the cabin. You pays your money and makes your choice.

These are the things to go for when you upgrade your springs. In actual fact, it's difficult not to get progressive springs when you upgrade - most of the aftermarket manufacturers make them like this. Most factory-fit car springs are normally wound. That is to say that their coil pitch stays the same all the way up the spring. If you get progressively wound springs, the coil pitch gets tighter the closer to the top of the spring you get. This has the effect of giving the spring increasing resistance, the more it is compressed.
The spring constant (stiffness) of a coil spring equals:
k = compression / force = D^4 * G / (64*N*R^3)
where D is the wire diameter, G an elastic material property, N the number of coils in the spring, and R the radius of the spring.
So increasing the number of coils decreases the stiffness of the spring. Thus, a progressive spring is progressive because the two parts are compressed equally until the tightly wound part locks up, effectively shortening the spring and reducing its compliance.
So for normal driving, you'll be using mostly the upper 3 or 4 'tight' winds to soak up the average bumps and potholes. When you get into harder driving, like cornering at speed for example, because the springs are being compressed more, they resist more. The effect is to reduce the suspension travel at the top end resulting in less body roll, and better roadholding. Invariably, the fact that the springs are progressively wound is what accounts for the lowering factor. The springs aren't made shorter - they're just wound differently. Of course the material that aftermarket springs are made of is usually a higher grade than factory spec simply because it's going to be expected to handle more loads.
Note:Make sure you get powder-coated springs! This means they've been treated with a good anti-corrosion system and then covered in powdered paint. The whole lot is then baked to make the paint seal and stick and bring out it's polyurethane elastic properties. It's the best type. If you just get normally painted springs, the paint will start to flake on the first bump, and surface rust will appear within days of the first sign of dampness. Not good.

What if I get shorter springs to lower the car? Will I need to adjust my caster and camber angles and/or my shock absorbers?

Generally the answer would be no. Most cars have a good 10-13cm (4-5 inches) movement in their suspension from the factory. As most of the lowering springs you can buy only lower by 2-7cm (1-3 inches), your suspension should still be well within it's designed operating limits. Therefore, caster and camber angles shouldn't need looking at.

What if I get shorter springs to lower the car? Will my tyres rub on my arches?

They shouldn't unless you start messing about with wheel and tyre sizes. Again, given that most suspension kits lower within the car's normal operating limits, there shouldn't be a problem. If there was, then every time you went over a big hump with standard suspension, the tyres would rub. Rubbing against the arches will almost certainly only occur if you lower the car and widen the wheels. See the Wheel & Tyre Bible for more info on this.