Abstract This paper presents a microprocessor-based distributed system architecture designed to interconnect piezoelectric resonant sensors to a measurement and control unit. Previously, a temperature compensated force sensor was designed and prototyped, featuring thickness-shear dual mode operation driven by several pairs of electrodes, as seen in published article [1]. The starting idea to design the resonator was to optimize a particular electrodes shape that could allow dual mode excitation by electrically isolated electronic oscillators. This approach greatly simplified the electronics, knowing that dual mode operation with classical electrodes requires elaborate schematics for signal mixing and filtering to finally discriminate the vibrating mode frequencies. In our case, since the signals are already separated, only a minimal attention was paid to design of electronic oscillators, the rest of the work being devoted to frequency counting and information processing. The present paper continues the work and focuses on the electronic schematic necessary for extracting the useful output data from raw frequency values.

The force sensitive element is a plano-convex disk-shaped thickness-shear resonator manufactured in quartz. The diameter of the plate is 13.2 mm, the curvature radius of the convex side is 300mm while the thickness of the plate is 0.7 mm. The quartz crystal had an SC-cut [2]. Electrodes were made by vacuum deposition of gold over a chrome layer followed by photolithography. Resulted plates were tested extensively [1] under different force and temperature conditions. The design of electrodes is not a subject of the paper, although it should be stressed out that a good concordance was found between analytical simulation of vibrating amplitude distribution and experimental X-rays topographies [1,6] performed on the real samples.

Figure 1-2 explains the geometry of the resonator plate while figures 3.a,b,c shows several pictures of the first series of prototypes. 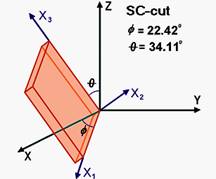 Figure 2. SC-Cut resonator geometry.  (X1’X2’X3’) is the local mode system of axis turned by the angle yn w.r.t. (X1X2X3). The external force F is applied at ya azimuth angle.

The mark in Figure 3 is made during manufacturing of plate for orientation purposes and represents the projection of the crystallographic axis –X over the (X1X3) plane of the cut. The value of the turning angle is 130.

b) Plate after UV photolithography

This part discusses electrical equivalent schematic and motional parameters values necessary to design the electronic oscillators. Afterwards it presents experimental results from testing the first prototypes and establishes the method to compute the force and temperature based on the two resonant frequencies of B and C modes.

The first series of samples were tested in a passive PI network, in order to calculate the equivalent electrical parameters, according to the schematic shown in figure 4.

Quality factors Q of the resonators were found to be equal with 211037 and 120800 respectively. Motional resistances R1 range around 20…30 kW, inductances L1 around 55…90 H, and equivalent dynamic capacitances C1 equal about 0,005 fF as seen in the table below.

Pairs of electrodes are named according to paper [1] notation. Static parallel capacitance Co of the pair P2+P4 intended to work for the C-mode is 3,1 pF and the value of static capacitance of the B-mode pair P1+P3 is equal to 2,7 pF.

The operating frequency for this pair of electrodes (P2+P4) is marked by a circle in figure 5. The rest of the modes are unwanted ones and can be further suppressed by the electronic oscillator.

Frequencies – temperature curves of the resonators were investigated under a controlled oven between –15 0C and +90 0C. However, experiments can be performed over a wider temperature range. As known, mode B offers large temperature sensitivity, with a fairly linear slope. The C-mode is temperature compensated, exhibiting a cubic frequency to temperature curve. We fitted the experimental data under different polynomials of various orders, and finally we came to the conclusion that for the interval –100C …+800C the optimum fit of the B mode is made with by a 2nd order polynomial, while the C-mode is described by a 3rd order polynomial. Larger polynomial orders do not improve significantly the correlation coefficient SD, but only complicate the formulas by adding extra terms difficult to handle by 8-bit microcontroller systems for example. 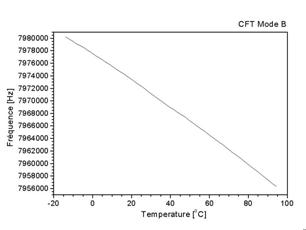 The curves are expressed by the following equations:

where t is the temperature and: 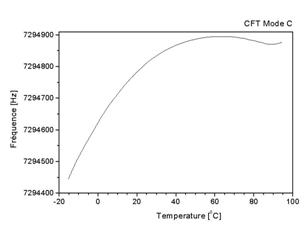 Diametral force sensitivity was previously investigated [4],[5] and is known to depend of the azimuth angle (figure 1). For a given direction the force-frequency dependence is linear up to 95% of the crushing load. 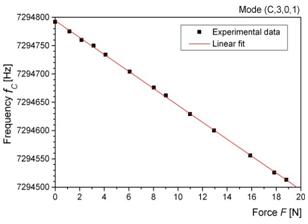 As seen in figure 3.c, we tested the resonant structure under compressional diametral force by adding calibrated weights on the mobile superior blade. Nonlinearities of frequency response in figure 8 are not caused by the sensor, but especially by the bearing frictions.

For the azimuth angleya = 75 0 the experimental sensitivity coefficients of the C and B modes are:

2.4 Transfer equations of force and temperature and related errors formulae

Finally we get the set of equations relying the frequencies to nonelectric quantities temperature and force.

From equation (x) we get the temperature value based on fB frequency and SFBF factor.

factor the set of equations become: 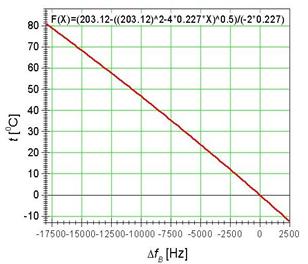 Force relative error is then given by formula: 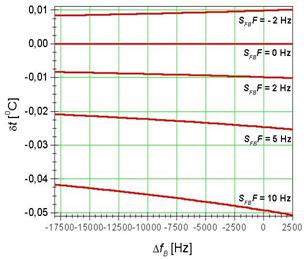 Main components of the electronic system of measurement are based on a master-slaves architecture. Precise time base is obtained from a 20 MHz reference temperature compensated oscillator (TCXO). This component is critical, since the accuracy of the system is dependant on the stability of the frequency reference; two types of connections are possible. In figure 11 the reference serves all slave microcontroller where three counters are enabled. The alternative to use two counters is to connect the TCXO to the master microcontroller which generates precise delay hardware interrupts for all slaves (figure 12).

Figure 11. Architecture of measurement system where precise delay interrupts are generated by the master microcontroller connected to a TCXO.

Figure 12. Architecture of measurement system where the reference TCXO signal is connected to the bus.

A synchronous serial interface bus to communicate with the master controller (for adjusting the registers and for delivering the data).

An in circuit debug (ICD2) interface for programming and debugging the mic-rocontroller. 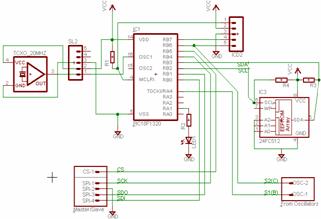 Master microcontroller (18F4550) schematic has the following features as seen in figure 14:

A synchronous serial interface bus to communicate with the slave controllers.

An LCD display and a keypad port 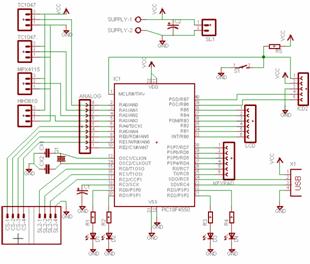 The microcontroller is able to handle USB communication. The computer interface was done by USB-HID protocol. 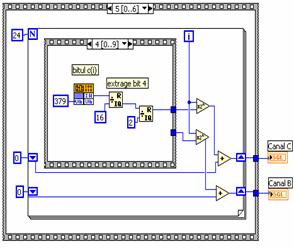 Nowadays, since microcontrollers and compilators [8] are very accessible and powerful, containing for instance integrated counters and bus interfaces, the design of high precision measurement systems for resonant sensors is straightforward, as seen in this paper. Further developments consist to improve the microcontroller-distributed algorithm and to realize a performing virtual instrumentation interface under National Instruments LabView [9].

Main author would like to acknowledge the EU project QxSens - Multi-channel measurement and control system based on resonant piezoelectric crystal sensors (G6RD-CT-2002-00648) for allowing research funding as well as the prolific collaboration with professors Roger Bourquin and Bernard Dulmet from FEMTO-ST Department LCEP/ENSMM, Besançon, France.

J. Zelenka, Piezoelectric Resonators and their Applications, Czechoslovak of , (1986)