Helysis developed and commercialized a system that cuts and binds foils as illustrated in Figure 4. 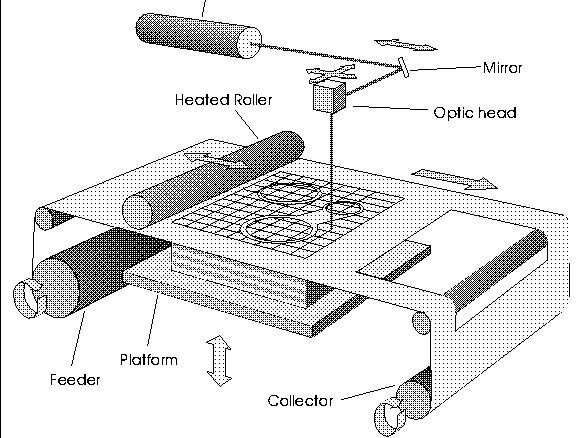 The undersurface of the foil has a binder that when pressed and heated by the roller causes it to glue to the previous foil. The

foil is cut by a laser following the contour of the slice. To help the removal of the excess material once the parts have been built,

the exterior of the slice is hatched, as opposed to fluid-based processes (e.g.the process), where the interior is hatched.

The thickness of the foil is not constant. Therefore, a sensor (not shown in the Figure) measures the current foil thickness, and

the model is sliced accordingly. 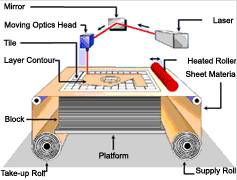 object from layers of paper with a polyethylene coating on the backside. The first step is to create a base on which

the paper can attach itself to. This is done by placing a special tape down onto the platform. A sheet of paper is

fed through with the aid of small rollers. As the paper is fed through, a heated roller is used to melt the coating on

the paper so that each new layer will adhere to the previous layer.

The carbon-dioxide laser then cuts the outline of the cross-sectional pattern into the top layer of paper. Once the

laser is done cutting the pattern, it creates a border around the build that contains the desired part. This enables

the part to stay intact as each new layer is created. Once the border has been cut, the laser then proceeds to create

hatch marks, or cubes that surround the pattern within the border. The cubes behave as supports for the part to

ensure that no shifting or movement takes place during the entire build.

When the build is completed, the part, attached to the platform, needs to be removed from the LOM. Depending

on the size of the part, the block to be removed may take more than one person to remove the build from the LOM.

After the part has been successfully removed from the LOM, it must then be removed for the actual platform. Again

this may take the work of more than one individual. A wire is used and placed between the part and the platform to

'cut' the part away from the metal platform.

The border, or frame of the part is then removed. The next step involves decubing. or removing the supports. Often

times the supports can be removed from simple shaking the part; other times it is necessary to use a chisel to pry the

cubes away from the part. When all of the cubes have been removed, the unfinished part is sanded down and a

lacquer is used to seal the part. Being that LOM parts are made for paper, humidity and temperature affect the

structure and composure of the part if it is not coated; hence, the lacquer serves as a protective measure. The LOM

adhesive laminated on one side is used. Layer fabrication starts with a sheet being adhered to substrate

with the heated roller. The laser traces the outline of the layer. Non-part areas are cross-hatched to

facilitate removal of waste material. Once the laser cutting is complete, the platform moves down and out

of the way and fresh material is rolled into position. The platform moves back up to one layer below its

previous position. The process is repeated. The prototype part has a wood-like texture composed of the

paper layers. Since moisture is absorbed by the paper, most models are sealed with a paint or lacquer.

Parts can be made quite large.

Accuracy in z is less than that for and SLS.

Outside of model, cross-hatching removes material.

Models are sealed to prohibit moisture.

Not as prevalent as and SLS®. 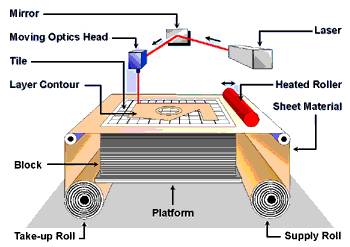 Profiles of object cross sections are cut from paper or other web material using a laser. The paper is

melts a plastic coating on the bottom side of the paper. The profiles are then traced by an optics system

that is mounted to an X-Y stage.

After cutting of the layer is complete, excess paper is cut away to separate the layer from the web. Waste

paper is wound on a take-up roll. The method is self-supporting for overhangs and undercuts. Areas of cross

removal. It can be time consuming to remove extra material for some geometries, however.

Variations on this method have been developed by many

Lamination Technology (PLT) uses a knife to cut each layer

xerographic process. There are also variations which seek to

increase speed and/or material versatility by cutting the edges of

In general, the finish, accuracy and stability of paper objects

are not as good as for materials used with other RP methods.

However, material costs are very low, and objects have the

same manner. This has fostered applications such as patterns

for sand castings. While there are limitations on materials, work

has been done with plastics, composites, ceramics and metals.

Some of these materials are available on a limited commercial

The principal commercial provider of LOM systems, Helisys, ceased operation in 2000. However, there are

several other companies with either similar LOM technology, or in early commercial stages. These companies

What ever the application, ESG has the manufacturer to fit your needs and your pocket book. 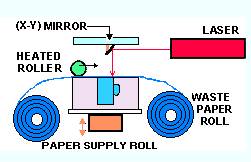