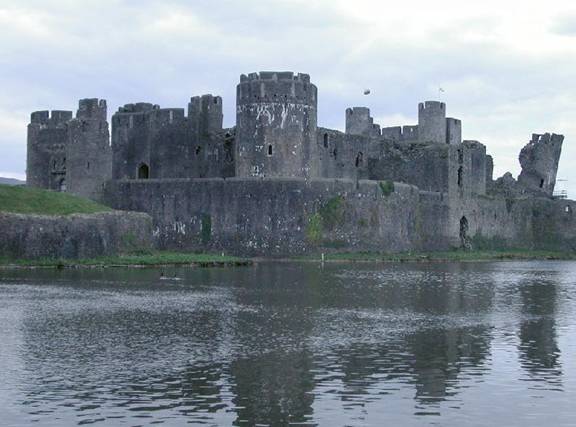 
Caerphilly Castle is one of the great medieval castles of western Europe. Several factors give it this pre-eminence - its immense size (1.2h), making it the largest in Britain after Windsor, its large-scale use of water for defence and the fact that it is the first truly concentric castle in Britain. Of the time of its building in the late 13th century, it was a revolutionary masterpiece of military planning

One of Henry III's most powerful and ambitious barons, Gilbert de Clare, lord of Glamorgan, built this castle. His purpose was to secure the area and prevent lowland south Wales from falling into the hands of the Welsh leader Llywelyn the Last, who controlled most of mid and north Wales. De Clare built other castles on the northern fringes of his territory for the same purpose, such as Castell Coch. He had seized the upland district of Senghenydd, in which Caerphilly lies, from the Welsh in 1266 to act as a buffer against Llywelyn's southward ambitions. Llywelyn realised the threat and tried but failed to prevent the castle from being built; it was begun on 11 April 1268, was attacked by Llywelyn in 1270, and was begun again in 1271. This time it was completed without hindrance. Its message was not lost on Llywelyn, who retreated northwards. Apart from the remodelling of the great hall and other domestic works in 1322-6 for Hugh le Despenser, no more alterations were carried out, making it a very pure example of late 13th-century military architecture. 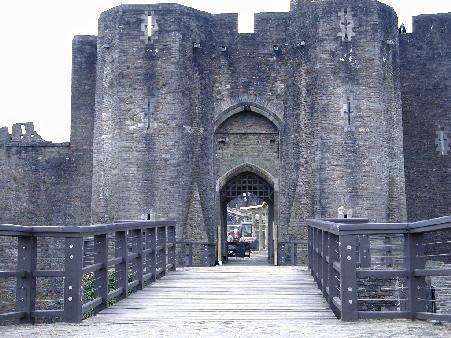 Caerphilly is unusual in being a late castle built on a virgin site. This allowed a unity of conception rare in medieval castles. It is a double-skinned parallelogram surrounded by large-scale water defences. The concentric arrangement was more flexible than earlier plans. It gave rapid access to any part of the castle by mural passages and wall-walks, towers and gatehouses could be independently held, attackers could be well covered and there was no possibility of mounting siege engines against the inner walls. The castle’s cellular structure and strength is indicated by the presence of numerous portcullises. 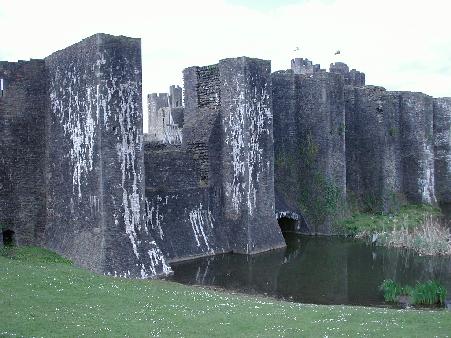 The outer skin or ward is formed by a low battlemented curtain wall with large semi-circular projections in the corners and gatehouses in the middle of the east and west sides. Only a narrow strip separates this from the much stronger inner ward which has high curtain walls, circular corner towers and two large strong gatehouses corresponding with the outer ones. The great east gatehouse is the highest part of the castle and was its nucleus. As will be seen, it could be separately defended if necessary.

The south and north lakes around the castle formed an almost insuperable barrier to attackers. The dams themselves are a major achievement of medieval engineering. The southern, earliest one is a massive earth platform revetted in stone and strengthened on its lower side by eight great buttresses (below left). To the right of the entrance to the castle is the northern dam, a narrower platform with a high outer wall with three great towers (below right) which are now unfortunately suffering from subsidence on the marshy ground. At its end is a strong postern gate and drawbridge. Outside the dam is a moat fed by sluices in the southern dam. 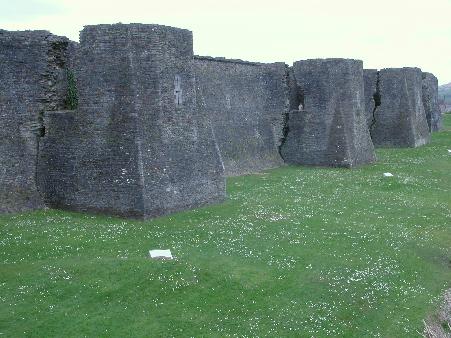 View of the southern dam at Caerphilly. 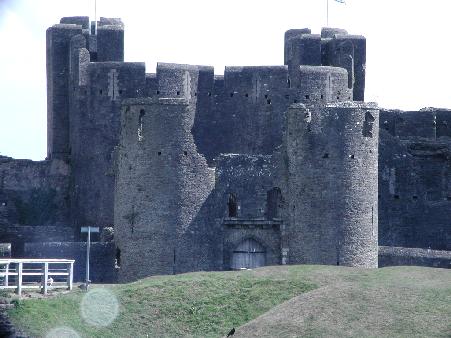 View of the three great towers along the northern dam. 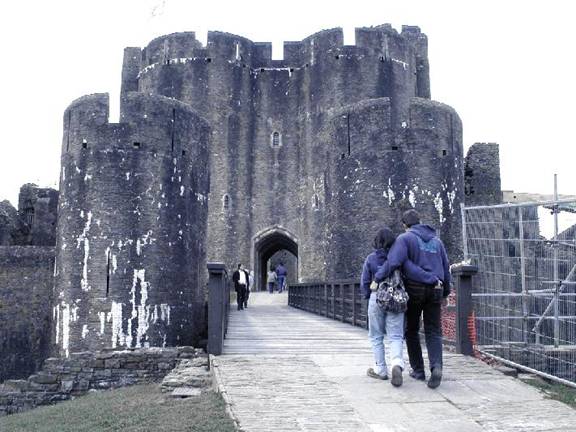 The outer defences were completed by making a 1.2h artificial island to the west of the castle, known as the hornwork. A trench had already been dug in the early stages of construction outside the west side of the castle; now another was dug further west and the area between was raised, levelled and revetted in stone to form the hornwork. The north-west side has two semi-circular projections covering the drawbridge, the ruins of which can be seen between them.

Right: the outer east gatehouse at Caerphilly, the main entrance to the castle. 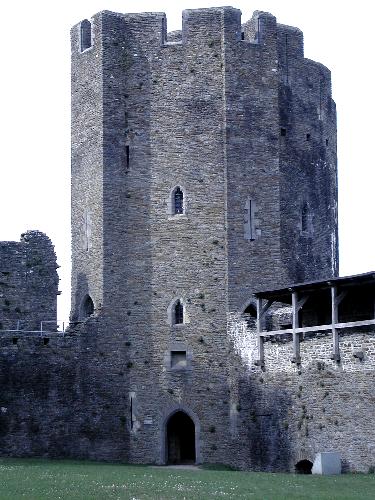 The outer gatehouse on the east side (right) is both the present and the original entrance. Here the main characteristics of the castle as deterrent become apparent - its great strength, its severity, its lack of windows and lack of decoration. Inside the gatehouse is an exhibition about the castle, and stairs lead up to roof level, from which is a panoramic view. Crossed rather than plain arrowslits in this gatehouse and in other buildings on the dams show that they are slightly later than the main castle. To the left is the platform of the south dam, the wider northern end of which may be partly natural, but the southern end of which is entirely artificial. Half-way along are the ruins of a mill, and at the south end are two towers and a rectangular gatehouse which gave access to the medieval borough (below). 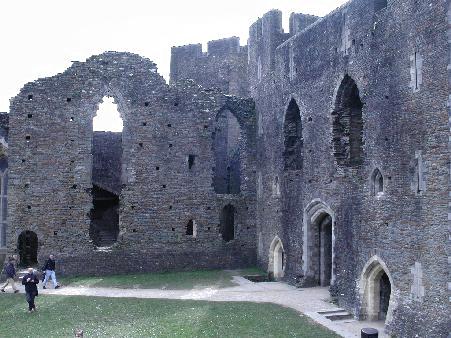 Left: the south gatehouse at Caerphilly leading to the town. 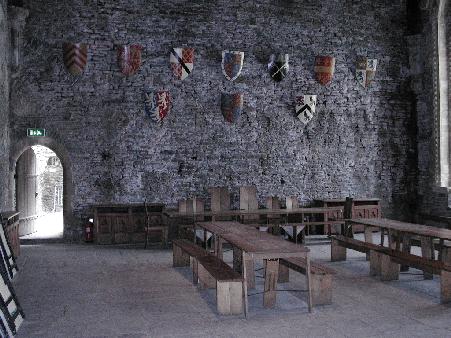 Right: view of the outer west gatehouse from the hornwork. 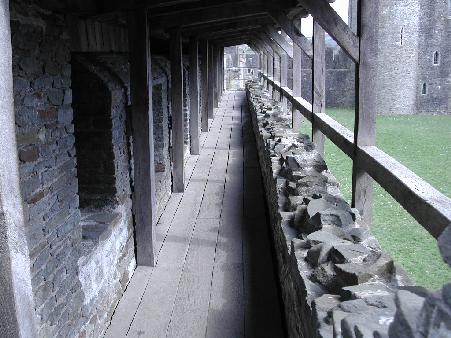 Next is the outer ward entered via a bridge leading to its east gatehouse with twin D-shaped towers, only the restored outer walls of which remain. Its opposite number on the west (right) is slightly better preserved. There, the stone piers supporting the drawbridge leading to the hornwork can be seen, as can chimneys and fireplaces on two floors, indicating comfortable living quarters. The false machicolation, poorer masonry and chimneys may indicate that the gatehouse was rebuilt at a later date. In the south-east corner is the base of a large rectangular building, possibly a granary. The south side is entirely blocked by a two-storey D-shaped kitchen tower, stores and servants’ quarters. Below is a water-gate to the lake.

The inner ward is the most impressive part of the castle. The corner towers demonstrate varying degrees of preservation. The north-west tower is complete, and an exhibition on Welsh castles is housed there. Little remains of the north-east tower and the south-east tower is partly ruined. It stands 15m high and leans at an alarming angle, 10 degrees out of true. The cause, whether subsidence or Civil War slighting, is unknown.

The imposing east gatehouse of the inner ward is the climax of any visit to the castle. It consists of twin D-shaped towers, a central passage with portcullises at both ends, and circular stair turrets on the inner corners. Like much of the inner ward it was ruinous by the 19th century, but was meticulously restored by the 4th marquis of Bute. The handsome and comfortable apartment on the second floor was probably that of the keeper, or constable of the castle. On the opposite side of the inner ward is a similar but smaller gatehouse. Whoever occupied the first floor lived in less comfort than the constable as the portcullis came up through the floor in the middle of the room.

Below: the inner east gatehouse at Caerphilly. 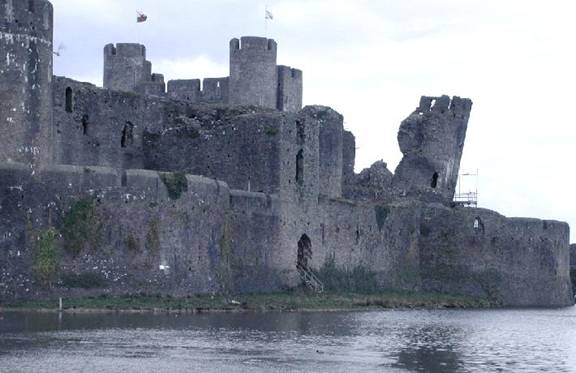 On the south side of the inner ward are the great hall and state apartments. The large ground-floor hall, which was evidently a sumptuous building, was remodelled by Hugh le Despenser the Younger in 1322-6 and was restored by the 3rd marquis of Bute in the late 19th century. Originally the timber roof was lower, carried on the four carved corbels still in place in the south wall. Hugh le Despenser brought in the best craftsmen, who raised the roof and gave the four windows a decorated ogee shape, rich mouldings, and glass. The door was treated in the same way, and the whole building was faced with ashlar. The two doors at the east end led to a buttery and cellar, possibly with a small chapel over them. To the west were the state apartments, well-appointed rooms with fireplaces and a large traceried window on the first floor. 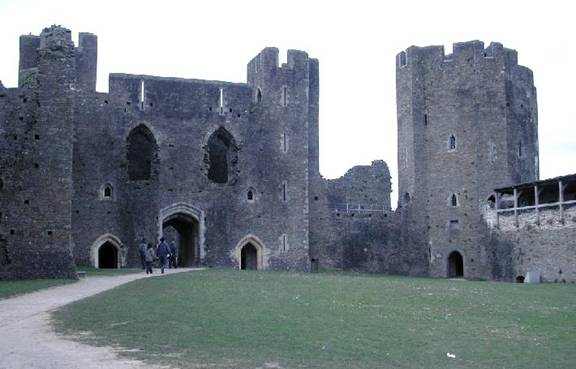 Exterior view of the great hall from the inner ward.

The castle’s active history was an extremely short one. By 1283 Edward I had removed the threat of Welsh independence and the need for Caerphilly had gone. Minor Welsh attacks in 1294-5 and 1316 failed to make any impact. The last action that Caerphilly saw was in the war between Edward II and his queen, Isabella. Intent on destroying the power of her husband and his favourite Hugh le Despenser, Isabella besieged the castle from December 1326 to March 1327. But by this time Edward had fled and Hugh had been hanged. Thereafter the castle declined and fell into ruin. In the late 16th century Thomas Lewis of The Van, just outside Caerphilly, was granted permission to use its stone to build his new house, thus accelerating its dilapidation. In the Civil War it was unusable and an earthwork redoubt was built instead to the north-west, the remains of which are still visible in the trees beyond the north lake. By the 18th century the lakes were dry and houses had been built against the foot of the south dam. That the castle rose again from its sorry state is due to the visionary clearance and restoration work undertaken by the Bute family and the imaginative reflooding of the lakes by the state in the 1950s.