Mathcad makes it easy for you to create an x-y plot. Just click in a new file, type an expression that depends on one variable, for example, sin(x), and then click on the X-Y Plot button

in the Graph Palette, or choose X-Y Plot from the Insert/Graph menu. Then press [Enter]. Voila, a plot! You should see a nicely formatted plot that looks like this:

. Try typing y^2[spacebar]-3*y, followed by the key (a shortcut for creating an x-y plot). Mathcad will plot over a reasonable default range for the dependent variable in your expression. Here are a couple of other expressions you can try plotting in this way:

When you graphed the above expressions, Mathcad was choosing a default range for the dependent variable. You can have control over the range of values that are plotted. To graph a simple function using a range variable, do the following:

Define a function of one variable that you wish to plot. For example, graph the following function: Type f(x):-x^2[Spacebar]+8*x-27 See on screen

Define an independent variable for the horizontal axis. For example: Type x:0;10 See on screen

Those of you familiar with the plot of

will notice that the trace looks a little rough. To smooth the trace out, try changing the definition of

. The smaller increment (or step) means more points calculated, which means more plotted, which makes the trace smoother because Mathcad is simply connecting the dots.

To format an x-y plot, just double-click on it (or choose Graph from the Format menu) to bring up a formatting dialog box. The tabbed dialog box lets you change options for logarithmic axes, grid lines, legends, trace types, markers, colors, axis limits, and more. Experiment with the x-y plot below. Double-clicking on any Mathcad plot -- contour, surface, polar, vector, etc. -- brings up an appropriate formatting dialog box.

Here is a vector of data points called money_spent. We created the vector using the Matrix command on the Insert menu; our vector below has 8 rows and 1 column.

To plot these data points, the horizontal axis must be either (a) an index variable into the variable

or (b) another vector with the same number of elements. For case (a), first define an index into the vector:

Create your plot by typing and typing 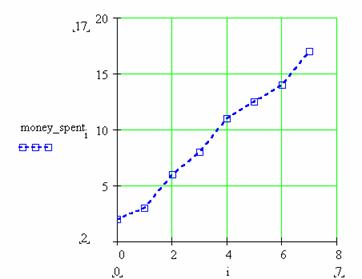 Notice here that box symbols have been used on a dashed blue line.

To demonstrate case (b), plotting two vectors of equal size against each other, we will define a second vector, called day:

Now it's easy: Create the plot by typing , as above, and type

in the placeholder on the y axis, and

in the placeholder on the x axis.

The resulting plot should look similar to this:

Here the 'points' trace type has been used with magenta O's. Notice that grid lines have been turned off on both axes.

Graphing a Function of Vector Elements

You can plot a function over a domain that doesn't contain evenly spaced points. For example, your domain could consist of a vector of values. Plotting a function of vector elements entails defining a function, defining a vector which will be the domain for the function, and plotting. An example of this is:

Define a function of one variable.

Define a vector of numbers to be the domain for the function. Type x: followed by [Ctrl]M , and fill in the Matrices dialog box with the appropriate number of rows and columns (here, 5 rows and 1 column), followed by OK. Then fill in the placeholders in the vector.

Define an index variable. Type i:0;4 See on screen

The result should look similar to this:

Here, the difference with plotting a function of a range variable is that the horizontal axis does not have to be in even increments (such as 1, 2, 3, , 10). Rather, it can be any set of numbers you may wish to plot.

Plotting multiple functions over a single domain on a single graph is straightforward. For example, suppose you want to plot both

on one plot. It's easy! Just type the two expressions separated by a comma and then type

In this example both expressions are plotted over the same default range of values, but you could use two separate range variables if you wish. Try it out in your worksheet window now.

Type in some blank space.

In the middle placeholder on the horizontal axis, type x,t

In the middle placeholder on the vertical axis, type f(x),g(t)

As you can see, plotting more than one function is simple --- just separate your arguments with a comma ( The same syntax holds for plotting multiple traces using vectors and functions of vectors.