With a solid project definition, plan, and organizational infrastructure, Perry is confident that he can control his project. He is not naďve enough, however, to think that he can sit back and remain idle. Quite the contrary, he knows all about Murphy’s law. He knows from the physicist’s view of the universe that entropy can occur.

Status data offer several advantages for Perry. From the data he can determine project performance — specifically, how well the goals of the project are being met. He can also determine how efficiently work is being done. He can reduce his and everyone else’s frustration and anxiety by providing feedback. It instills confidence in everyone that the project is under control, that the project manager is monitoring its pulse. Finally, he can maintain communications and information sharing among the participants.

Unfortunately, status data are often not collected well. The task can be labor intensive and time-consuming. This is especially the case when there is no previous infrastructure in place or when the team members lack experience. If the project manager, or the team, lacks the expertise or knowledge of collection, there may be an inappropriate assessment. Also, the project team may be using incompatible computing tools and converting the data requires considerable effort and expertise. Teams using older software and hardware particularly find this situation complicates data collection.

Perry, fortunately, is not one of these project managers. He understands the importance of reliable data. He must have certain prerequisites in place to do meaningful assessments.

A solid information infrastructure. He sets up a process for identifying, collecting, and compiling data that will be reliable and valid.

Available expertise. He assigns responsibility for collecting data to someone who has a good understanding of data collection techniques.

A standardized set of tools to collect and compile the data. He knows that a mixture of incompatible hardware and software will cause frustration levels to rise and nobody, not even himself, will bother to collect data.

Clear value in collecting data. If people do not see the value of data collection, they will be reluctant to expend the effort. Collecting data must be meaningful on both individual and group levels. This distinction is important, since it affects how the data will eventually be formatted and reported.

The status review, discussed in Chapter 13, is held regularly. The meeting covers cost, schedule, and quality measures. Perry collects data prior to the status review, so that at the meeting he can discuss the current status, make an assessment, and determine corrective actions. With proper technology, he could, at the meeting, enter the data into a computer, generate the necessary reports, assess the program, and decide an appropriate action to take.

There are problems with collecting data at status review meetings. For example, sometimes the meetings can skew results. Peer pressure can directly or indirectly force people to fudge the data in order to paint an optimistic or pessimistic picture. It is also important to remember that while collecting status data, the project manager remain objective and not influence the reports. The project manager must hear what he needs to hear and not what he wants to hear. Biased data lead to biased assessments.

One-on-one sessions work best for collecting data just prior to a status review. The project manager or her representatives meet with each person individually to collect status data.

But as the number of team members increases, so does the time needed to collect data and, as time passes by, the data age. Also, the data collected in one-on-one sessions could be more subjective than if gathered in a group setting. If peer pressure does not overtake a status meeting, more objective data will likely be available as people question the reports.

Forms are another way to collect data. Team members complete the forms with status data and submit them to the project office for processing. The data are then compiled. Ideally, the forms are computer-based and team members can forward them electronically for quick, easy compilation.

Collecting data on forms presents a challenge, however. Getting the forms submitted on time is one problem, since some people often procrastinate. The other is that forms may get lost. Both problems grow in magnitude as the number of team members gets larger.

Informal modes of data collection include holding ad hoc sessions, using word of mouth, and relying on your own judgment regarding status. Informal modes are quicker and involve less administrative hassles; they are the path of least resistance. But the data collected may not be objective, resulting in a greater chance of error. Still, many project managers rely on informal methods.

Perry decides to use both formal and informal modes of data collection. He uses status reviews to verify the accuracy of the data collected in one-on-one sessions and via forms. But he also keeps his ears open for additional information.

When collecting data, Perry keeps two main concepts in mind: reliability and validity. Reliability implies consistent results—in other words, does the data yield reliable results? Validity involves the approach or tool used to collect data. Does it influence the results, thereby introducing bias, which in turn slants the results?

Some validity errors include inconsistent application of measurement tools, failing to account for changing circumstances, using a collection tool that guarantees a particular result, and undue influence by the personality of the data collector. These are threats to data validity because they influence the data being inputted and the information being derived.

There are other examples of how collection efforts can negatively influence data reliability and validity.

The effect. What was accomplished just prior to collection influences a person’s estimate of the amount of work done. The problem is that what was done last may not be significant, giving a misleading impression.

Overly negative or positive data. Some team members always exaggerate, saying too much or too little has been done.

Lies. Rather than give honest data, some people lie, figuring perhaps no one will know or the project manager will eventually leave before anyone finds out.

With reliable and valid data, Perry can assess overall project performance. Assessment involves determining how well the project has and will achieve its goals. Perry focuses on three areas: schedule, cost, and quality.

A key concept behind assessing status is variance, the difference between what is planned and what has actually occurred up to a specific point. The formula is quite simple:

If the difference between the two is zero or a positive number, then the project is proceeding as expected, whether from a cost, schedule, or quality perspective. If the difference between the planned and the actual is a negative number, then the project is not progressing as anticipated. Quality variance is discussed in Chapter 16; the remainder of this chapter deals with cost and schedule variances.

It is important to note, however, that variance is a deviation from what is expected. The deviation in itself may not necessarily mean something is wrong—it can indicate something good, too. A variance is a signal to investigate the situation and determine whether to take action.

The tracking portion of the variance calculation is the actual to date. The monitoring portion is the estimate at completion; it is based on actual progress to date plus the remainder of work to do, assuming the current rate of progress is maintained.

Cost variance is calculated by using this equation:

The equation result tells Perry whether he has spent more money than planned up to a specific point in time. He calculates it for each task, which in turn is accumulated to give the total estimate at completion for the entire project. A positive value is called an underrun and a negative one is called an overrun. Exhibit 15-1 shows examples of cost variances on the Smythe Project.

Schedule variance follows the same pattern. It is the difference between planned and actual start and end dates, respectively. This variance tells Perry whether he has spent more time than planned on a task up to a specific point in time. He calculates it for each task, which in turn is accumulated to give the total estimate at completion for the entire project. A positive value represents an ahead-of-schedule condition while a negative one represents a behind-schedule situation. Exhibit 15-2 has some examples from the Smythe Project.

In the previous section, cost and schedule variances were treated independently. There is, however, a way to treat them as an integrated entity, called earned value. It is the preferred way to measure project performance.

The BCWS, BCWP, and ACWP are all instrumental in calculating the cost variance (CV) and the schedule variance (SV), which in turn are used to assess individual and project performance. Here are the calculations for both:

For the Smythe Project example (using $ in thousands):

For ease of calculation, the best approach is to convert the cost variance and schedule variance to percentages:

For the Smythe Project example (using $ in thousands):

The values are then plotted cumulatively over time for all three variables as shown in Exhibit 15-3. Again, this can be performed for one task or the entire project.

After calculating the BCWS, BCWP, and the ACWP, Perry can determine in what combination of the following circumstances he might find the project: 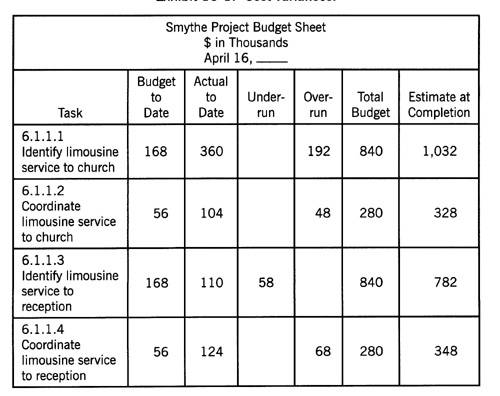 A project plan serves no purpose if no one knows or cares if it is being followed. Perry, therefore, regularly keeps a “pulse” on the schedule and cost performance of the project. He collects and analyzes data to ensure that plan and reality match as closely as possible. If a variance exists, he determines whether to take corrective action. Of course, a variance can exist for quality as much as it does for cost and schedule. Perry knows that and ensures that metrics also exist to measure quality.

Questions for Getting Started

When collecting data for determining cost and schedule status, did you determine:

Obstacles you will face?

Tools to do the job?

Type of information infrastructure you want in place?

Ways to communicate the value of collecting status?

In regard to status reviews, did you determine whether to collect data prior to or during the meetings?

When collecting data, did you identify the threats to reliability? To validity? How will you deal with those threats?

When assessing status, what variables will you look at? Variances? Cost variance? Schedule variance? Earned value? How will you go about calculating them and how often? Will the calculations be for selected tasks or the entire project?