CORRELATIONS BETWEEN SERUM INHIBIN B AND OTHERS OVARIAN MORPHOFUNCTIONAL PARAMETERS

Correlations between serum inhibin B and others ovarian morphofunctional parameters

Inhibin B seems to be a direct measure of fertility, low levels of serum inhibin B (below 45 pg/ml) are associated with impaired ovulation, decreased success with in vitro fertilization and an increased risk of miscarriage.

Inhibin B is produced in granulosa cells of the dominant follicle and its secretion has two peaks: 7 days prior the LH surge and 1 day after the ovulatory .

Both serum levels of inhibin B and FSH are currently used to appreciate the response of IVF procedures; measurement of FSH levels alone has some limitations because its values are variable from month to month and its discriminatory capacity in the upper panel of the normal values is limited.

PCOS patients seem to have higher levels of serum inhibin B and obesity is correlated with lower levels compared with general population.

Aim of the study – to identify the possible correlations between serum levels of inhibin B on day 3 of the menstrual cycle and other morphofunctional ovarian parameters.

We measured the serum levels of FSH, LH, estradiol and inhibin B on day 3 of the menstrual cycle; ovarian and uterine morphology were assessed using endovaginal ultrasound.

We did not identify any correlation of serum inhibin with serum estradiol or LH, nor with the patients’ age or BMY.

Inhibin levels were higher in patients with rhythmic menstruations, but this observation did not reach statistical significance.

Inhibin B is a heterodimeric glicoprotein of the TGF family, produced by the granulosa cells of the developing cohort of early antral and antral follicles. Its secretory pattern shows two peaks - one in the mid-follicular phase, and the second – one day after the LH peak.

Although its main function is to controll the pituitary FSH secretion, several paracrine actions have been described – inhibin B stimulates the techal androgen production by increasing LH receptor expresion.

It has been proposed as an indirect marker for fertility, as low levels of inhibin ( below 45 pg/ml on day 3 of the menstrual cicle) are associated with decreased ovulatory rates, IVF failure and an increased rate of misscariage.

Inhibin B has recently become one of the markers used in IVF succes rate evaluation, since FSH levels alone have been proven to have some limitations, related to its inter-cicle variability and its decreased discriminatory value, when levels are in the upper normal range.

Inhibin B is sometimes elevated in PCOS patients, but obese patients seems to have lower inhibin levels.

Our study’s goal is to identify a correlation between serum inhibin levels in the early follicular phase and other frequently used ovarian markers.

We measured the serum levels of FSH, LH, estradiol and inhibin B in the early follicular phase (on days 3-5 of the menstrual cycle and randomly for patients with irregular menses); ovarian and uterine morphology were assessed using endovaginal ultrasound

The laboratory methods used to determine the hormonal parameters were:

ovarian volume – according to the equation: V= 0,523* L*l*H, which conveys an elipsoid ovarian shape;

The Spearman correlation coeficient and linear regresion (simple/multiple) were used to identify rellations between the chosen parameters; p values lover than 0,05 have been considered statistically significant. For statistics, wee used the SPSS 15.0 for Windows.

Our group’s clinical and morpho-functional characteristics are presented in table 1.

The etiology of infertily could not be identified in most of our cases –adica e idiopatica?mi se pare mai clar spus idiopatic daca asa e, decat nu stim ce au avut(66,6%, n=12); 3 patients met the PCOS criteria, 1 patient was diagnosed with primary ovarian failure (FSH = 104,8 mUI/ml), 1 patient had an intracavitary mioma, and in one case the infertility cause was male pathology.

All patients had normal PLR values.

Twelve patients presented with primary infertility, while 6 other have had at least one spontaneous pregnancy.

The analyse of the indepent selected parameters showed a strong negative relationship between inhibin and FSH values on day 3 of the menstrual cicle (coeficient corellation-nu stiu cume in engleza L = -0,706, p<0,001) – fig. 3.

Serum inhibin levels during the early follicular phase correlates both with the estimated ovarian volume and the number of follicles described echographically, fact that confirms the literature data about higher inhibin values in PCOS patients (Lockwood et al.

The explanation for this finding lies in the characteristic presence of a large number of early antral follicles in PCOS, which are all a source of inhibin B.

We found no significant relationship between inhibin values and body mass index or age respectively, but this result is probably due to the limited composition of our group – the patients age ranged between 30 and 47, while their weight fell within normal limits or the slightly overweight range ( maximum BMI = 27,5 Kg/mp).

Inhibin B levels have also differed between patients with primary and secondary infertility. 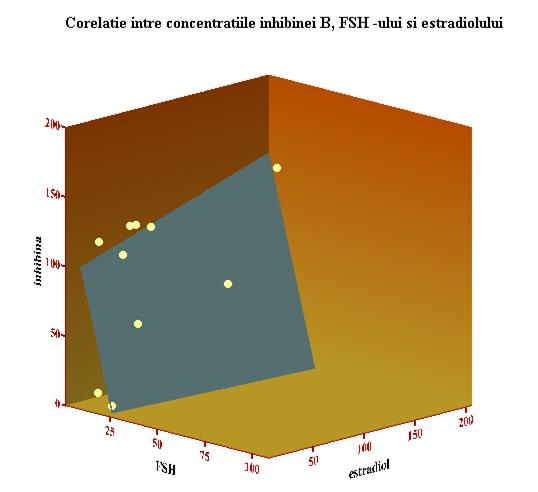 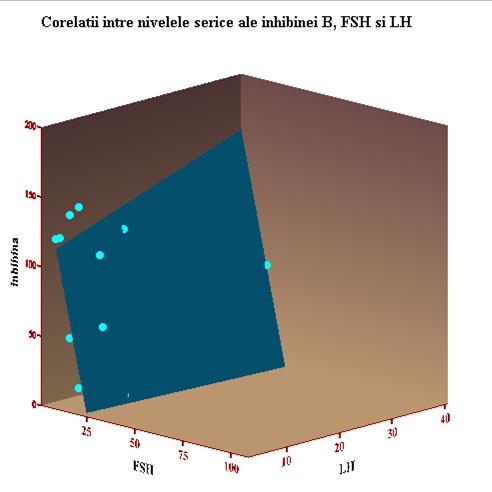 nhibin B values have also shown a dependency on plasmatic estradiol values and ovarian volume (r2=0,56) – the lowest inhibin B levels were found in patients with reduced ovarian volume and low early follicular phase estradiol. This result is sustained by the fact that inhibin production is the expresion of early antral phase follicular activity (fig. 9).

We have not identified a similar significant linear regresion model when taking into account the common influence of FSH and ovarian volume, or that of FSH and antral count respectively on inhibin B levels, probably due to the strong inhibin B – FSH dependence. Thus, high inhibin levels were correlated with normal FSH levels, but with a rather wide distribution of ovarian volume and antral count – fig10,11. 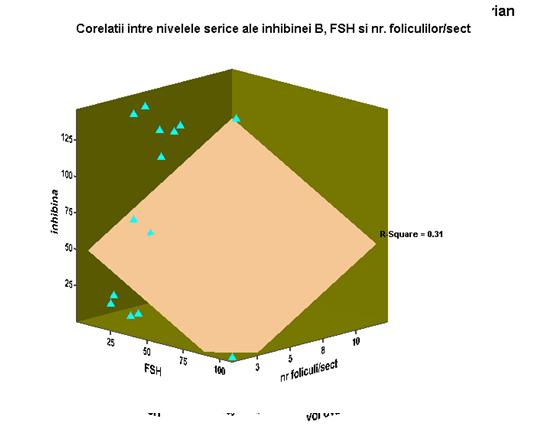 Inhibin B is an accurate marker of ovarian reserve, fact proven by its correlation with the ovarian volume and antral count.

There is a statistically significant concordance between inhibin B and FSH levels in the early follicular phase.

Since a strong correlation between levels of FSH, E2 and inhibin B measured on the third day of the menstrual cicle has been proven, a single evaluation of the latter may accurately predict the ovarian reserve.

Serum levels of inhibin B on day 3 of the menstrual cicle contribute to a more sensitive fertility evaluation for patients with borderline FSH levels, between 15 an 30 mUI/ml.

Further studies on larger groups of subjects are required to evaluate the connections between inhibin B and body mass index or the causes of infertility.