INTRODUCTION
In Western dialogue, the concept of sexology is an umbrella term that incorporates various academic disciplines.1-3 The psychological theories of Freud and Kraft-Ebing established the foundation for European sexology in the late 19th and early 20th centuries. In America, it was given impetus in the mid 20th century in the Kinsey statistical reports on the sexual behavior of men and women.4,5 Medical sexology is a more delimited approach that considers the health aspects of human sexuality. However, it is inappropriate to distinguish too sharply between these endeavors since major developments such as oral contraceptives, HIV/AIDS epidemic, sildenafil, and the abortion pill RU-486 (mifepristone), are the objects of both medical and social concern. One author2 suggests that the optimism generated by the sexual revolution of the 1960s and 1970s is being superceded by a more negative view of sexuality as 'the source and scene of oppression, inequality, violence, abuse, and deadly infection.'

The fundamental idea behind medical sexology is that sexuality is a vital component of total health and well-being. Therefore, it is a vital component of medicine, especially family practice, in which physicians frequently must handle various sexual concerns including decline/ loss of libido, ejaculation/orgasm problems, and intercourse difficulties. Maurice3 notes that medical schools around the world offer little clinical training in this important area; his text provides a relevant and comprehensive clinical resource for family physicians.

This article will review the scope of traditional Chinese sexology, the author's clinically-based medical acupuncture approach, and useful and effective acupoints for the treatment of sexual dysfunction. Traditional Chinese Sexology
Perhaps the most famous traditional treatise on sexology is the Kama Sutra.6 Based on a number of ancient Hindu sources dating back several centuries BCE, this compendium may be viewed as a positive, interesting, and stimulating approach to the practical and esoteric art of sexual love between a man and a woman. Less well-known than the Kama Sutra, but equally comprehensive in scope, are the ancient Chinese sexology texts. Most of these texts were discovered in 1973 at the Ma Wang Tui Han tomb in Changsa, Hunan Province, China. They date from 168 BCE and comprise the bulk of the more than 20 ancient Chinese sex handbooks from the beginning of the Han Dynasty (206 BCE) to the end of the Tang Dynasty (AD 907).

According to the ancient texts, traditional Chinese medical sexology pertains to a female giving Yin and receiving Yang, and a male giving Yang and receiving Yin. In principle, it is an equal and harmonious libido exchange since Yin is female Qi and Yang is male Qi. Both the Yin and Yang modalities of Qi are present and active in every male and female.7,8 A healthy sexual relationship between a woman and a man involves mutual exchange of Yin (i.e., yin dao, vagina) and Yang (i.e., yang ju, penis) for the equal benefit of both partners. This exchange, which is physically, mentally, and spiritually embodied in sexual intercourse, constitutes a healthy and balanced sexual relationship. In Taoist terms, it mirrors the harmony of nature and contributes to one's longevity. Moderation is recommended; excessive sexual activity depletes Yin in males and Yang in females.

Male sexual dysfunction and decline/loss of libido largely pertain to KI Yang Deficiency. The female counterpart basically refers to KI Yin and Yang Deficiency. The key meridians for males that require tonification are the KI, LR, and TH; for females, the KI, SP, and PC. For both sexes, stimulation of the CV and GV extraordinary meridians is indicated to boost systemic Qi flow.

It is useful to distinguish between these complex physiological and psychological sexual disorders and those ordinarily encountered in male and female urology and gynecology.12,13 Females not only have various special problems surrounding menstruation, pregnancy, and menopause, but also more complex problems such as inhibited sexual response and dyspareunia ('frigidity'). Special male problems include erectile dysfunction and premature ejaculation ('impotence'). Regarding menopause in both sexes, libido does not necessarily decline with hormonal deficiency due to aging.

TREATMENT
Virtually all the author's patients are received as referrals from other physicians, and are considered to be difficult cases unresponsive to biomedical treatment (mainly drug therapy). The complete biomedical data for each referred patient is then reviewed. A Four Diagnosis evaluation (inquiry, observation, palpation, and auscultation/olfactory) is conducted. Assessment is made of a patient's Shen (spirit) and other techniques to select the optimal acupuncture points for stimulation.

Basic electroacupuncture14 is utilized in about 90% of clinical treatments; most patients have chronic conditions and electroacupuncture is a more powerful tool for these conditions. Electroacupuncture generally produces a stronger stimulation than the standard insertion of acupuncture needles. Moreover, electroacupuncture allows the electrical stimulation to be precisely adjusted according to what is required for specific conditions. Electroacupuncture is beneficial not only for controlling pain, but also for harmonizing Qi. It may be applied by various devices such as the 4-channel outlet model (ITO IC 4107) that is commonly used in clinical practice. A low frequency and intensity pulse of 2 Hz/second with square wave forms are indicated for normal pain control (endorphin release), and Qi balancing. A higher frequency and intensity pulse (100-300 Hz/second with square wave forms) are indicated for more severe disorders involving the major internal organs and the central nervous system (serotonin release).

The treatment goals are the same as for traditional acupuncture, namely, to alleviate pain and harmonize Qi. Patients generally feel relaxed during their 30-60 minute experience of being connected to the electroacupuncture device. Initially, the procedure is the same as for traditional acupuncture. The relevant acupoints are selected and the needles are inserted with the requisite tonifying or sedating manipulation. Then, once the De Qi needling sensation has been achieved at each site, the wires of the device are clipped to the needles and the current is applied.

Assessing treatment efficacy is largely based on patient self-reports. Results are generally good, with most patients reporting symptom control and enhanced well-being. A trial course of 3-4 treatments is given to see how patients respond to acupuncture. If they wish to continue, patients are treated 2 times weekly for 2 weeks, 1 time weekly for 1 month, and 1 time monthly until they report feeling healed. Ongoing maintenance 2 times yearly is offered (or, according to the patient's needs). Ancillary techniques are also used, including acupressure, moxibustion, cupping, and auriculotherapy. Auricular acupuncture is sometimes useful in supplementing the traditional approach. According to TCM theory, several points and areas on the ear are effective in human sexuality: External Genitalia, Kidney, Liver, Shen Men, and the 2 Sympathetic Lines. Ear press pins may be inserted for 1-2 weeks; the patient is instructed in pressing them for self-care.

CASE REPORTS
For the 3 cases presented, follow the protocol delineated above. Specific acupuncture points are indicated in each case, with the locations as described by Xinnong.15 Some of these points are on the list of 'pearls' of medical acupuncture in sexology that the author has developed through clinical experience (Table 1). Informed consent was obtained from each patient described.

Case 1
A 35-year-old woman was referred with loss of libido, fatigue, and sleep disturbances (frightening nightmares). During her childhood and early adulthood, she experienced sexual abuse by an uncle, including sexual intercourse. Married for 10 years with 3 children, the patient considered her marriage a priority. She received various biomedical therapies such as antidepressants and psychotherapy for what was perceived to be her sexual problem. She appeared depressed and overweight, with a lack of interest in sex and, indeed, her life. The patient had a history of asthma and colitis as well as hormonal problems which, apparently, led to moodiness, anger, and irregular menstruation (mainly, amenorrhea). Since she had experienced severe trauma that remained clinically unresolved, she was assessed as having a severe case of Kidney Yin and Yang Deficiency with weak Shen.

To open the Qi gates and release her 'emotional pollution,' PC 6 (Inner Gate) and TH 5 (Outer Gate) were bilaterally stimulated , as well as SP 10, LR 3, ST 44, and GB 43 (Lower Limb Gates). To help release her past psychological trauma, CV 3 and CV 5 were stimulated.

The patient's sexual dysfunction was then treated. For females, this involves the SP and KI. Bilaterally needled were SP 6, SP 9, and SP 10, as well as KI 3, KI 6, KI 7, and KI 10. In order to boost the patient's Qi, CV 4, CV 6, CV 17, and GV 4 were also stimulated (during the trial course, 2 times weekly for 2 weeks). While this patient responded well during the course of treatment, the recommendation was made that she consider other complementary therapies such as hypnosis to treat her deeply rooted trauma, with follow-up and meditation therapy to strengthen her will to live.

Case 2
A 45-year-old man, a truck driver married for 5 years with 4 children, was referred with decline of libido and premature ejaculation. He had experienced a work-related back injury and undergone vertebral fusion surgery for this problem. He continued to experience back and neck pain. A urologist concluded that all test results were normal. Clinically, the patient's reflexes were normal and his Shen appeared vibrant. Noted was some limitation of movement of his back, including lower back muscle tightness and tenderness. The Qi gates were opened by bilaterally needling PC 6 and TH 5; pain management was attempted with GB 30, BL 22, BL 23, BL 40, and BL 60.

Stimulated bilaterally were LU 9, SP 6, SP 9, SP 10, LR 3, LR 8, and KI 10, with moxibustion for tonification and to increase blood flow to the penis. Also stimulated to balance the patient's overall sexual Qi energy were GV 4, CV 4, CV 6, and CV 17. The patient reported relief from pain and enhanced libido.

Case 3
A 35-year-old man, married with 4 children, was referred with generalized pain and fibromyalgia,16 a difficult condition from both an Eastern and Western medical perspective. He was unable to perform sexually, with a lack of interest in sexual intercourse and accompanying erectile dysfunction. The patient reported marital problems due to his sexual inadequacy. The clinical approach for this patient was successful over a 6-month period. Treatment entailed bilateral stimulation of LR 8, LR 13, SP 6, SP 9, SP 10, KI 10, BL 17, BL 23, and LI 11, as well as GV 4, GV 17, GV 20, CV 4, CV 6, and CV 17.

'Aung Conjoint Sexual Alignment Therapy'
Sexual dysfunction is not easily treatable. Composed of physical, mental, and spiritual factors, it is a delicate and complex clinical endeavor. Moreover, it also depends on the behavioral actions and attitudes of each partner in their relationship. The author has found the following technique to be one of the most successful components of the 'conjoint sexual alignment method' (developed over 20 years of integrative family and geriatric medical practice). It is an effective sexual approach in the ongoing relationship between 2 people, in most cases a husband and wife, who experience mutual loss of sexual interest and libido. This approach calls for treating them together with electroacupuncture.

The couple sit or lie down in a mutually pleasurable position, touching their hands or other parts of their body so that the electrical stimulation flows through both of them in a complete circuit; both of them interconnected via PC 8 is optimal.
The man's CV 6 is wired to the woman's GV 4, and the woman's CV 6 is wired to the man's GV 4. Furthermore, bilaterally, the male LR 8 is wired to the woman's SP 6, and both the female and male KI 10 are interconnected (Figure 1). The normal low-intensity electroacu- puncture therapeutic and the normal but flexible treatment schedule are again used. protocol 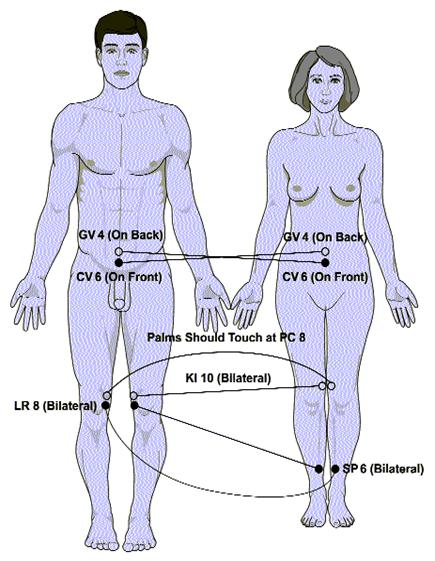 This is a simple but powerful method for enhancing the couple's interest in and concern for one another, as well as mutually balancing their Qi. It enhances their understanding of the need to harmonize their energy for their mutual sexual satisfaction.

Acupuncture is clinically successful in treating some sexual problems. It is effective for rapid symptom control and deeper energy alignment. Other Chinese therapies are useful in this regard, including herbal medicine and dietetics, Qi Gong, and massage/manipulation.17-20 These therapies complement acupuncture just as acupuncture itself complements biomedicine.

Moe G. Western and eastern perspectives on diagnosis and treatment of fibromyaglia: case studies and therapeutic recommendations. Am J Acupuncture. 1996;24:143-158.

Aung SKH. Medicinal applications of fungi and fungal secondary metabolites with emphasis on the use of Ling Zhi in traditional Chinese medicine. Mushroom World. 1992;3:17-23.