General Goal To describe the storage of oxygen and carbon dioxide in blood and tissues, and to provide a framework for understanding how these stores interact.


Specific Objectives The student should:

be able to name the major regions of

drop as blood moves from alveolus to mitochondria.

know the shape of the myoglobin dissociation curve, and be able to state the two major functions of myoglobin.

be able to describe the effects of pH, 2,3-DPG, temperature

be able to describe the effects of methemoglobinemia, carboxyhemoglobin, and anemia on oxygen carrying capacity.

be able to define the Bohr effect, the Haldane effect, and the chloride shift.

be able to quantitate the way in which CO2 is carried in plasma and the red cells.

I.           OXYGEN TENSIONS FROM ALVEOLI TO MITOCHONDRIA

Figure 1. The transport of oxygen in higher organisms requires the presence of concentration gradients at several sites, with the oxygen tension progressively falling from the lung alveoli to the mitochondria in the peripheral tissues where oxygen is consumed.

C.         The partial pressure of oxygen in the mitochondria is often considerably lower than the

at the end of the systemic capillary. It is therefore unfair to use the

of an organ as a measure of its cellular

D.         Diffusion-limited transport. The existence of an end-capillary gradient

in some peripheral tissues is indicative of diffusion limited transport.

oxygen in the cells.

oxygen in the blood.

oxygen in the lung.

A.         Cells without myoglobin have oxygen stores limited by oxygen’s solubility.

B.         Myoglobin is a protein which binds oxygen in red muscle. Red muscle includes the heart which is a continuously working aerobic organ and red skeletal muscle used in the performance of aerobic or endurance exercise.

during changes in cellular metabolism.

Facilitate O2 diffusion through the cytoplasm to the mitochondria where the O2 is used. 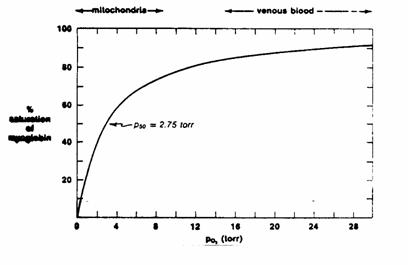 Myoglobin is a single polypeptide chain containing 1 heme group. Each molecule of myoglobin binds one molecule of O2.

levels, a small fall in

causes myoglobin to release most of its oxygen for use (steep part of curve).

O2 Partial Pressure. (Also called oxygen tension.) Units are mmHg. The partial pressure of oxygen is proportional to the amount of O2 dissolved in blood. Partial pressure differences are of significance in determining the rate of diffusion between blood and tissue.

O2 Content. Units are ml O2/dl blood. These are often written ml/dl. An older synonym is Vol%. By convention volume units are substituted for molar units (moles/liter) although the later could be calculated by the gas law. O2 content is the total amount of oxygen in a deciliter of blood and includes both dissolved and hemoglobin-bound oxygen, but dissolved [Hb] is normally negligable. Ignoring dissolved Hb:

O2 Saturation. This is the fraction or percentage of all the hemoglobin binding sites that are currently occupied by oxygen. Units are usually percent.

Since dissolved O2 content is normally negligible, saturation can be thought of as content/capacity.

D.         Hemoglobin contains 2 alpha chains and 2 beta chains each of which contains 1 heme group. One molecule of hemoglobin can bind 4 molecules of O2.

From above, the oxygen binding capacity of blood with a normal hemoglobin is: 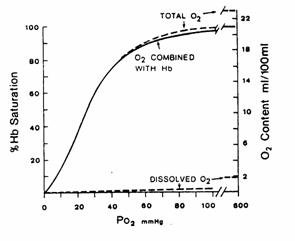 The Hill coefficient is 2.8 (not the expected 4) because cooperativity is not complete.

The P50 for hemoglobin (half the binding sites saturated) is 27 mmHg as opposed to 2.8 mmHg for myoglobin.

If there were no cooperativity (Hill coefficient of 1) and a P50 = 27 mmHg, then hemoglobin would take up less O2 at the lungs (only 79% saturated at

) and would give up less O2 as 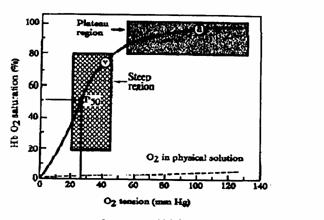 Figure 5. Oxygen-hemoglobin dissociation curve. The “driving” pressure for loading O2 onto Hb is arterial O2 tension, which is represented by the amount of O2 physically dissolved in solution: a = arterial; v = venous; P50 = O2 tension required to saturate 50% of the hemoglobin.

Hemoglobin is 90% saturated even when arterial

falls to 60 mmHg. This is because the upper portion of the curve is relatively flat.

In systemic capillaries where blood

hemoglobin becomes desaturated, i.e., it releases oxygen for uptake by cells. This is the steep portion of the curve.

Normally hemoglobin gives up less than half its O2. There is reserve in the system. If systemic capillary

falls further (eg. in exercise) there is plenty of additional O2 available from hemoglobin.

H.         Tabular oxygen dissociation curve (*remember these to sketch your own)

A.         Changes in hemoglobin affinity for oxygen result in a change in P50. Note that the maximum oxygen capacity is not changed. (change in Km not Vmax.) 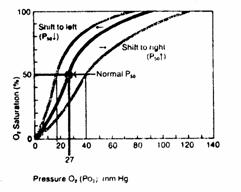 Increased hemoglobin affinity for O2. The oxygen dissociation curve shifts to the left. P50 is reduced.

Decreased hemoglobin affinity for O2. The oxygen dissociation curve shifts to the right. P50 is increased.

C.         Shifts in the oxyhemoglobin dissociation curve have a maximal effect on oxygen unloading at the tissues because the curve is steep at venous 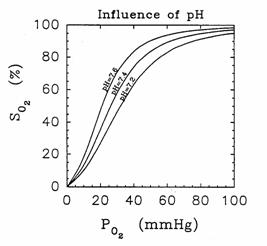 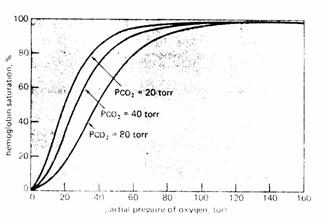 A secondary part of the Bohr Effect is due to the fact that CO2 reacts covalently with hemoglobin to form carbamino hemoglobin which has a reduced O2 affinity.

The Bohr Effect plays a significant role in oxygen unloading under normal, physiological conditions. The P50 of a “venous” oxygen dissociation curve may be as high as 35 mmHg as compared to the normal arterial value of 27 mmHg. 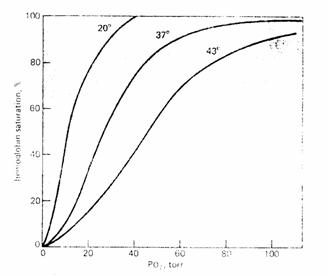 and decreased pH all promote oxygen unloading at the tissues by increasing P50 (decreased affinity).

Increased levels of 2,3-DPG may be seen in:

A.         Hemoglobin Concentration. Hemoglobin concentration will change from its normal value of 15 g/dl as hematocrit changes. 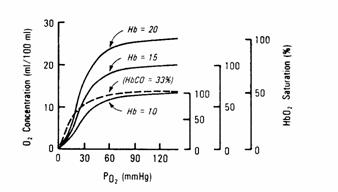 Anemia will decrease the oxygen carrying capacity of blood without independently altering the P50 of blood.

Polycythemia will increase the oxygen carrying capacity of blood without independently altering the P50 of blood.

B.         Carbon Monoxide. Carbon monoxide binds hemoglobin at the oxygen binding sites to form carboxyhemoglobin. It has approximately 210 times the affinity of oxygen. 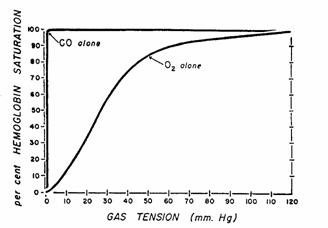 Occupation of binding sites by CO effectively eliminates them for O2 binding and therefore reduces O2 binding capacity (see figure in Section A above).

Because of the complex cooperativity between hemoglobin subunits, binding of some sites by CO also reduces P50 for oxygen binding. Note that this does not occur with anemia.

C.         Methemoglobin. The heme groups of hemoglobin normally contain ferrous iron (Fe++) whether bound to oxygen or not.

Oxidizing Agents. Certain drugs and chemicals (eg. nitrates, acetanilide, sulfonamides) can oxidize the heme Fe++ to Fe+++. The resulting hemoglobin is called methemoglobin and does not bind O2. The total oxygen carrying capacity is reduced by the amount of hemoglobin that is methemoglobin.

the dissolved CO2 concentration is 3.4 ml/dl.

C.         Carbon dioxide is carried by the red blood cell in three forms. 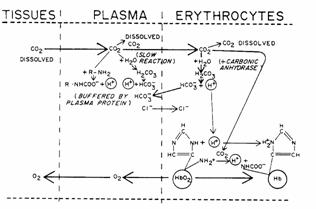 Carbamino compounds. Approximately 30% of RBC contents is hemoglobin. CO2 can form carbamino hemoglobin on amine groups. The H+ released by this reaction is buffered by histidine residues (imidazole group) on the hemoglobin itself.

Bicarbonate. Carbonic anhydrase is present in RBCs and catalyze the formation of carbonic acid which dissociated to hydrogen ion and bicarbonate. The H+ is buffered by hemoglobin.

is formed it diffuses out of the red cell. Cl- diffuses into the red cell to maintain electroneutrality. This is the Chloride Shift or Hamburger Shift.

The chloride shift is rapid and is complete before the cells exit the capillary.

The osmotic effect of the extra 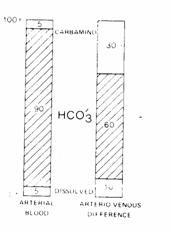 90% of arterial CO2 stores are carried as

Of the CO2 added in systemic capillaries, 60% is added as 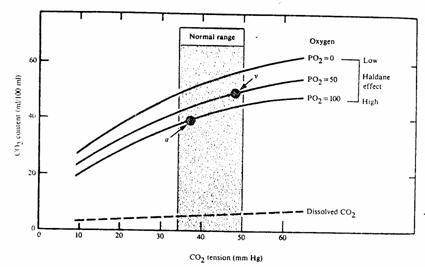 B.         Haldane effect. Increasing O2 tension decreases the affinity of hemoglobin for CO2. As a result the CO2 “dissociation curve” shifts downward.

promotes CO2 unloading in the lungs. 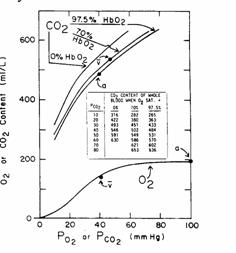 The CO2 dissociation curve is approximately linear (a straight line) in the range of arterial and venous blood. Thus, if equal volumes of blood of 2 different CO2 contents are mixed together, the resulting

will be half way between the starting

The O2 dissociation is curved between arterial and venous points. Thus, if equal volumes of blood of 2 different O2 contents are mixed together, the resulting blood will have a

which is not centered between the original

cause changes in [H+] by mass action.

TABLE 1. Effects of adding CO2 to fluids with and without buffers other than bicarbonate

has a larger effect on pH.

have somewhat blunted effect on pH.

What is meant by the term P50?

What is the Bohr Effect? The Haldane Effect?

List four factors which will increase the P50 for hemoglobin. What is the functional significance of an increase P50 (rightward shift in the O2 dissociation curve)?

How will each of the following affect

How does oxygen unloading in tissues affect carbon dioxide uptake by blood?

How does oxygen loading in lungs affect carbon dioxide release from blood?

What role does the chloride shift play in carbon dioxide transport by blood?

In what form is carbon dioxide carried in blood? What is the percent contribution of each?

Calculate the oxygen carrying capacity of a person with hemoglobin concentration of 18 g/dl. What is his approximate arterial saturation if his

In a normal person, what would be the O2 saturation at a

Of what significance is the fact that the CO2 dissociation curve is linear over the normal range? Hint: how does this affect mixing of blood?