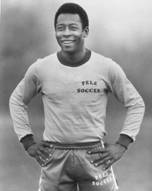 Athlete, professional soccer player. Born Edson Arantes de Nascimento on October 23, 1940, in . Although he was poor, Pelé grew up to be an international sports superstar. Throughout his childhood, he played soccer whenever and wherever he could, sometimes using a stuffed sock for a ball. He joined his first soccer team at the age of 12.

Pelé started playing professional soccer while in his teens. In 1958, he helped win its first World Cup victory. His performance in the finals—scoring two goals—made him an international sensation. He also played for the professional Brazilian team from 1956 to 1974 and scored more than 1,000 goals during his time with the club. He retired from in 1974, but was lured back to the game with an offer from a team in the the next year. He joined the New York Cosmos, a part of the North American Soccer League. As a member of the Cosmos, Pelé became a household name in the and fans flocked to see him play.

Retiring for the second time after the 1977 season, Pelé has pursued his own business opportunities, such as a coffee company and a sports and marketing firm. Along with his ventures, he has served as a spokesman for numerous international companies. Pelé does a lot of charity work, especially for children's organizations.

Footballer, born in . Diego Armando Maradona became Argentina's youngest ever international in 1977, transferred to Boca Juniors for ₤1 million as a teenager, and in 1982 became the world's most expensive footballer when he joined Barcelona for 5 million.

He broke the record again in 1984 when the Italian club paid ₤6-9 million for him. He captained to their second FIFA World Cup win in 1986, having eliminated in the quarter-finals when he scored a highly controversial goal. At the height of success, his career then foundered amid accusations of drug-taking. Following a 15-month ban, he returned by popular demand, though without a club, to the World Cup side as captain in 1994, but was again suspended from the team following a positive drug test. He signed for in 1995 and announced his retirement in 1997.

In 2000, he developed a severe heart condition following cocaine use, subsequently moving to for two years treatment for drug abuse. In 2003, he was reunited with the son he had previously refused to recognize as his own. His health improved by 2005 when he began a new career as a television chat-show host. Most guests were drawn from the worlds of football and show business, including Zidane and Ronaldo, but also included interviews with other notable personalities such as Fidel Castro and Mike Tyson.

Footballer, born in , . As player, coach, manager, and administrator, he became a dynamic force in German football during the 1970s. With club Bayern Munich (1962–76) he had many successes in domestic and European football, among them three European Cups in a row (1974, 1975, 1976). He captained the West German national side to European Nations Cup success in 1972 and to the World Cup triumph of 1974. Other honours include European Footballer of the Year (1972, 1976). He retired from international soccer in 1977 after winning 103 caps, a record at that time. He became manager of in 1986, and in 1990 became the first person to have won the World Cup (united ) both as a captain and a manager. He is currently president of FC Bayern and in 1998 was appointed vice-president of the German Football Association. 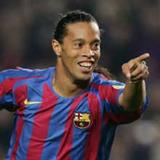 Brazilian soccer star Ronaldinho was born Ronaldo de Assis Moreira on March 21, 1980, in . He's named after fellow Brazilian soccer star Ronaldo. His career began with the youth team Gremio in Porto Algere, and his first senior appearance came in 1998 Libertadores Cup. In 2001, Ronaldinho left Gremio to play European football and signed a five-year contract with Paris Saint-Germain, but his manager Luis Fernandez claimed that he was too focused on the nightlife rather than on his football.

On July 19, 2003, he was traded to F.C. Barcelona for 18 million pounds and on December 20, 2004, he was named FIFA World player of The Year. Ronaldinho also plays for the Brazilian National team, and made his debut on June 26, 1999, against , and won the 2002 World Cup with the team. He is married to dancer Janaina Nattielle Viana Mendes, and they have a son named Joao.