A mousetrap is a specialized type of animal trap designed primarily to catch mice; however, it may also trap other small animals. Mousetraps are usually (though not necessarily) set in an indoor location where there is a suspected infestation of rodents. There are various types of mousetrap, each with its own advantages and disadvantages. Larger traps are designed to catch other species of animals; such as rats, squirrels, other small rodents, or other animals. 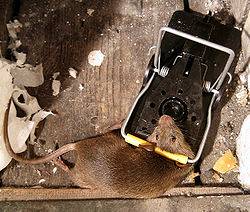 The first mouse trap was invented by William C. Hooker of Abingdon Illinois, who received US patent for his design in 1894. James Henry Atkinson, a British inventor who in 1897 invented a prototype called the 'Little Nipper', probably had seen the Hooker trap in the shops or in 'advertisements' and used it as the basis of his model.

The traditional type was invented by Sir Hiram Stevens Maxim (who also invented the Maxim gun). It is a simple device with a heavily spring-loaded bar and a trip to release it. Stereotypically, cheese is placed on the trip as bait. Other food such as oats, chocolate, bread, meat, butter and peanut butter are also effective. The spring-loaded bar swings down rapidly and with great force when anything, usually a mouse or a rat, touches the trip. The design is such that the mouse's neck or spinal cord will be broken, or its ribs or skull crushed, by the force of the bar. Rats can easily escape from a mousetrap, so a larger version is used for them. Newer spring mouse traps have a plastic extended trigger made to look like a piece of Swiss cheese that is the color of American cheese. This is not intended to attract the mouse, but is to provide a larger surface area for the trigger mechanism and provides reservoirs for bait to be applied, such as peanut butter.

John Mast of Lititz, Pennsylvania obtained an American patent for a similar snap-action device in 1899.

Some modern plastic designs have the advantages that the trap can be set by the pressure of a single finger on a tab and that a dead mouse can be removed from the trap without touching the corpse.

This lightweight mousetrap consists of a set of plastic jaws operated by a coiled spring and triggering mechanism inside the jaws, where the bait is held. The trigger snaps the jaws shut, which can kill many rodents.

This more recent type of mousetrap delivers a lethal dose of electricity when the rodent completes the circuit by contacting two electrodes located either at the entrance or between the entrance and the bait. The electrodes are housed in an insulated or plastic box to prevent accidental injury to humans and pets. They can be designed for single-catch domestic use or large multiple-catch commercial use.

Other trap designs catch mice alive so that they can be released into the wild. It is important to release the mouse promptly – as mice can die from stress or dehydration – and at some distance, as mice have a strong homing instinct. Survival after release is not guaranteed, since house mice will tend to seek out human buildings, where they might encounter lethal mousetraps or may be eaten by predators. In the wild, house mice are very poor competitors, and cannot survive away from human settlements in areas where other small mammals, such as wood mice, are present.

A mouse stuck in a glue trap. A mouse can be removed from a glue trap by pouring vegetable oil over it.

Glue traps made using natural or synthetic adhesive applied to cardboard, plastic trays or similar material. Bait can be placed in the center or a scent may be added to the adhesive by the manufacturer. Glue traps are used primarily for rodent control indoors. Glue traps are not effective outdoors due to environmental conditions (moisture, dust) which quickly render the adhesive ineffective. Glue strip or glue tray devices trap the mouse in the sticky glue; users can free the mice from the glue by applying vegetable oil. These types of trap are effective and non-toxic to humans.

However, death is much slower than with the traditional type trap, which has prompted animal activists and welfare organisations such as PETA and the RSPCA to oppose the use of glue traps. Many mice eventually die from exposure, dehydration, starvation, suffocation, or predation, or they are killed by people when the trap is checked. Others die from injuries or blood loss as they try to chew through their own limbs in an attempt to escape. In some jurisdictions there have been proposals to ban glue traps, or to legally restrict their use. Other jurisdictions have banned their use.

The bucket trap is another method to trap mice. A ramp leads to the rim of a container holding some water or other liquid such as antifreeze.

The mouse is attracted to the top of the container and, by various means and baits, it enters the water. Being unable to get out, it drowns. The suffering of the mouse can be shortened to a small extent by adding a surfactant, such as washing detergent, to the water.

The variations are many with some being single catch and some multi-catch. Some can also be used for live catching of mice.

The RADAR mousetrap, invented by Rentokil Pest Control, kills trapped mice or other rodents with carbon dioxide, then notifies the user by e-mail so that the trap can be quickly emptied and reset. Rentokil claims that the trap is painless and also reduces future mouse deaths by pinpointing the exact location of the trap and how many animals are caught so that their access can be controlled by sealing access holes. PETA has recognized this product as an 'animal friendly achievement