THE JOINTS OF WOOD ELEMENT

THE JOINTS OF WOOD ELEMENT

The wedges are joining tools with different shapes and cross-sections made-up in wood or steel; they are used in order to embed the relative displacements of joined elements.


The following edge types are used:

- wooden prismatic wedges which can be: transversal, longitudinal or oblique function of the grain direction with respect to elements to join;

- smooth rings wedged (split rings and circular rings) used especially for joining inclined elements (they are made in steel, having the shape of a closed ring or cut after the generatrix);

- tooth rings wedged made in a corrugated steel sheet, in which the teeth are cut on both edges (this is pressed into joint and then is fastened by bolts passing through the wedge axis);

They are used for prolongation joints of tensioned elements or for composed beams made by overlapped elements; there are not used for truss joints. Wooden wedged joints are characterised by deformation in first loading phase and smaller deformation in time. The safety of the joining depends on a proper mounting. For prismatic wedged joints, the elements may be in direct contact or they may have spaces between them.

Transversal prismatic wedges are made of hardwood (oak, beech impregnated with antiseptical substances). Each transversal wedge is composed by two elements having an oblique side. In order to assure their adjustement, transversal wedges are longer with 2…3 cm than the width of joined elements.

Longitudinal prismatic wedges may be straight or oblique and are made in softwood, without knots or other defects, having the grains straight and parallel with the grains of elements to be joined.

Oblique prismatic wedges have the advantage that, as they are not being subjected to shear, present a higher safety in exploitation.

The bolts embedded wedges twisting are, usually, located at the middle of the distance between wedges.

They are usually used in truss joints and sometimes in prolongation joints. Smooth rings are mounted in proper dwellings performed in joining elements. These types of rings are stiffened with screws and washers, located in the ring center, in order to maintain the contact between surfaces of joining elements.

split rings are cutted after the generatrix, the space is equal to (0,05…0,1)dp, where dp is the inner diameter of ring;

smooth annular wedge must penetrate each joined element a depth equal to half of the wedge height, hp;

the width of joining elements, b, must be greater with 4 cm than inner ring diameter;

the minimum thickness of boards used must be at least 58 mm or bp+30 mm.

The wood portion enclosed by steel ring is considered efficient for shear.

The no. of smooth wedged joint is computed using the relation:

axial effort that ocuurs in joined elements, in N;

- capable effort for a single wedge, in N, the value is minimum one between crushing capacity (

), established with the relations:

are design values of strengths in compression (crushing), respectively shear parallel with grains, function of wood species, quality class of wood and exploitation conditions for timber elements, in N/mm2;

mu – coefficient of wood used inside of ring, with value: 0,8;

b is distribution coefficient of tangential stresses on shear area with values:

0,125 for joints which transmits compression efforts;

0,250 for joints which transmits tension efforts;

ka - reduction coefficient of smooth wedge capacity with respect to the angle between effort direction and grains direction with values given in table 8.5.

Figure 8.15. Other types of split rings

Tooth annular wedges are made up in steel corrugated strip, wedge teeth are cutted and sharpened (see figure 8.17) in order to penetrate the wood. These kind of wedges are mounted with special presses in joining elements.

Spike grids have pointed square tapered teeth protruding from both sides and are made of galvanized steel. They are available in flat, circular, flat-square and single- and double-curved square shapes (see figure 8.16). The flat grid is used to conect overlapping flat members. The single-curved grid is used to conect a flat to a round and semiround member. The double-curved grid is used to connect two round members. The spike grids are installed by pressing together the members to be joined and are designed to transmit shear loads. The required bolt is not assumed to transmit any shear.

Shear plates are capable of transferring large shear forces. They are used to attach beams to columns through steel straps, in the fabrication of heavy timber trusses by using steel splice plates, and quite extensively for connections between glulam members of timber structures. Shear plates are also used in pairs to make wood to wood connections.

Shear plates require that a groove be cut and a hole be drilled by using a special tool. The shear plates does not provide a wedge fit; thus a shear-plate joint will allow greater slip than a split-ring joint and is less likely to cause a wood member to split as a result of shrinkage due to seasoning of wood in service. The bolt or lag screw in a shear-plate joint serves a dual function of clamping the joint together and assisting in transferring the load. 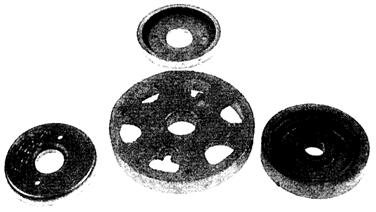 The advantages of this kind of joints consists of:

the possibility of carrying out elements having efficient sections with respect to loading conditions;

rational use of different wooden material categories function of loading;

do not produce the section weakings of the joined elements;

one can use wood elements having reduced sections and lengths;

one can made built-up sections;

if they are rationally made, glued laminated elements have elastic and mechanical properties better than of the ordinary wood elements due to the possibility of corect resizing of the different qualities for wooden material when one has to built-up transversed sections according to the magnitude and the nature of stress occuring in the section;

glue laminated timber have a greater fire resistance due to their greater dimensions and to glue pressence.

Glues used for wooden constructions must satisfy the following conditions:

minimum failure strength of glued joints subjected to joint shear for any type of glue used for construction elements, must be at least equal with 6 N/mm2 for hardwood and 8 N/mm2 for soft wood;

must be waterproofed (minimum shear strength of the glued layer after 1h of soilling or 24 h of water immersion must be at least 15 N/mm2);

must be resistant to fungi attack;

must not be toxic.

The glued joints must fulfill the following conditions:

load transmisssion from one element to another must take place by the occurance of same shear efforts in the glue layer;

tensioned efforts normal to glue layer are not admitted;

minimum length of boards and planks used for glue laminated elements must be 2,5 m, and the minimum thickness of 50 mm;

in case of arches, plank thickness must be > 1/300 of curvature radius;

the boards and planks arrangement must be such that the annual rings to be orriented in the same sense in order to reduce the interior stresses that may occur due to shrinkage deformations;

boards and planks glued joints are built jointed (for compressed and bend elements, straight or curved in compressed zone as well as in the low stressed central zone), an bevelled surface and toothred wedge jointed (in tensioned elements and in hardly torsioned zone of bend elements, or in elements subjected to buckling);

in case of glue laminated elements having the transversal section width > 14 cm, in order to reduce supplementary internal stresses in glued joints, the boards and planks must have maximum width 14 cm and must be located in succesive layers along the height;

the glued elements are pressed with a pneumatical hydraulic or normal press, the value of pressure depends on the section height, on the plank thickness, on the quality of surface (a too big pressure may result in glue spalling).