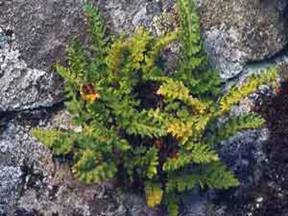 Woodsia Ilvensis: is a rare fern, it has wintergreen leaves that are between 4 and long. (Fitter R. et al, 1984) Spores were collected in 2002 from different sites including Feshie, Woodale and Moffat site 2.

Woodsia ilvensis is classified as endangered, it is protected under Schedule 8 of the Wildlife and Countryside Act 1981 (Joint Nature Conservation Committee, 2007). It is a small fern found on rocky outcrops above 350m. Currently there are less than 100 plants remaining in distributed between 11 sites, 6 of which are in (UK Biodiversity Group, 1998).

It is known that woodsia ilvensis would have been widespread in around 10,000 years ago, as the glaciers retreated at the end of the ice age. The reasons of its decline are unclear but climate change and over-collection during the 19th century are thought to be factors responsible for the diminishing population in (UK Species Action Plan, 2007). In an unfortunate cycle the increasing rarity of the fern was responsible for a boom in collecting during Victorian times (P. Lusby and J. Wright, 2001).

As well as holding the conservation collection of woodsia ilvensis that represents most of the genetic variation of the population. The Botanical gardens also regularly monitor the wild plants. A local conservation collection is maintained grown from spores taken from the few remaining plants (under licence). Some of these plants have been used for re-introductions into areas where the fern was once known.

Fitter R., Fitter A. and Farrer A. (1984) Collins guide to the Grasses, Sedges, Rushes and Ferns of Britain and Northern Europe © William Collins & Sons Co Ltd, .

Their History, Ecology and Conservation