Future versions of this preview information will be provided in the Windows Driver Kit (WDK).

The current version of this paper is maintained on the Web at:
https://www.microsoft.com/whdc/system/vista/

References and resources discussed here are listed at the end of this paper.

Implications for Services and Service-Hosted Drivers

Guidelines for Services and Service-Hosted Drivers in Windows Vista

This is a preliminary document and may be changed substantially prior to final commercial release of the software described herein.

This White Paper is for informational purposes only. MICROSOFT MAKES NO WARRANTIES, EXPRESS, IMPLIED OR STATUTORY, AS TO THE INFORMATION IN THIS DOCUMENT.

Complying with all applicable copyright laws is the responsibility of the user. Without limiting the rights under copyright, no part of this document may be reproduced, stored in or introduced into a retrieval system, or transmitted in any form or by any means (electronic, mechanical, photocopying, recording, or otherwise), or for any purpose, without the express written permission of Microsoft Corporation.

Microsoft may have patents, patent applications, trademarks, copyrights, or other intellectual property rights covering subject matter in this document. Except as expressly provided in any written license agreement from Microsoft, the furnishing of this document does not give you any license to these patents, trademarks, copyrights, or other intellectual property.

The names of actual companies and products mentioned herein may be the trademarks of their respective owners.

In Microsoft® Windows® XP, Microsoft Windows Server 2003, and earlier versions of the Windows operating system, all services run in the same session as the first user who logs on to the console. This session is called Session 0. Running services and user applications together in Session 0 poses a security risk because services run at elevated privilege and therefore are targets for malicious agents who are looking for a way to elevate their own privilege level.

The Microsoft Windows Vista operating system mitigates this security risk by isolating services in Session 0 and making Session 0 noninteractive. In Windows Vista, only system processes and services run in Session 0. The first user logs on to Session 1, and subsequent users log on to subsequent sessions. This means that services never run in the same session as users applications and are therefore protected from attacks that originate in application code.

The following figures illustrate the changes. In Windows XP and Windows Server 2003, sessions are assigned as follows:

In Windows Vista, sessions are assigned as follows: 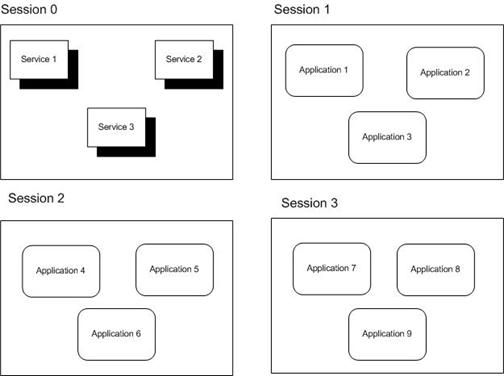 In Figure 2, again three users are logged on to the system. However, only services run in Session 0. The first user logs on to Session 1, and Sessions 2 and 3 represent subsequent users.

Because Session 0 is no longer a user session in Windows Vista, services that are running in Session 0 do not have access to the video driver in Windows Vista. This means that any attempt that a service makes to render graphics fails. In current builds of Windows Vista, querying the display resolution and color depth in Session 0 reports the correct results for the system up to a maximum of 1920x1200 at 32 bits per pixel (bpp).

Implications for Services and Service-Hosted Drivers

Printer drivers, which are loaded by the spooler service.

All drivers that are authored with the User-Mode Driver Framework (UMDF) because these drivers are hosted by a process in Session 0.

Any functionality in a service or a service-hosted driver that assumes the user is running in Session 0 does not work correctly in Windows Vista. Some examples of places where this assumption might occur are:

A service attempts to create a user interface (UI), such as a dialog box, in Session 0. Because the user is not running in Session 0, he or she never sees the UI and therefore cannot provide the input that the service is looking for. The service appears to stop functioning because it is waiting for a user response that does not occur.

Because services run in Session 0, named objects created or opened by services are usually in BaseNamedObjects. However, if a user application assumes that it is running in the same session as the service and synchronizes with the service by creating or opening objects with the Local prefix (or no prefix, which defaults to Local), the application no longer works as expected. This is because the create or open request is specific to that session (due to the Local prefix) and the objects that the application creates or opens are in Sessions<n>BaseNamedObjects instead of BaseNamedObjects. The correct way for user applications to synchronize with a service is to explicitly use the Global prefix when creating or opening objects in BaseNamedObjects.

These implications for services are also exposed through FUS in Windows XP because every user on a FUS-enabled machine runs in a different session. Services that assume that the user is running in Session 0 encounter the same issues when the second user logs on to a FUS-enabled machine. However, services that were not fixed to work with FUS encounter problems in Windows Vista even if only one user is logged on.

Guidelines for Services and Service-Hosted Drivers in Windows Vista

To work properly in Windows Vista, drivers that are hosted within a service should follow these guidelines:

Use a client/server mechanism such as remote procedure call (RPC) or named pipes rather than window messages to communicate with applications.

Implement any necessary user interface for the service as follows:

Use the WTSSendMessage function to create a simple message box on the users desktop. This allows the service to give the user a notification and request a simple response.

Explicitly choose either the Local or Global namespace for any named objects, such as events or mapped memory, that the service makes available. If an object must be accessible to user applications, it must be created in the Global namespace to be accessible to other sessions. The following Microsoft Win32® functions all accept named objects: OpenEvent, OpenMutex, OpenSemaphore, OpenWaitableTimer, OpenJobObject, and OpenFileMapping. Care should be taken when using these functions to ensure that the named object is accessible within the current session.

The option of enabling the Interactive Service Detection Service will be available for customers who have legacy services that send user interaction dialog boxes to Session 0 instead of the corresponding users session. This workaround will be removed from the next version of Windows, at which time all applications and drivers must handle Session 0 isolation properly.

In beta 2, the service will be demand start by default and will start only when a visible dialog box that is not a command window is detected. If the service is started, then users will be notified when a dialog box or window (including a command window) appears in Session 0. Information about each of the last ten dialog boxes will appear in turn if more information is shown. This will help ensure that beta testers are aware of legacy services in their environment and have the opportunity to contact the vendors for updated services.

The service will detect these visible dialog boxes or windows and send a notification to the user. Users may choose to:

Respond to the dialog box immediately by clicking a button to switch to Session 0, interact with the task dialog box, and then switch back to their session.

Be reminded again in 5 minutes. They will continue to be reminded until the dialog box closes.

After Interactive Services Detection Service is disabled, then users will no longer receive notifications when the devices/services send dialog boxes to Session 0.