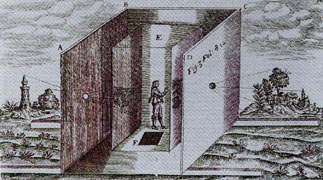 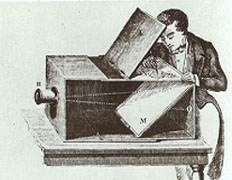 Hundreds of years ago, artists discovered the camera obscura. They noticed that light coming through a keyhole into a dark room casts an inverted image on the wall. They built a camera obscura by setting a lens into a two-foot square box and placing a sheet of glass opposite the opening. Through the camera frame, the artist saw the view which he or she wished to draw. The artist then traced the image reflected on the glass frame. In this way, artists used an early form of a camera picture to give their drawings realistic perspective and detail. 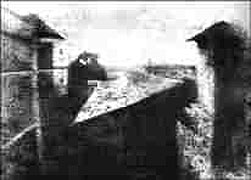 It was a French man, Nicephore Niepce (pronounced Nee-ps) who produced the first photograph in June/July 1827. By using chemicals on a metal plate, placed inside of a camera obscura, he was able to record an obscure image of the view outside of his window. He called his process 'heliography' (after the Greek 'of the sun'). The image is difficult to understand, but there is a building on the left, a tree, and a barn immediately in front. The exposure lasted eight hours, so the sun had time to move from east to west, appearing to shine on both sides of the building. Another problem is that he had difficulty 'fixing' the image so that it would not continue to darken when exposed to light. 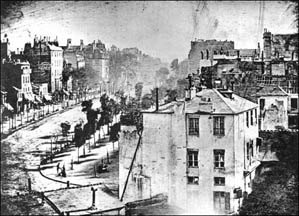 Daguerre (pronounced Dagair) is the most famous of several people who invented more successful and commercially applicable forms of photography. He regularly used a camera obscura as an aid to painting in perspective, and this had led him to seek to freeze the image. In 1826 he learned of the work of Niepce, and in January of 1829 signed up a partnership with him. The partnership was a short one since Niepce died in 1833, but Daguerre continued to experiment. He was able to reduce the exposure time to thirty minutes, and in 1837 he discovered a chemical process which would permanently to fix the image. This new process he called a Daguerreotype. Drawbacks at this time included the fact that the length of the exposure time ruled out portraiture; the image was laterally reversed (as one sees oneself in a mirror); and that the image was very fragile. Another drawback was that it was a 'once only' system (since it was fixed to metal). Soon, exposure times were reduced to a matter of seconds, and portraiture became a commercially viable purpose for the new technology. It would be up to George Eastman to introduce flexible film in 1884, allowing multiple images to be produced on light-sensitized paper. Four years later he introduced the box camera, and photography could now reach a much greater number of people. With his slogan 'You press the button, we do the rest' he brought photography to the masses. 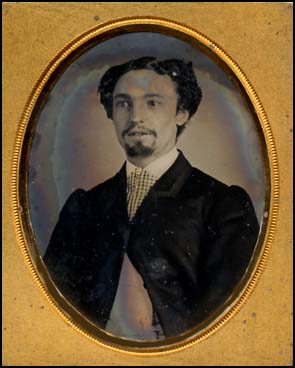 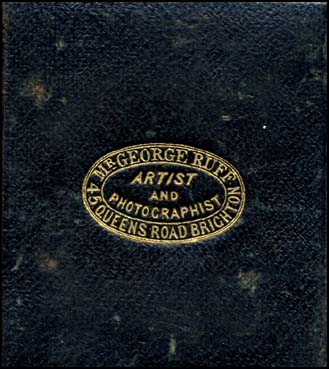 Frederick Scott Archer's collodion 'wet plate' process produced a glass negative which could make an unlimited number of prints on paper. However, most customers were seeking a cheap alternative to the handsome daguerreotype portrait, which came protected under glass in a metal frame and presented in a velvet-lined, leather-bound display case. Scott Archer soon realized that by underexposing the collodion glass negative and placing it on a black background, the image took on the appearance of a positive picture.The resulting image was as sharp and clear as a daguerreotype, yet Archer's new process was cheaper and less complicated. Furthermore, the collodion positive process was incredibly quick to perform. Photographers could see immediately the commercial possibilities of a cheap and speedy method of taking portraits. The 'collodion positive' photograph on glass could be backed with black paper, very dark varnish or provided with a background of black velvet or similar dark cloth. Protected by glass, placed in a metal frame and inserted in a presentation case or an elaborate frame, the collodion positive was an inexpensive substitute for the daguerreotype portrait, which in the 1840s had been the preserve of the nobility and the wealthy middle classes of society.

In 1879, experiments resulted in the dry plate, a glass negative plate with a dried gelatin emulsion. Dry plates could be stored for a period of time. Photographers no longer needed the cumbersome and time-consuming portable darkroom. In fact, photographers began hiring technicians to develop their photographs, and the art of photo finishing was born. In addition, dry processes absorbed light quickly so rapidly in fact that the tripod could be stored in the closet and the camera held in the hand. With the speed of the film and the influx of hand-held cameras, action shots became more feasible.

In 1888, George Eastman, a dry plate manufacturer in , invented the Kodak camera. For $22.00, an amateur could purchase a camera with enough film for 100 shots. After use, it was sent back to the company, which then processed the film. The ad slogan read, 'You press the button, we do the rest.' (A year later, the delicate paper film was changed to a plastic base, so that photographers could do their own processing.)

Most people embraced this new technology with great enthusiasm. A few religious zealots, however, claimed that it was the work of the devil. Many artists who had trained for years in the techniques of portrait painting were also to find it a threat to their livelihood. Some painters dubbed the new invention 'the foe-to-graphic art.' A number of artists turned to photography for their livelihood, while others cashed in on the fact that the images were in monochrome, and began coloring them in. Some painters also used photography to assist them in painting (some of these artists were Gauguin, Cezanne, Courbet, Lautrec, Delacroix and Degas). Photography would eventually change the purpose of painting from one which focused on outward facts of reality to more emphasis on personal vision.