He invented a way to entertain himself by coming up with a solo cricket game where he used a golf ball and a stump. His solo game became one that would help him develop in ways that he never recognized until later on with the stump and ball practice perfecting his speed. At the age of twelve, Donald Bradman would cross over a phenomenal milestone when he reached his first century and scored over one hundred runs while playing cricket for .

Donald Bradman would realize many career successes and easily gained the notoriety as one of the most prominent sports figures in Australian history. His career records includes a 99.94 test batting average and he is said to be one of the best if not the best, statistics in major sports.

Donald Bradman was a sports leader needed during the Great Depression His fan base never faltered and his fans followed him throughout a twenty-year career. He wasn’t always polite to the media and he was often viewed as controversial because of rocky relationships that ranged from teammates to the journalists who reported on his games.

A superstar in his own right, Donald Bradman married in 1932. At his wedding, uninvited guests looked on as they waited to see the great Donald Bradman marry. His honeymoon would be spent on a tour filled with cricket-playing opportunities.

In 1940, Bradman joined the Royal Australian Air Force. He would later be transferred to the Army and placed on lighter duty but it would soon be discovered that Bradman had poor eyesight and suffered from chronic pain, now widely accepted and recognized as fibromyalgia.

Donald Bradman would go on to tackle administrative positions within the game he adored as well as write passionately about it. He will forever be remembered as one of the greatest batsman of all time.

was an English cricketer. He was born in 1882 at and died in 1963. He started his first-class cricket career playing for Cambridgeshire in 1904 before joining in 1905, staying with them until 1935 and scoring a record 61237 runs in first-class cricket and a record 197 centuries. He played in every Test Match for between 1907 and 1930, establishing himself as an outstanding opening batsman with his partner Herbert Sutcliffe. In 1926 he captained , the same year scoring a record 316 runs at Lords. He was the first crircket player to be knighted, in 1953.

Was one of the finest bowlers in cricket history. In 27 test matches he took a phenomenal 189 wickets at an average of 16.43 runs per wicket. He bowled at varying speeds, between Fast and Slow Medium and could impart Leg spin or Off spin on the cricket ball to achieve a prodigious amount of turn off the pitch at any pace. He is also the only cricketer to be selected to play for while playing league cricket.

Sydney Francis Barnes was born on the 19 April 1873 in , Staffordshire. He was the second of five children and worked for the same company in for 63 years. He briefly played county cricket for but played the majority of his cricket for Staffordshire in the Minor Counties Championship and league cricket. His record for Staffordshire was 1441 wickets at a cost of 8.15 runs per wicket. 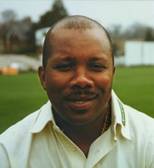 Was a right-handed batsman and a right-arm fast bowler of . was considered to be one of the great fast bowlers in the history of cricket. debuted in the ODI in 1980. He ended his career in 1992. In his ODI career, has taken 157 wickets in 136 matches at an average of 26.96. His best bowling figure in the ODI is 4 wickets for 18 runs. He has scored 955 runs in his career, 66 being his highest. has taken 15 catches in ODI. This great bowler of died from cancer in 1999.

Malcolm Marshall has played in the World Cup thrice in 1983, 1987 and 1992. In 11 World Cup matches, Marshall has scored only 40 runs with the highest 18 runs. He has taken 14 wickets in the tournament, 3 wickets for 28 runs being his best bowling figure.