Soccer is a game of skill of which players use their feet to move a ball down the field (roughly the size of a football field) and kick it into the other team's goal. A soccer game consists of two 45-minute halves. Any time used to treat injured players or issue penalties gets added to the end of the game. Each team needs seven players, including the goalkeeper, to play, but usually each team usually plays 11 players at a time. While some positions vary and get a bit fancy, soccer players cover for basic positions.

The goalkeeper (also called goalie, keeper or goal tender) is the only player allowed to touch the ball with his/her hands while the ball is in play. S/he stays near the goal and may use his/her hands within the penalty box, which is the larger of the two boxes drawn on the field that extend from the goal. His/her main duty is to stop every shot from entering the goal.

The defenders play in front of the goalie and defend the goal. They usually pass the ball to players farther up the field rather than dribble the ball toward the opponent's goal themselves.

The midfielders (also called half-backs) usually run more than the other players. They move the ball between the defensive and offensive ends of the field with a combination of dribbling and passing. While they play the entire length of the field, they often position themselves between the defenders and the forwards.

The forwards are the players who score the most goals. They usually play between the midfielders and the other team's goal. Most of the forwards' game is to dribble briefly and shoot the ball to try to score.

The basic rules of soccer mostly deal with putting the ball into play.

Before the game, a coin toss determines which team gets to choose between picking which goal they'll defend and kicking off to start the game. To kick off, one of the forward players kicks the ball off the center line, usually to a teammate.

When the ball goes out of bounds on either side of the field, which ever team did not touch the ball last gets to throw the ball back into play. The throw in takes place at the point where the ball left the field and requires a player to throw the ball with both hands extending from behind his head while keeping his feet on the ground.

When the offensive team makes the ball goes out of bounds at the end of the field (aptly called an end line), the defensive team gets a goal kick. A player from that team may kick the ball from the ground anywhere within the goal area. The ball cannot be touched again until it leaves the penalty box.

Some of the basic rules of soccer gives penalties to teams and players who break them. Those rules include players using their hands and any action the referees deem dangerous play and inappropriate play.

Hand infractions and other not-so-serious fouls give indirect free kicks to the other team. The player to kicks during the free kick may do so from the point of the infraction, as determined by the ref. The ball must touch one other player before going into the goal.

Dangerous plays and other physical contact infractions lead to direct free kicks for the other team. During a direct free kick, the ball may go directly into the goal for a score, without touching any other players first.

If an infraction occurs within the penalty box (or penalty area), the other team gets to kick the ball directly at the goal from a point 12 feet away, with no players other than the goalkeeper in the way. During a penalty kick, the goalkeeper must not move until the ref blows his whistle to start the kick.

If a player violates the rules or shows unsportsmanlike conduct, the referee can issue a caution. The caution is called a yellow card, which is the color of the card he shows the player as a warning.

If a player makes an extreme infraction, the referee can kick that player out of the game by showing her a red card. A player can also receive a red card by getting two yellow cards during one game.

If a player passes the ball to a teammate who has moved into the defensive team's end of the field ahead of the ball, the team would be called off-sides. The other team would then get an indirect kick. Players cannot be called off-sides during goal kicks, corner kicks and throw ins. Off-sides is usually the most confusing rule.

The length of the pitch for international adult matches is in the range 100–110 m (110–120 yd) and the width is in the range 64–75 m (70–80 yd). Fields for non-international matches may be 91–120 m (100–130 yd) length and 45–91 m (50–101 yd) in width, provided that the pitch does not become square. The longer boundary lines are touchlines or sidelines, while the shorter boundaries (on which the goals are placed) are goal lines. A rectangular goal is positioned at the middle of each goal line. The inner edges of the vertical goal posts must be 7.3 m (8 yd) apart, and the lower edge of the horizontal crossbar supported by the goal posts must be 2.44 m (8 ft) above the ground. Nets are usually placed behind the goal, but are not required by the Laws. 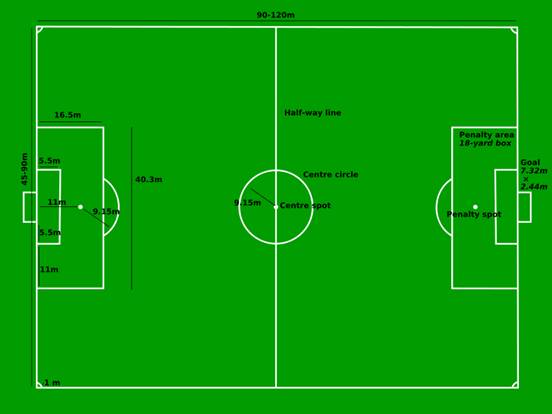 pitch perpendicular to the goal line, and a line joining them. This area has a number of functions, the most prominent being to mark where the goalkeeper may handle the ball and where a penalty foul by a member of the defending team becomes punishable by a penalty kick. Other markings define the position of the ball or players at kick-offs, goal kicks, penalty kicks and corner kicks.

The ball used in football (soccer) is called a football (or soccer ball). The ball is an air-filled sphere with a circumference of 68–70 cm, a weight 410–450 g, inflated to a pressure of 8–12 psi, and covered in leather or 'other suitable material”. The weight specified for a ball is the dry weight: older balls often became significantly heavier in the course of a match played in wet weather. The standard ball is a Size 5. Smaller sizes exist: Size 3 is standard for team handball; others are used in underage games or as novelty items.