Configuration Settings for a Four-Node Cluster

Configuration Settings for a Four-Node Cluster

As shown in Figure C.1, the recommended configuration for a four-node Microsoft® Exchange Server 2003 cluster contains three active nodes and one passive node, where each of the active nodes contains one Exchange Virtual Server (EVS). This configuration is advantageous because it provides you with the capacity of running three active Exchange servers, while maintaining the failover security provided by one passive server. 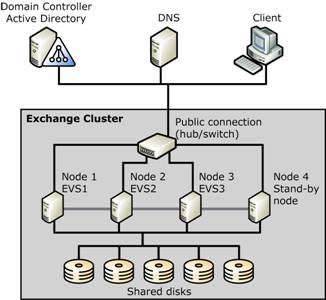 The recommended four-node cluster can handle a single node failure at a time and maintain 100 percent availability after the failover has occurred. A second failure during this period leaves the cluster in a partially up state. To illustrate this concept, here is an example:

Tables C.1 and C.2 list the recommended configuration settings for this four-node cluster.