A beam with a straight longitudinal axis subjected to transversal loads acting in its longitudinal plane of symmetry deforms and the resulting curve is called the deflection curve. In the previous lecture, the curvature of the deflection curve was used to determine the stress and strain distribution in the cross-section of a beam under the restrictions established for pure and nonuniform bending. In this lecture, the equation of the defection curve will be derived and consequently, the displacements at any point of the beam may be calculated. The calculation of beam deflections is an important part of structural analysis and design. The deflections are limited to prescribed tolerances imposed by the functionality of the particular structural element.

The cantilever beam pictured in Figure 1 deforms in its vertical plane of symmetry under the action of the exterior transversal loading.

Qualitative Interpretation of the Deflection Curve

with the radius of curvature

- moment of inertia about the horizontal centroidal axis of the cross-section;

- radius of curvature of the deflection curve.

Note: If the material is homogeneous linear elastic and the beam is of uniform cross-section the product

is called the flexural rigidity and is constant.

From the relation given by equation (1), the deflection 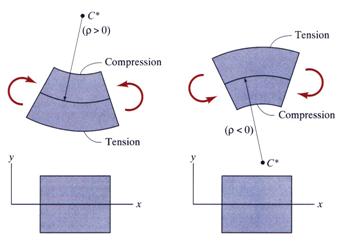 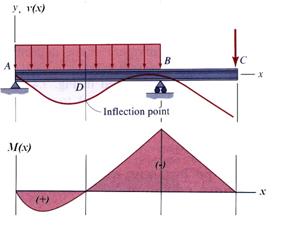 Differential Equations of the Deflection Curve

From Calculus it is known that the slope of a real function at any particular point of its defined continuity interval is the first derivative of the function. For the case in point, the real function is represented by the beam displacement curve

. Using the notation shown in Figure 1 the following relation is written:

Under the assumption of small displacements, the first derivative is a very small value:

consequently, the angle can approximate by its tangent:

In Calculus the relation between the radius of curvature

Under the small displacement assumption (3), equation (5) can be simplified and written as:

The moment-curvature equation, a second order differential equation, is obtained from equation (7) and expressed in the following standard form:

Consider the differential relation between the transverse loading and the cross-section stress resultants,

, previously obtained from the equilibrium of the beam infinitesimal volume element:

are the vertical shear force and the bending moment, respectively.

Differentiating the moment-curvature equation (8) and using equations (9) and (10) the shear-deflection and load-deflection equations are obtained:

The load-deflection equation (12) is a forth-order differential equation.

If the beam is made from a homogeneous linear elastic material and has a constant cross-section in the continuity interval of the bending moment or transversal loading equations (8) and (12) became:

For the case of a beam with constant bending stiffness

, the integrals expressed in equations (13) and (14) may be simplified as follows:

are calculated by imposing the boundary conditions of the specific problem at hand.

Integration of the Load-Deflection Differential Equation

Successive integration of the forth-order differential equation (12) in a continuity interval of the transverse loading function yields the following relations:

are calculated by imposing the boundary conditions applicable to the specific problem.

For the case of a beam with constant bending stiffness

, the integrals expressed in equations (17) through (20) may be considerably simplified as follows:

As previously stated, the functions (15) though (21) obtained above, represent the general solutions. Only after the boundary conditions are imposed and the integration constants determined the solutions became representative for a specific case study.

The boundary conditions commonly encountered in the application of the equations (15) and (16) or equations (21) through (24) are presented in Table 1.

In general, the transverse load

and the bending moment 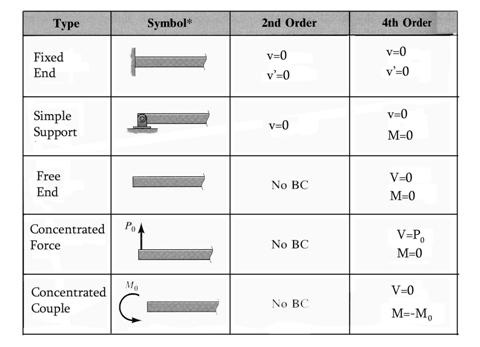 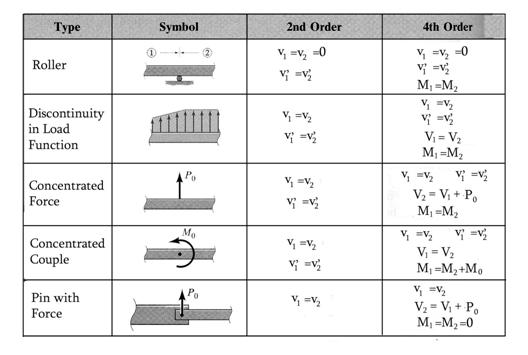 The methodology used in the application and integration of the moment-curvature (8) and load-deflection (14) differential equations is illustrated in examples 4.1 and 4.2, respectively.

Application of the Moment-Curvature Equation

and a concentrated bending moment

both acting at the tip of the beam, point B. The beam is characterized by a constant cross-section along its entire length, with geometry and loading as shown in Figure 4.

, are found using the equilibrium equations: 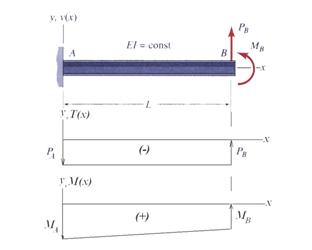 diagram is continuous on the entire length of the beam and is expressed as:

Using equation (28) in the moment-curvature equation (13), the problem specific differential equation is obtained:

Integrating the differential equation (29) twice yields the following expressions for deflection and slope:

are identified using the boundary conditions at point A:

Substituting equations (34) and (35) into equations (30) and (31), the final deflection and slope expressions are obtained:

The maximum deflection value is obtained at the tip of the cantilever:

and the corresponding rotation

In the absence of the concentrated force

Application of the Load-Deflection Equation

from the fixed support A. The beam has a constant flexural rigidity along its entire length.

The reaction force and moment at point A are obtained by solution of the equilibrium equations: 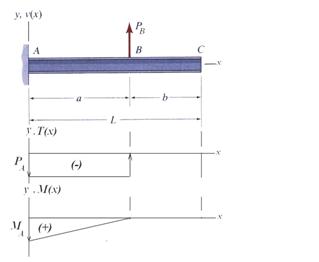 The transverse load has two continuity intervals, AB and BC, and, consequently, the forth-order differential equation must be integrated for each one of them as:

Solving the system of algebraic equations (57) through (64) the integration constants are calculated:

Substituting the integration constants (65) and (66) into equations (48) through (51) and (53) through (56), respectively, the variation of the shear force, bending moment, slope and deflection for each interval are obtained:

The deflection and slope at points B and C are: