The conventional temperature on-off control is based on the following [1]:

- if the process temperature is lower than the set point, the supply nominal voltage is applied on the heating elements;

- if the process temperature is greater than the set point, the heating elements are disconnected from the voltage supply.

The final output element of an on-off controller is usually an electromechanical relay or a contactor [2], [3]. In both cases mobile contacts realize the closing or opening of the electric circuits that supply the heating elements [4], [5]. Because of the electromechanical component parts (coils, elastic springs and mobile armature), the contacts closing and opening are realized with electrical and mechanical delays [6].

Consequently, the static characteristics of these on-off controllers have an insensibility zone (hysteresis) 2Δ, on all sides of the set point SP, as presented in fig. 1 [7]. In a temperature conventional control loop with inertial process (dead time τ and time constant T) and inertial transducer (with time constant Tt) after the implementation of an on-off controller and after the linearization of non-linear characteristics in an exponential form, it results a dynamic behavior like in fig. 2. In the system appear self maintained auto oscillations of the controlled parameter on both sides of the ideal value SP, with the amplitude 2X dependent on the value of the controller insensibility zone 2Δ, respectively on time constants T, Ti and dead time τ.

Because of the process inertia and the transducer inertia, the resulting oscillations amplitude 2X is bigger than the insensibility zone 2Δ of the on-off controller [1]. More, even at 2Δ ≈ 0, in the system annoying oscillations appear.

Fig. 2.- The evolution of the temperature Θ and the actuating signal U for conventional on-off control: 1- the oven temperature; 2-the transducer temperature.

The big amplitude 2X of the temperature oscillations is due to as a matter of fact that the disconnecting, respectively the connecting of the heating elements from the power supply, is performed at the moments t1, t2, etc., when the transducer temperature reaches the release value (SP+Δ), respectively the connecting value (SP-Δ), and not at moments when the oven temperature reaches the mentioned values. Because of these delays, the power source delivers in the oven a supplementary thermal energy that is accumulated in the brickwork and in the treated pieces from the oven. The oscillations 2X amplitude depends on the following elements: the controller 2Δ insensibility zone, the oven and transducer dynamic behaviors, the oven power reserve, the transducer assembling place, the oven load, etc. The temperature control quality is characterized by the overshoot value after the oven start moment, by the oscillations 2X amplitude and by the realized temperature average value. If the oscillations are symmetrically given by the reference SP, then the temperature average value will coincide with the set point, otherwise a ΔSP error appears so much the more the oscillations are more non symmetrically over the set point [8].

In order to decrease the presented drawbacks, caused by the delayed disconnection over the set point, in the paper it is proposed and experimented a new on-off control algorithm, named with “inverted hysteresis”. The static characteristic of such controller is presented in fig. 3.

It has been fond that the heating elements disconnecting from the power supply U is made in advance from the set point SP, achieving in this way an “anticipated” commutation. 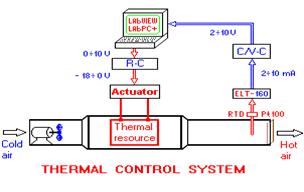 The achieved installation is composed of the above-mentioned process, equipped with a RTD Pt 100 transducer, signals converters and an IBM PC with a LabPC+ acquisition board. In the computer, the LabVIEW development medium is installed. The conventional on-off control algorithm (fig. 1) and the proposed control algorithm, with „inverted hysteresis” (fig. 3), have been implemented as „Virtual Instruments” in LabVIEW development medium.

In fig. 5 and 6 sequences from these algorithms are presented. In the first case, a symmetrically insensibility zone is realized.

This symmetrically insensibility zone is adjustable by the operator with the help of a button on the frontal panel, the commutations are made at PV = SP + Δ = r1, respectively at PV = SP - Δ = r2.

In the second case, the insensibility thresholds are separately adjustable (Delta 1 and Delta 2 from fig. 6), with the aid of some buttons from the frontal panel of the application. Consequently, in this case, the commutations are made at PV = SP + Δ1 = r1, respectively at PV = SP – Δ2 = r2. More, the control algorithm takes into account the controlled speed temperature variation (ΔPV).

Fig. 6.- Sequence from the on-off control algorithm with „inverted hysteresis”.

After the conventional on-off control algorithm implementation (fig. 5) for the control system presented in fig. 4, some experimental results were obtained, for different values of the set point, of the symmetrically insensibility threshold, as well as for the cases when a transducer without protected sheath is used or when a transducer with protected sheath is used. The recording sequence obtained when a transducer with protected sheath is used and when the set point was 60 oC at the installation start, is presented in fig. 7. Then, the set point was modified from 60 oC to 90 oC. It is noticed the appearance of some non-symmetrical self-oscillations, with the amplitude 2X > 2Δ, because of the delayed disconnecting of the heating elements from the power supply, at PV=SP+Δ.

In table 1 are presented the results of the experimental data processing corresponding to the graphic from fig 7.

The on-off control algorithm with inverted hysteresis, from fig. 6, was implemented for the control system presented in fig. 4. Some experimental results were obtained, for different values of the set point, of the symmetrically and non symmetrically insensibility threshold, as well as for the cases when a transducer without protected sheath is used or when a transducer with protected sheath is used. The recording sequence obtained when a transducer with protected sheath is used and when the set point was 60 oC at the installation start, is presented in fig. 8, for different insensibility threshold: Δ1 = 0.05 from the set point, respectively Δ2 = 0.15 from the set point. During the working, after the stabilization of the working conditions, the insensibility threshold, Δ1 respectively Δ2, were modified as in table 2. In table 2 are presented the results of the experimental data processing corresponding to the graphic from fig 8.

Fig. 8.– The on-off control with inverted hysteresis of a heating battery.

After the comparing between the obtained experimental data, figures 7 and 8, as well as after the comparing between the control systems performance with conventional on-off controller (table 1) and the control systems performance with the on-off controller with inverted hysteresis (table 2), the using advantage of the last one is evident. The first heating elements disconnecting from the power supply is made, of course, in the moment when the increasing temperature reaches the Δ2 - SP threshold. By an adequately choosing of the Δ1 and Δ2 insensibility thresholds, depending on the plant dynamic performances, a pronounced reduction of the overshoot, the oscillations amplitude in the steady-state regime and a mean value unimportant sliding are obtained. This new control algorithm can be easy implemented on the diverse hardware and software components in order to obtain better performance. Another important advantage, in addition to the good dynamic performance refers to the using possibility of simple, cheap and robust on-off actuators (electromechanical contactors or static contactors).