Events in the Chamber

Events in the Chamber

The real test of a turbo engine and its ability to produce huge amounts of power (without leaving a trail of pungent blue-gray smoke and/or alumişnum/iron shrapnel) boils down to what's happening in the combustion chamşber. Sparking off a controlled temperature mixtureŚcomposed of the right stuff at the right timeŚis the culmination of all the design effort put into the system. When this event transpires correctly, the fun begins.

Igniting the air/fuel mixture in a high-pressure turbocharged engine Is tough. The crux of the matter is that air is an electrical insulator The more air moleşcules packed into the combustion chamber, the greater the voltage required to drive the spark across the spark plug electrodes. Large amounts of voltage are required at high charge densities. Not only are high voltages required, but all items that carry the high voltage must be insulated with materials of high dişelectric strength. This will insure that the voltage really does drive the spark across the plug gap instead of to the valve cover. The tolerance for deterioraştion in these components is small, again due to the high voltages.

Most ignition systems offered as OEM in the late eighties have sufficient voltage to fire off the mixture at modest boost, pressures of 6 to 8 psi. Greater boost pressures will likely require a capacitor discharge ignition supplement to supply consistent ignition. In any system where spark plug life becomes intolşerably short, a capacitor discharge unit will be necessary.

The choice of a spark plug for a turbo engine application is relatively easy. The heat range of the plug is the key factor to get right. Classifying plugs by their heat range has nothing to do with when or how they manage to get the fire goşing. 'Heat range' means no more or less than how the features of the plug are configured to conduct heat away from the electrode. 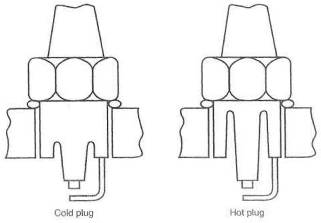 Fig. 9-1. The difference between a cold plug and a hot plug is the ease with which heat is transferred out of the center electrode.

Presume for a moment that it is desirable to have the materials of all spark plugs operate at about the same temperature, regardless of load conditions imposed by the engine. Then the spark plug of a low-speed, low-load, low-compression engine would need to conduct heat away from its electrode slowly, or else the plug would operate too cool. This is called a hot plug. An engine of our liking, clearly, must have plugs that conduct lots of heat away from the electrode. This plug, then, will be reşferred to as a cold plug. The balance to achieve is to keep the plug hot enough to continuously burn the soot and deposits off yet cool enough to keep the maşterials from rapid deterioration. A plug that operates at too high a temperaşture can also serve as an ignition source that actually starts the fire prior to the spark. This is pre-ignition, and it can lead to detonation.

In the actual selection of a plug for a high-pressure turbo engine, the choke should start with a plug about two ranges colder than stock equipment. If the plug deteriorates rapidly or fractures in any way, try a third range colder. Should the plug get dirty and acquire too much resistance to fire, back up one range hotter.

Installation technique will contribute to the plugs' consistency and durabilşity. Certainly all threads and washer seats must be thoroughly cleaned. A propşer spark plug lube, like Never-Seize or molysulfide, should be lightly applied to the threads and between the washer and plug. Top this off with tightening the plug to the manufacturer's suggested torque, and you will have done all you can toward good spark plug performance. Torque specs are usually between 10 and 14 ft-lb for aluminum heads and 10 to 18 for iron.

Igniting the mixture at the right time is also a challenge. The turbo engine adds one more requirement to the design of an ignition curve. Turbulent turbo mixştures burn faster than normally aspirated mixtures, but the denser mixtures slow the burn. While contrary and confusing, this generally leaves the situation not needing to begin the burn quite so soon. The ignition curve can therefore benefit from a small retard function as boost rises and the mixture becomes both denser and more turbulent. The correct ignition timing under all circumşstances is achievable only if the timing curve can be designed right along; with the fuel curve. With today's technology, this can be accomplished only with afştermarket engine management systems. At present, the Electromotive and DFI engine management systems can control both ignition and fuel curves. 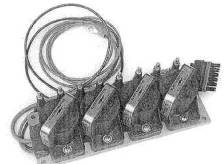 The boost-pressure-sensitive ignition retard offers a limited degree of adjustşability to the ignition system operating under boost. This item can also prove useful in permitting greater ignition advance at low speed and cruise condiştions while reducing top-end advance at high boost pressure. The ignition reştard can easily be judged just a safety device, but it's not quite so. It also allows a rough tailoring of the high end of the ignition curve to the octane rating of the fuel. A singular disadvantage exists with the pressure-activated retard: it will progressively retard ignition as boost rises, even without the presence of detonation. Therefore, timing is less than optimum at these mid-range points, so that it will be right at maximum boost. This translates to a noticeable loss of mid-range torque. Less torque + less power = less fun. 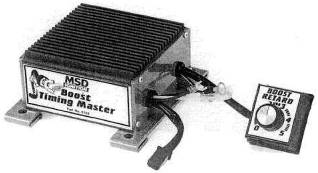 The pressure-sensitive ignition retard could be called a passive device, in that it does not detect the presence of the event it is there to prevent. It retards the ignition based on boost and retard rate setting only. The knock-sensor ignition retard should be called an active device, however, because it detects the presşence of the event and then is charged with the job of eliminating it. The knock sensor does an excellent job of retarding ignition when detonation is detected. This implies that maximum safe power is being developed under the operating conditions at that instant.

For example, add octane, and ignition timing stays forward while power stays up. The knock sensor is an, override safety device that is not the least bit concerned with maximum power. If used in an absolutely correct environment, the knock sensor would remain quietly in the background and never be needşed. Never, that is, until something went wrong, wrong, wrong. A knock-sensor-controlled ignition curve can display a less-than-fun characteristic. A check on the functioning of the system, as frequently stated in service manuals, is to rap on the cylinder block with a hammer, If the sensor detects the knock and reştards the timing, audibly slowing the engine, it is working as designed. Clearly, hammering on the side of the block is not detonation. Why, then, should the retard be activated? Is it possible that a rock bouncing off the block could also retard the timing? How about a failing hydraulic lifter, a water pump bearing, or a broken alternator mount? It is necessary to keep in mind that retarding the ignition raises exhaust gas temperature. This is decidedly a bad thing to do. unless detonation really is present. It is probably stretching the point a bit to suggest that a fast trip down a long gravel road might retard ignition to the point of melting an engine. 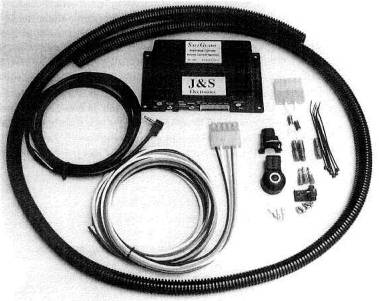 Fig. 9-4. An native knock-detection system with control of ignition timing is an excellent means of establishing a margin of safety for an engine. These items often add power as well as safety, by permitting ignition timing to stay closer to the knock threshold than is possişble when tuning by ear.

Mechanical noise of a high-revving engine can cause some knock sensors to activate when no knock is present. This then becomes a rev-based retard, which is not a desirable device.

The development of a knock sensor into a full-fledged computer that does what its software tells it to do is the most optimistic development yet seen. These are in their infancy, but much progress is being made by J&S Electronşics, Programming will, wouldn't you know, be the key. Perceived downsides of the knock sensor are not always present. It is, however, necessary to consider these possibilities upon purchase adjustment, and use of a knock sensor.

Much can be said about the pluses of a knock sensor. The contribution it can make toward peace of mind is not without merit. The vast majority of turbo system installations are not maximum-effort systems; therefore, small power compromises are not crucial. Therein probably lies the distinction of the knock sensor's value in the scheme of things. Overall, the knock sensor is probably the best thing going for control of ignition timing.

The quality of the fuel offered up to the burning process is key to the functionşing of smooth, powerful turbo engines. High octane, quality refinement, and fast burn rate are the distinguishing characteristics of good turbo fuel, An ocştane rating is solely a measure of resistance to detonation as tested in a lab test engine. Quality refinement is the production of gasolines without unwanted contaminants, often referred to as 'a bad tank of gas,' The combustion rate is just the relative rate at which the fuel burns. Combustion rate has a significant effect on detonation characteristics of the fuel and chamber. If the burn rate can be significantly sped up, the little pockets of mixture hidden off in the exştremes of the combustion chamber won't have time to overheat and explode.

Absolutely wonderful changes take place as detonation is pushed further out of the picture. A hydrocarbon called toluene presents turbocharging; with an intriguing new scope. Toluene is a distillate of oil commonly called methyl benzene. It is a cousin of gasoline. Of some interest is the tact that it is the third component of TNT. That should not imply its power; it is just a curiosity. It does have the remarkable ability to speed up burn rate to such an extent that boost pressures defying imagination can be used. Toluene was the fabled Forşmula 1 car 'rocket fuel' of the mid-eighties. Fourteen hundred horsepower from 90 cid at 75+ psi boost indeed required something out of the ordinary Think about that for a moment in some humorous circumstances. A Mazda Miata with 1450 bhp comes quickly to mind. Or a NASCAR Winston Cup stock car racer with 5800 bhp. An interesting means of having fun, indeed. Presumşably even Richard Petty at his best would have found that a challenge. In the practical use of street fuel, octane rating becomes the most important aspect,

In general, three octane points will offer about 2 psi of boostŚassuming, of course that all other factors remain in line. Reformulated gasolines, which inşclude alcohol, are not generally suitable for use with turbos. Octane improvers are readily available and should be considered a viable means of permitting greater boost-pressure levels. Additive quantities vary with brands, so followşing each manufacturer's recommendations is reasonable. The only downside to octane-improving additives, other than cost and handling, is their dislike for long-term storage after mixing with gasoline. An easy situation to remedy. 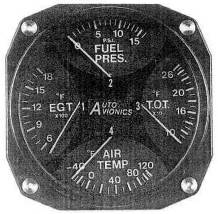 Fig. 9-5. Proper gauging tells how well the system is functioning. These combination gauges package nicely and offer a wealth of information.

What sort of fuel will 1 have to use?

You can use the lowest-octane fuel that insures that the detonation threshşold will remain at a higher boost level than the setting of the wastegate. In reşality, this means the highest-octane fuel currently available. In engines equipped with knock-sensor-controlled ignition timing, power is highly depenşdent on octane. The greater the octane, the less the knock; consequently, the greater the ignition advance.

Is a special ignition system necessary with the turbocharger?

Stock ignition systems are virtually always adequate for the turbo applicaştion. However, three significant gains may be made with a special ignition sysştem: