Saint Ana Lake - Snapshot of a beautiful place from Romania 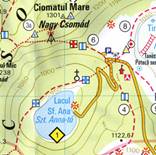 Snapshot of a beautiful place

is a lake of volcanic origin, is the only such lake throughout . The lake is situated on the bottom of the crater of an extinct volcano called Ciomatu (or, as other sources, Ciomadu), the massive volcanic Puciosu, the most recent volcanic eruptions in the Carpathian Mountains in Eastern Europe, held now tens of thousands years (perhaps more now than 42,000 years). 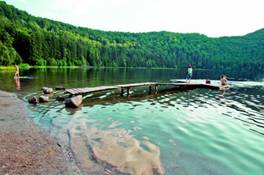 Two young people should get married. The girl, named Ana, which was to become a wife, not because it wanted a forced parents to get married only to get young assets, which was rather churlish in the SEASON. In the evening wedding, the bride ran away and was thrown into the lake, her lifeless body not found any today. Because of this lake is named after the girls. Each year, the patron Saint Ana is hallowed by the Metropolitan seat.