DYNAMIC RESPONSE OF THE CIVIL ENGINEERING STRUCTURES DUE TO MICROTREMOR

dynamic response of the civil engineering structures due to microtremor

Increasing demands on speed increase, higher axle pressures on transportation, overdimensional and heavy loads cause simultaneous increase of unfavorable traffic effects on the structures of railways, roadways, highways and facilities on them and on structures and buildings in the vicinity of busy roads and railways. The theoretical and experimental investigation of traffic effects on the industrial buildings structure in the KINEX a.s – Bearing Processing Building Complex at Bytča are described in this paper.

The complex of bearing processing buildings

in the KINEX a.s Bytča consist of  9 industrial halls with concrete - steel structures. The processing building M6 used for production bearings is tailored to technological function is the nearest building to new constructed road with busy road traffic 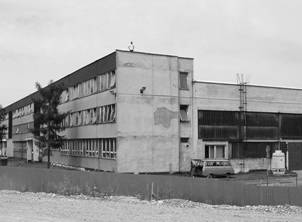 The two versions of computing model was created as an FE model in computing system IDA Nexis which respects all data assumed in project documentation and design calculation. The first version of the computing model considers roofing slabs as a load bearing members connected with joints to truss girders and the second version considers only the mass of the slabs. The first 10 natural frequencies and modes of natural vibration were calculated for this FE model.

Figure 2: An example of natural modes

The dynamic assessment of the processing building M6 was divided to five parts:

The important areas of these tests were to observe microtremor effects on:

Safety of  the building structure

The set of accelerometers (BK 8306) were used for measurement of global and local vibrations in the most representing areas and points of M6 structure [1]. The structure vibration amplitudes were recording using A/D converters, filters, portable computer (PC/DX4) with relevant

Figure 4 shows power spectral spectrum Gv(f) measured at point B 38-x and Figure 5 illustrates the cross power spectrum between points B5 and B6 in horizontal directions. Positions of structure measured points are described in [1].

B599 due to processing + road traffic effect.

The tested structure processing estimation of microtremor effect as a complex of dilated parts is described in several conclusions:

Based on amplitude analysis the danger phase of structure vibrations was observed during the road under construction only. During this phase a rather in old part of building M6 were observed increasing of the structure cracks.

It is necessary to strengthen the cracked parts of building M6 structure.