Tensometric Determination of the Pushing Forces Developed by the Sprinters

Faculty of Physical Education and Sport


Tensometric Determination of the Pushing Forces Developed by the Sprinters during the Start, through the Use of a Block Start That Records the Impulsion Forces through Hodograph Curves

During the year 1980, at Transilvania University of Brasov, there was used experimentally a block start with transducers that recorded the pressure and impulsion forces, both from the point of view of the direction, of the reaction time, which, following the analysis, led to the correction of the support and propulsion angles, as well as of the reaction time.

The issue of the start, considered in general and from the mechanical point of view, is an inertial issue, which is a consumption of human muscular energy in the shortest time possible, in view of overcoming the inertia forces of the mass of the body within the assembly in utter repose.

The start we study is considered the period of time necessary for the acceleration of the entire body under the conditions in which the athlete’s both soles are in contact with the start surface. The initial moment of the start is generally released by an acoustic signal. The final moment of the start consists in the total detachment of both soles from the start surface. The total time of start is divided in two distinct periods:

a)      The period of neural-muscular inertia, in which period the pushing forces remain constant at the athlete’s soles (there is practically recorded no variation in these ones); the constant pushing forces consist in some leaning forces which, for the entire body, are distributed between the arms and the legs;

b)      The so-called acceleration period, which ends with the moment of the distension.

With respect to these aspects we set out to submit a few considerations upon this second period of the start (the experimental block start has however the possibility to measure extremely accurately the first period of time of the neural-muscular inertia, too).

The experimental block start has the following possibilities:

- it records the pushing force and its variation developed in time by each foot, the force that decomposes in two components, one perpendicular and one tangential to the surface of the block start.

there may be adjusted (continuously, not by degrees) the longitudinal distance and the transversal distance between the surfaces, as well as the angle of every surface, according to the sprinter’s psycho-actuating qualities and bio-mechanical qualities.

There may be noted that the useful force is the force perpendicular on the surface of the block start; it is utterly consumed for the acceleration of the athlete’s weight.

The tangential force is not useful; it only applies stresses on the block start which further transmits it to the block support.

Actually, the force developed by the athlete is the vectorial sum of these two components, the perpendicular useful force and the tangential non-useful force. There is given in no.1 an example of experimental lift

a) the tangential components that cannot be nullified should be as little as possible and during the entire start, they should be, from the standpoint of the sense and of the value, approximately symmetrical in relation to the perpendicular on the block surface. This point aims only at the maximal efficiency for each foot taken separately, not taking into consideration the action of the whole body.

The aspect a) may be analyzed, corrected and individualized with the experimental block start. In order to exemplify the hodograph, there may be noted that the start (fig.2 ) lasted 0,40 sec., excluding the reaction time.

The time on the holograph ensues after numbering the curve points. For a more in-depth study, the construction will be carried out on a larger scale, with points lifted at smaller time intervals. In order to exemplify the use of the hodograph, there is noted ( see the double arrows on fig.1) that after 0,20 sec. since the consumption of the reaction time, the athlete(B.F. 10,8 sec.) instantaneously developed a pushing force:

-at the fore leg of 84 daN under an angle against the horizontal of 38 degrees. 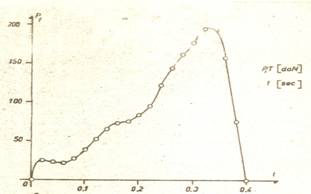 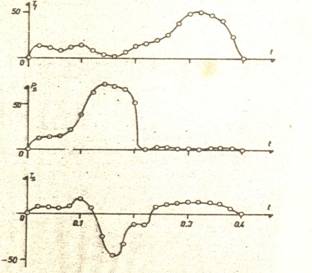 Fig.2 The instrumental recording of the hodograph curves as function of time and force values measured through the points balustered on oscillograms from 0.01sec in 0.01sec


The time on the hodograph curves results after numbering the curve points.

There is noted in the athlete B.F. an erroneous adjustment of the front sole of the block start, and in V.I. an improvement. In both of them there may be accurately determined the correction angle.

The pushing technique for the back leg shows a greater deficit in B.F. than in V.I., because of the insufficient pushing force.

Consequently, there have been revealed, with the help of this apparatus for the analysis and the measurement of the sprinters’ start, a series of phenomena as regards the low start.

The reaction time is the start from the beginning of the start marked by issuing an acoustic or a light signal – and the moment of the apparition of the pushing force. In figure 3 there is presented the shape of the curves for the pushing forces with the help of the device, without representing the reaction time. There is interesting to note that there appear two maximums, among whom the first one is global. 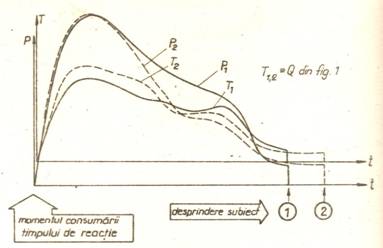 There is offered a new methodology for:

Analyzing and optimizing the sprinters’ start.

Individualizing the adjustment of the block start.

Indicating parameters of force specific to the low start necessary for selecting adapted methods and means during the training.

Determining the peak period in the athletes’ training

Settling by the trainers of some specific indications, which will rapidly lead to the improvement of the sprinter athletes’ start.

There has been currently resumed the research through the improvement of the technological elements component of the block start.